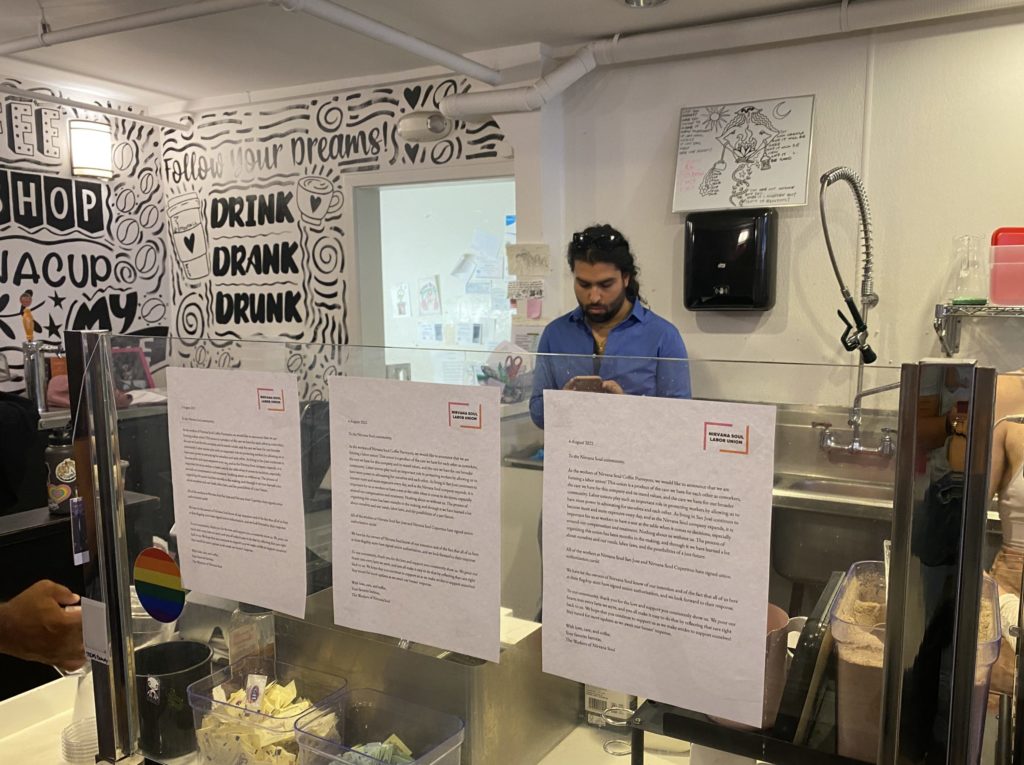 Changes are brewing at a downtown San Jose coffee shop as workers form a union—with the owners’ blessing.

Employees at Nirvana Soul, a Black-owned coffee shop that opened in the SoFA district during the COVID-19 pandemic, announced plans to unionize Thursday during the cafe’s weekly open mic event to more than 100 people. Workers told San José Spotlight that all employees—more than two dozen—have signed union authorization cards.

Workers say they want to ensure fair treatment and wages, as well as more safety protections.

“As the company continues to grow, we want to make sure workers have protections for ourselves,” barista Daniel Rios, an employee since November 2020, told San José Spotlight. He spoke on behalf of all workers. “San Jose is a union strong city, and we’re joining that movement.”

Daniel Rios, a barista at Nirvana Soul since November 2020, said workers want to ensure fair treatment and wages through a union. Photo by Tran Nguyen.

The coffee shop, owned by siblings Jeronica Macey and Be’Anka Ashaolu, is seen as a success story in weathering the economic uncertainty over the last two years. It recently opened a second location in Cupertino. The owners were not immediately available for comment. Chief Finance Officer Dap Ashaolu said the company will support the organizing efforts.

“We have always encouraged our employees to advocate for themselves,” Ashaolu told San José Spotlight, adding the workers’ efforts align with the coffee shop’s values. “To see them come together with an intention to create this union, we’re really excited and proud of them.”

The unionizing effort at Nirvana Soul comes as the country is seeing more workers organize for better conditions and pay. Workers at an Amazon warehouse on New York’s Staten Island, a Trader Joe’s market in Massachusetts and a number of Starbucks stores have made headlines recently for their workers’ successful organizing campaigns.

What’s different is the early support from Nirvana Soul’s owners, as workers across the country are facing a wave of anti-union efforts. Big corporations like Starbucks and Amazon are deploying scare tactics and harassment to deter workers from organizing, news reports show.

In San Jose, Amy’s Kitchen faced protests and claims of union busting from former workers this week after the company abruptly shuttered its factory at 1885 Las Plumas Ave. Workers, who said they faced dangerous working conditions, intimidation and mistreatment by superiors, had been organizing to form a union for a month.

Rios declined to say whether there’s been workplace issues at Nirvana Soul, but noted workers have been organizing for months.

“It is important for us as workers to have a seat at the table when it comes to decisions, especially around our compensation and treatment,” a message posted on the shop window reads. “Nothing about us without us.”

The announcement to unionize—and the owners’ response—have been met with overwhelming support from local residents and worker advocates.

@NirvanaSoulSJ has shot itself up to the top of San Jose coffeeshop power rankings IMO. This is how a coffee shop should respond to union organizing! @sobaylabor https://t.co/48YTd1MGCL

This is how organizations should respond! Great org, greater team, and excellent coffee. https://t.co/7jhyQ9AzbM

Ruth Silver Taube, a local labor and employment lawyer who teaches at Santa Clara University, said national campaigns such as Fight for $15 are empowering workers to organize. She noted essential workers are also joining the movement due to the COVID-19 pandemic.

“(During the pandemic), I saw how little regard the employers had for the workers, and the workers took notice,” said Taube, a columnist for San José Spotlight. She added unions are the only guaranteed protections for workers.

Taube said she has also noticed an uptick in the South Bay with workers organizing for a better workplace.

“It takes a lot of courage to speak up, but workers feel like they don’t have anything to lose, so I do see this as a trend,” she said. “I’m very pleased that (workers at Nirvana Soul) are organizing.”

Mike T, who declined to give his last name, is a frequent customer of Nirvana Soul. He said he didn’t know the workers were organizing, but he supports their efforts.

“It’s always a good thing,” he told San José Spotlight, “I love coming here because of the kind people and the warm atmosphere. And it’s good to support a Black-owned business too.”