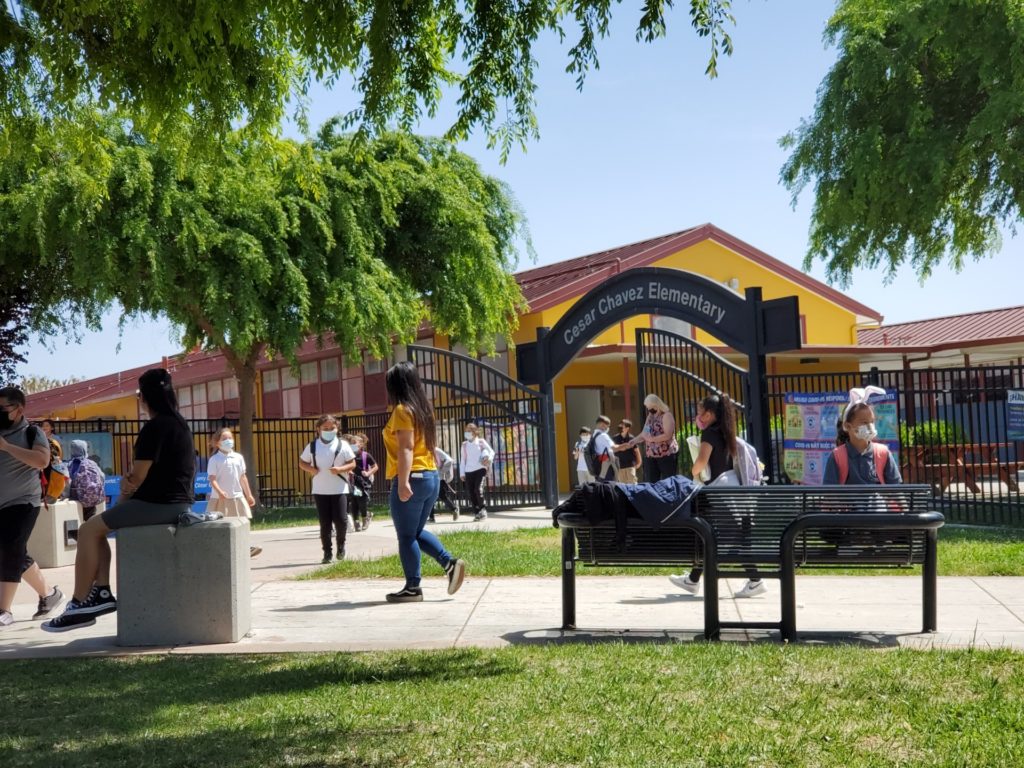 Students from a neighborhood elementary school in Alum Rock Union School District may have to relocate.

The Alum Rock Union School District board of trustees will vote on April 14 whether to turn Cesar Chavez Elementary School into the Cesar Chavez Early Learning Center for children in preschool through kindergarten. Students in grades 1-5 would have to choose another school, while younger students already at the school would remain.

Yesenia Cruz, who has a first and fifth grader at Cesar Chavez, is concerned nearby San Antonio Elementary School, where the students would likely attend, is also on a list of recommended school closures.

“If they’re going to close down our school and San Antonio’s on the list,” Cruz said, “where are our kids going to go?”

Cruz is annoyed by how the school district handled information regarding the closure. Cesar Chavez Elementary School Principal Julio Villalobos invited parents by email to join him and Bauer on March 29 for an in-person meeting “to discuss important site information for the 2022-23 school year.”

“The way they sent out the message, they didn’t say the school was closing, so not a lot of parents showed up,” Cruz told San José Spotlight. “They found out through their children, not the school, what was happening.”

Cruz said students and parents are upset and stressed out from the possibility of having to leave the school.

“We don’t want our school to close,” she said.

If the Alum Rock Union School District board votes to restructure Cesar Chavez Elementary School, students in grades 1-5 will have to change schools. Photo courtesy of Maribel Sepulveda.

Alum Rock Union School District Board President Andres Quintero said the board is “moving in the right direction” to keep the district solvent.

“What has been proposed… is that we’re going to maintain a presence,” he told San José Spotlight. “We’re going to redesign it as a school for very young children.”

Quintero said Cesar Chavez Elementary School currently has about 170 students, but could support 500 or more. He said by changing the school to an early learning center the district would save about $1 million in overhead and administration costs. School partners would bear part of the cost of running the facility and bring in additional funds. One potential partner is Kidango, a group focused on early childhood education.

The loss of students due to attrition has contributed to the district’s financial problems. The Santa Clara County Board of Education added to the district’s woes when it decided to approve 25 charter schools from one organization, he said, as did families moving to the Central Valley.

“We face some significant challenges due to an over-saturation of charter schools,” Quintero said. “We’re developing partnerships that could possibly bring in future revenue so we can continue to maintain our sites and be able to provide an education to our children.”

Quintero said a budget shortfall was projected, although he didn’t disclose the amount. To avoid it, the district had to take action. Repurposing the school is the best option considering the circumstances, he said.

The Alum Rock Union School District merged Clyde L. Fischer and Lee Mathson middle schools with Renaissance Academy at the start of the 2021-22 school year due to a $3 million deficit. Bauer said although one-time government funds provided some stability to the budget, the district must remain “conservative and mindful,” keeping an eye on the third year out.

“It is not easy for me to make this recommendation, but I have to be a good steward of the district,” she told San José Spotlight.

Bauer said the need for a safe place for preschool age children of working families in the neighborhood was a major drive for restructuring Cesar Chavez Elementary School. The district hopes to provide early learning services to a smaller extent at other sites.

Alum Rock board member Corina Herrera-Loera sees the change as a win for the entire community.

“Our students would not only continue to go to school within our district at a nearby school,” she said, “but in addition, we would be able to bring in our younger children, the toddlers we’re not supporting yet, and early learning partners to help pay for the facility.”

But parent Maribel Sepulveda, who has a third and fifth grader at Cesar Chavez Elementary School, said closing the school to grades 1-5 is a loss. She is concerned about her parents having to walk further and face major cross streets to take her younger child to school. Her daughter is worried about having to start over, make new friends and find her way around campus.

Sepulveda said she doesn’t see why the school can’t share space with the early learning center and let students stay.

“I hope they’ve really considered this because it’s impacting a lot of low-income people,” she said. “This is their neighborhood school and they’re taking it from them.”