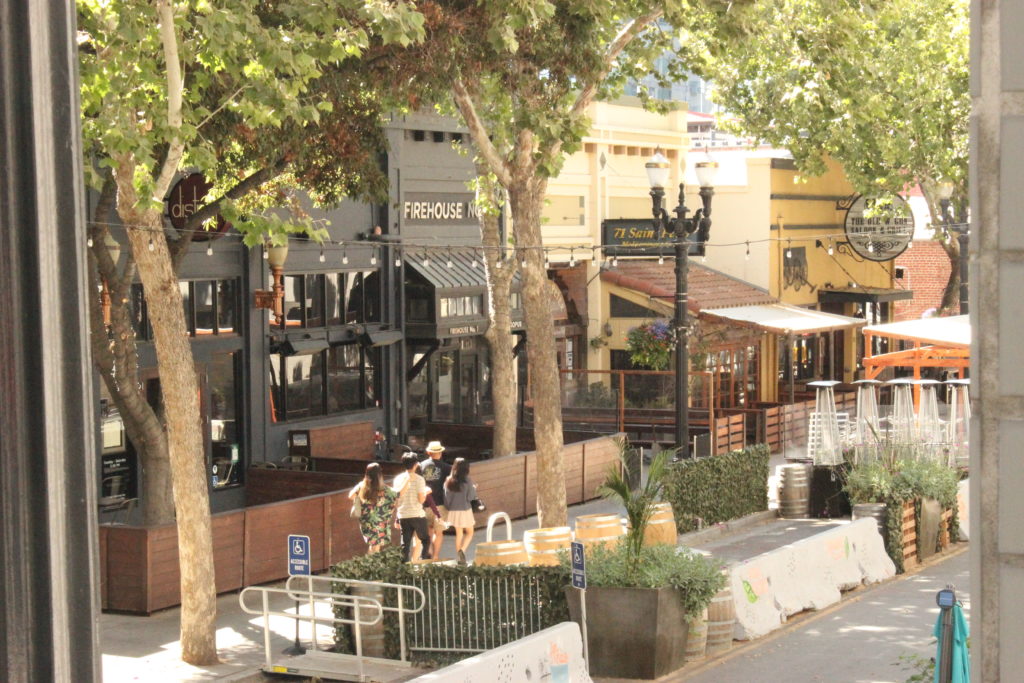 A new analysis shows downtown San Jose is reeling economically from the pandemic – more than its neighboring suburbs.

According to the report, presented at a council committee Monday, the downtown’s recovery has been grim and economically lagging because many of its driving forces, including commercial projects and events, have not returned to pre-pandemic levels.

The report revealed that downtown sales tax plummeted a whopping 38.5% during the past year, compared to the city average which dropped by only 1%. Parking usage rates and revenue also recovered to only 50%-75% of what they were pre-pandemic, indicating less people coming into downtown.

This is in sharp contrast to neighboring communities like Santana Row, a mixed-use development of retail, restaurants and housing, which appeared to bounce back quickly.

City officials said this week the solution for revitalizing the downtown economy is more people living in the city’s core and that would happen through more housing. Just two residential high-rises were completed this past year, adding 1,522 more units.

San Pedro Square, like most of downtown, does not have as much business during the week as the weekend. Photo by Jana Kadah.

“Never was this more evident than during the pandemic, when residents stayed close to their neighborhoods for meals and fulfillment of daily needs,” said Blage Zelalich, deputy director of economic development. “In order to realize its true potential as an active and vibrant downtown core, downtown must attract significantly more residents and provide more housing at varying income levels.”

In an effort to lure more developers to downtown, San Jose has rolled out the red carpet.

Fred Buzo, San Jose director at SPUR, agreed more housing is the No. 1 solution for boosting economic activity in the downtown core. “We can’t go back to the way it was,” Buzo told San José Spotlight. “The pandemic changed the way we live and we can’t expect our old techniques to work anymore. We have to adjust to more people working from home.”

While leaders say more housing is the saving grace for downtown, others will argue it is more commercial activity — offering residents a place to eat, drink and let loose after a busy workweek. There is some improvement there.

There are notable commercial projects in the pipeline, such as the Almaden Office Project and the Paseo Project, which will bring millions of square feet of office space in addition to retail venues.

And despite the pandemic’s pause on community activities, nightlife has picked up and events are back on. Zelalich said over 1.7 million people attended 73 downtown events, such as Christmas in the Park, Viva Calle and First Fridays at the SOFA district, in the past year and it’s expected to increase exponentially.

“As we’ve seen some development continue, new businesses open, it’s been exciting to get that little glimmer of hope,” said Councilmember Raul Peralez, who represents downtown. “Residents in the downtown are really gonna make all the difference.”

Some downtown restaurants are feeling hopeful, too.

Cavicchia said the best thing the city did for his Mexican restaurant on San Pedro Street is close the road as part of the Al Fresco outdoor dining program.

“It gives more of a community feel, more of a neighborhood feel and I think it gets people closer together as opposed to just walking in two doors,” Cavicchia said.