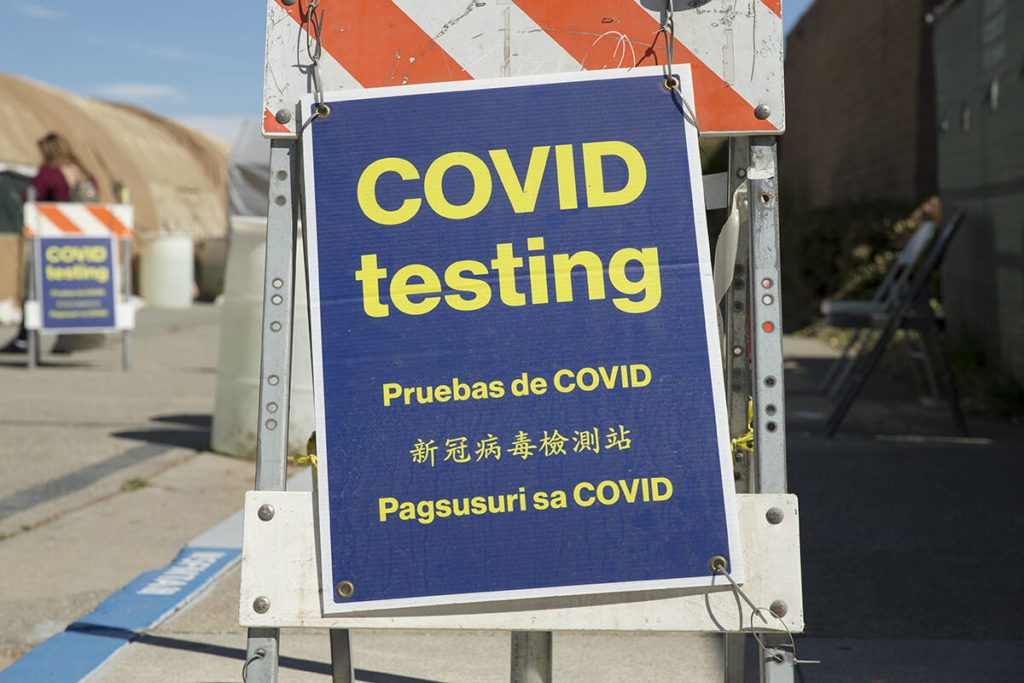 As COVID-19 cases surge to new highs, many San Francisco families are struggling to find appointments or rapid tests for their children before classes resume Monday.

Starting Sunday, the San Francisco Unified School District (SFUSD) will be offering mobile rapid testing at the district office at 555 Franklin St., and at school sites throughout the week as students return from winter break. Until then, students and staff are directed to test through their health care providers or community and city-run sites. Many of those options, however, are facing high demand due to the highly infectious omicron variant.

“Clearly getting a test in San Francisco is a matter of taking a day out of your life to get it figured out,” said Cari Cymanski, a parent and first-grade teacher. “I’m completely overwhelmed and left with no resources. I think we’re unprepared at every level.”

Cymanski was one of many turned away from walk-up COVID-19 testing sites in San Francisco or scrambling for rapid tests this week. She first tried to get herself and her 6-year-old tested at Ella Hill Hutch Center on Monday but struck out. Alemany Farmers’ Market also ran out of tests by the time she was able to make it Tuesday evening. She counted some 25 cars being turned away. CityTestSF on Seventh Street seemed to have tests Wednesday evening but she opted not to wait in the rain without an umbrella.

Thomas Herbert, 6, stands outside the COVID testing site at the Alemany Farmers’ Market after not being able to be tested when the site ran out of kits. (Photo by Cari Cymanski)

Gov. Gavin Newsom announced last week the state would provide schools with enough at-home COVID-19 tests for all 6 million K-12 students in California when they return from winter break. SFUSD isn’t expecting those tests to arrive until next week and is still determining how to get them to students, said spokesperson Laura Dudnick.

Now, parents and other city leaders are saying the district and public health department could be doing more to prevent virus spread on the first day students get back. Expanded testing would have ideally begun Friday or Saturday, rather than overwhelm Sunday capacity, said Supervisor Matt Haney.

“SFUSD should be helping people get tested sometime over the next few days, particularly if they weren’t going to make at-home tests available,” Haney said. “Right now, it seems to me that they’re definitely falling short on providing that access on day one.”

On Wednesday, SFUSD officials released a message to district families with information about returning to campus safely, including a call to get tested before school resumes. Testing is recommended, not required, for students and staff to return to school.

Other Bay Area districts distributed take-home test kits, including Oakland Unified where students were were asked to upload their results to a district website. District of Columbia Public Schools is requiring students and staff to show a negative COVID-19 test result before returning to school.

Defending SFUSD’s testing timeline, Dudnick said, “Any of these programs take time and coordination to implement; it’s just a large scale. The offerings we have available are what we hope are going to work for staff and students. If they can’t get tested, they can still show up because of the other layers of protections we have.”

COVID-19 cases in San Francisco are rising three times faster than during the summer delta surge. San Francisco’s 7-day average case count reached an all-time high of 630 on Dec. 28, according to the New York Times COVID-19 tracker, and cases are expected to continue to increase in the short term.

In San Francisco, 90% of youth ages 12 to 17 have received a complete vaccine series, but only about 46% of children ages 5 to 11 have been inoculated.

“San Francisco has remained vigilant and beat back four surges, and we are well-positioned with a highly vaccinated population to do the same with this current surge due to omicron,” said Grant Colfax, San Francisco director of public health. “Throughout the pandemic, San Francisco schools have remained low-risk settings by following proper safety protocols. Let’s work together to keep it that way.”

United Educators of San Francisco also has no desire to see a repeat of school closures. But the union is pushing for universal testing over the next month to monitor the surge in cases under omicron. At least 10 staffers have tested positive over the break and can’t return on Monday, according to union President Cassondra Curiel.

“It’s not about closing schools at all,” Curiel said. “This is about keeping the schools open and without mass contagion. You can’t do that if you don’t get tested.”

The district will increase its contract with the testing company Color to $12.8 million from $7 million and is seeking reimbursement from the Federal Emergency Management Agency for a portion of the costs, according to Dudnick. In November, San Francisco Unified began distributing self-swab kits to students who were symptomatic or had close contact with someone at a school site.

Some families are satisfied with the level of testing options provided through the district. Max Garrone, whose daughter is in 8th grade at James Lick Middle School, said keeping kids in school was his top concern as cases begin spiking again.

“I’m sure we aren’t the only people who felt this is a really weird holiday break,” said Garrone. “We are all keeping a wary eye on the omicron wave. That’s terrifying. But all the numbers say if you’ve been vaccinated and boosted it’s mostly mild, and kids seem to really not be getting very sick.”

While skyrocketing COVID-19 cases warrant concern, there’s also good news coming out of places such as Denmark and Nebraska, where a study of an omicron outbreak showed the variant has a shorter incubation period — three days compared with four to six days with the delta variant — and was less severe than other variants for the vast majority of vaccinated individuals.

Garrone didn’t have plans as of Thursday to take his daughter, who is fully vaccinated, to get tested before returning to school Monday, but said he would if they find out about a potential exposure or if anyone at home feels sick.

“There is a lot of testing at school sites for families, and they have the capacity available to us which is fantastic,” he said. “I’m happy to have my daughter go back to school and I’m pretty sure all the friends in her cohort are happy about that too.”

But Cymanski says the district should have laid out the recommendations and plans before winter break arrived, noting families often need to see a message several times.

“Scrambling in the last few days doesn’t work,” Cymanski said. “We are not planning for a return to school that is going to be safe both mentally and physically for kids.”

COVID-19 testing times and locations can be found here and families can register for appointments here. Testing options citywide are listed on sf.gov.