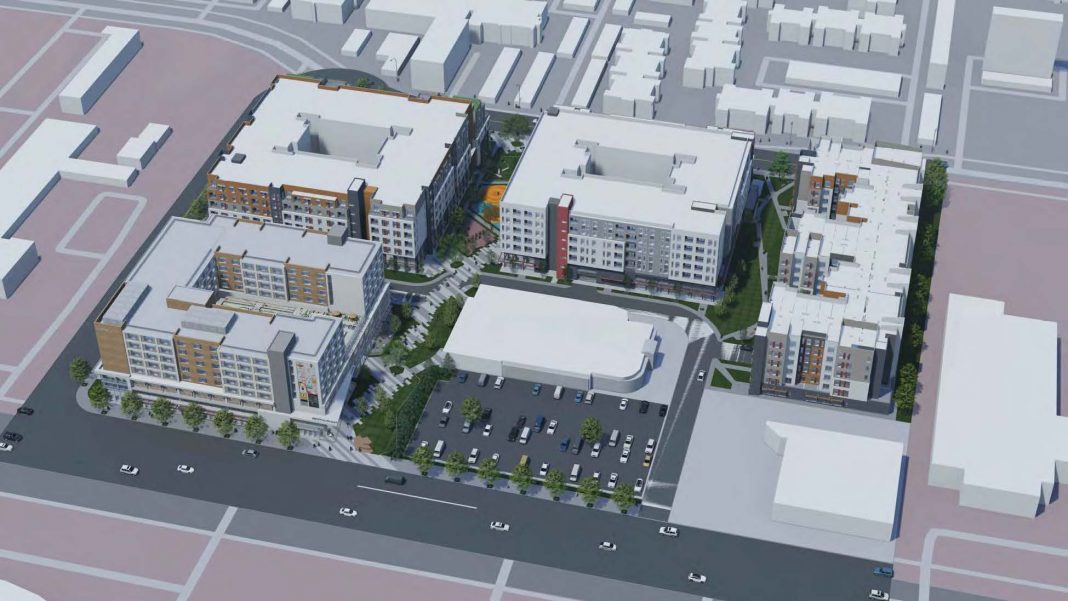 A few gray, nondescript commercial buildings in the northwestern corner of San Jose will be replaced by nearly 600 condos and hundreds of hotel rooms, as part of a project several years in the making.

The San Jose City Council on Tuesday unanimously approved the latest version of a development from Los Angeles-based Miramar Capital known as Stevens Creek Promenade. A prior version of the plan was approved by the city council in 2019, but never went into development. The new iteration will not include office space, a major change from the previous plan. Mayor Sam Liccardo called the old plan “a missed opportunity for vibrant, mixed-use development.”

Instead, Miramar’s plans call for three existing buildings on the roughly 10-acre site to be demolished and replaced with three new buildings that will house 580 condominiums. Of that total, one building will be dedicated entirely to 173 below market-rate condos.

The developer will also build a 250-room hotel with about 8,500 square feet of retail space on the ground floor, according to city reports. The hotel represents one of the major changes in the development.

A rendering shows the layout of a redesigned version of the Stevens Creek Promenade project approved by the San Jose City Council on Aug. 30, 2022. Image courtesy of San Jose.

In a prior version of the project approved by the city council, the site would have included roughly 233,000 square feet of office space. The San Jose Planning Commission approved the current version in July.

Tom deRegt of Miramar Capital told the council increased construction costs and lack of interest in a standalone office building from possible tenants drove them to drop the office space and put in a hotel.

“The reality was we couldn’t make it work. We tried for nine months to find a user,” deRegt said. “Most of the office users that we talked to wanted to be in a project where they could grow and have multiple phases.”

The prior version of the project included about half the number of below market-rate condos, which would have been dispersed among the market-rate residential buildings. But because that was also too expensive for the developer, deRegt said the project was redesigned to place all those residences in a separate building and more were added to the plan.

Council support was unanimous and several housing advocates praised the project for the large number of affordable condos. But Liccardo still wants the city to revisit some of its urban village rules to ensure the potential for “key high impact opportunity sites” is maximized in the future, even though it “might not be as profitable for the developer.”

The original plans were hailed by the council in 2019 because they addressed one of the main goals of the city’s urban village planning—to foster higher-density housing with significant job growth in select areas of the city.

Two buildings in the middle of the site that currently house a Satellite Healthcare, DaVita Dialysis center and a Round Table Pizza will remain, deRegt said, because it was too costly to relocate them.

The site will also include about 46,000 square feet for a public promenade, which city reports said will include landscaping, accent paving, benches and lounge seating.

Some members of local construction trade unions asked councilmembers to deny the project until the developer commits to using union labor to build the project.

Humberto Nava of the NorCal Carpenters Union said the project will help mitigate the housing crisis.

“But it has to have benefits for the community and not make profits on the backs of working people,” he said. “Developers talk about projects penciling out so they can make lots of money. But how about these working families? It needs to pencil out for them, doesn’t it?”