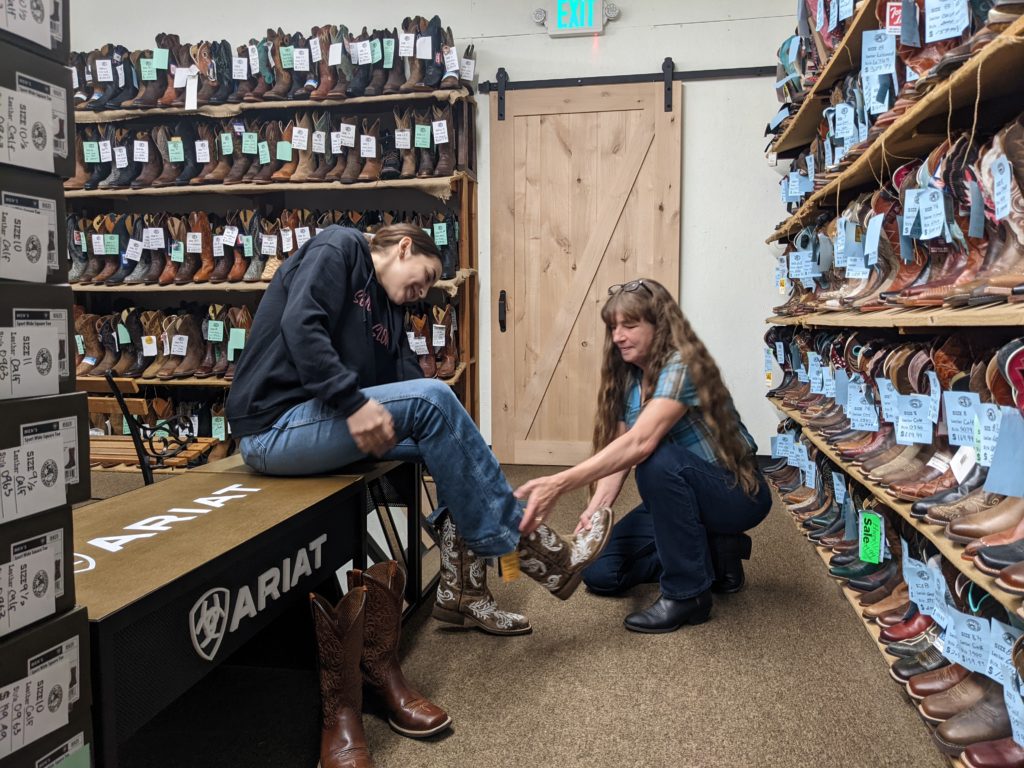 When customers walk through the doors of Winchester Western Wear, they’re hit with a blast from the golden past of California’s ranching era. Framed posters hang above shelves lined with intricately detailed cowboy boots that capture the store’s 40-year history. Crocodile skin boots worth $15,000 rest in a display case, and a working cash register from the 1800s sits behind the counter.

Surrounded by Silicon Valley’s abundance of startups and tech giants, the store seems out of place in San Jose, the country’s 10th largest city. But Cheri Deponte, who co-owns the shop with her husband, Michael, said running a western wear store in San Jose blends right in with her loyal customers.

“Various people have worn (this clothing style) all their lives and they still do,” said Cheri, who worked in the tech industry before taking over the family business. “I have CEOs that wear cowboy boots with their suits.”

Employee Priscilla Torres was part of that loyal base before she started working at the store last August. She used to visit for years with her dad and when she was old enough, applied for a job. Torres grew up in a Mexican vaquero community and helps Cheri with Spanish-speaking customers.

The Biz Beat: San Jose feed store caters to every anteater and zebra

“My favorite part (is) being able to show who I am and what I like, wearing my boots and stuff,” Torres told San José Spotlight.

Cheri’s father opened Winchester Western Wear in 1982. Before setting up a brick and mortar storefront, he traveled cross-country selling cowboy hats and apparel at western fairs.

He was able to open the physical store location when he won big at keno in Las Vegas, Cheri said. Her dad outfitted the store’s first location on Stevens Creek Boulevard, moving several times thereafter before landing at the current Bascom Avenue location in 2019. Each move included a towering orange horse statue, affectionately known to the family as Mr. Ed.

Cheri said she’s worn western wear all of her life. Growing up, she often helped at the family store, which she took over after being laid off. At the same time, her husband suffered a stroke and was laid off from the airline industry. She became the official owner in 2014.

Like most small businesses, Winchester Western Wear was not immune to the effects of COVID-19. Without government assistance and a grant from Facebook, Michael Deponte said the business wouldn’t have survived. The community’s support enabled the family to bounce back from the pandemic.

“We’re like any other person, pretty much (living) paycheck to paycheck,” he said.

Although they have competition from larger outlets, the couple said what makes them stand out is their variety of styles.

“People come from Gilroy or Hollister to get shirts and boots from us because when they go to parties, everybody’s wearing the same thing,” Michael said.

Crocodile boots worth $15,000, now illegal to sell in California, rest in a display case. Photo by Annalise Freimarck.

Nicole Lopez, an employee at the store, said western wear clothing is a staple in her life and one of the reasons she wanted to work at the shop.

What puts them on the map: The variety of cowboy hats and boots