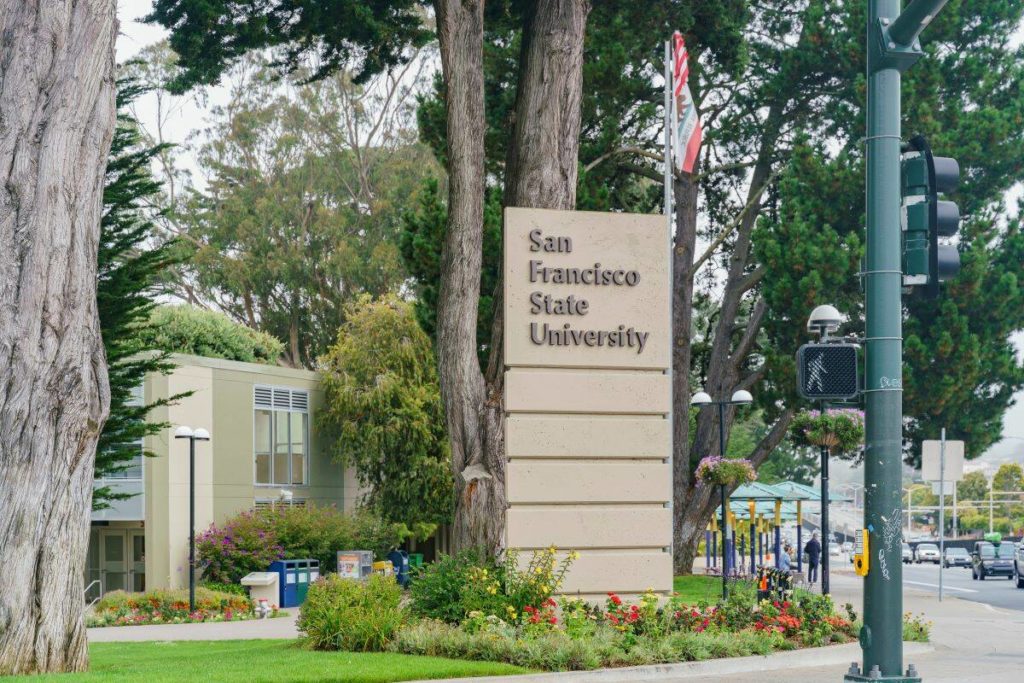 Students at Chico State University are no longer required to mask up indoors in order to prevent COVID-19. But Chico State public health professor Lindsay Briggs still requires students to wear masks in her class out of concern for her immunocompromised wife, who has lung problems.

“I told my students: ‘If you bring COVID into my classroom, and I bring it home, it is likely my wife will die,’ ” Briggs said.

Briggs isn’t alone in her concern. Across California State University, the country’s largest public four-year university system with close to half a million students, campuses are making different choices around COVID-19 protections as the pandemic moves into a new phase. For some immunocompromised students and staff — part of the third of California adults at a higher risk for serious COVID-19 complications and death — that means weighing the risks of attending in-person classes, and feeling neglected by university administration who they say didn’t consult them before easing restrictions.

Each of the system’s 23 campuses implements COVID-19 safety measures based on their communities’ needs, according to the Chancellor’s office. San Francisco State still enforces a mask mandate, as does Cal State LA, where the campus is peppered with signs reminding students and faculty to wear masks indoors. Meanwhile, Chico State and Cal Poly San Luis Obispo removed their mask requirements in spring.

The changes in campuses’ practices coincided with months of declining COVID cases and hospitalizations in the state — though those numbers started ticking up recently. Public health experts said colleges could institute safety measures beyond requiring vaccines to protect immunocompromised students, including socially distanced classrooms, testing after breaks, encouraging mask use and online class options. “I think that masking can play a role in helping to control viral circulation and certainly protecting immunosuppressed people,” said Dr. John Swartzberg, a UC Berkeley infectious diseases professor.

The College Journalism Network talked with immunocompromised students and staff about life during the pandemic, and the uncertainty and frustration they feel as the world seems to be moving on. Their sense of safety, they said, is affected by the precautions taken both on their campuses and in the surrounding communities.

“My life has kind of changed very positively in the last two years,” says Olive Patton, “by everybody wearing masks around me.”

As a child, Patton did gymnastics and dance and dislocated her joints often. She had pneumonia in elementary school and hip surgery in high school. At 16, she had bronchitis multiple times and had to go on steroids, she said.

“So pretty much the combination of having chronic pain and having a weakened immune system, I was pretty much sick at least every other week, pretty much all of my childhood,” Patton said.

Patton wasn’t diagnosed with EDS until she was 19. She is susceptible to the smallest of colds, but hasn’t worried too much about the risk to her health on campus because San Francisco State University still requires students, faculty and staff to wear masks. The city of San Francisco also has an 84.7 percent COVID-19 vaccination rate. That’s compared to 64.5 percent in San Luis Obispo, where Kaplan lives, and 51.4 percent in Butte County, where Duarte lives.

“I think in San Francisco we’ve had a pretty good social climate around masks and distancing, and also, like, being really careful with checking vaccination cards,” Patton said. But leaving the city and seeing people holding large parties or making fun of others for wearing masks has been “a shock,” she said.

San Francisco State chose to keep its mask mandate and other safety measures such as weekly testing for those with vaccine exemptions in part to keep high-risk people and their family members safe, said Pam Su, associate dean of students at the university.

“We know that there are students and faculty who live with people who are immunocompromised, or have children who are not able to get the vaccine yet,” Su said.

Immunocompromised students who still have concerns about their safety can ask their academic department officials if they can take more of their classes online, Su said.

Though Patton’s classes are online, she still goes to campus because she is a fellow at the Paul K. Longmore Institute, an organization that studies and showcases disabled people’s experiences. Mask mandates, she said, remove the burden of asking another person to put on their mask, especially in a larger group.

“It’s also really intimidating to have to be the person to say, ‘I’m uncomfortable, people aren’t wearing masks,’ or, like, having to try to fight that,” Patton said.

Having virtual classes throughout the pandemic made Patton feel safer, and she believes they should have been an option even before the pandemic. They give disabled people a chance to learn in the comfort of their own home without putting themselves in danger, she said.

Although she does feel safe, Patton feels like she is a special case. As a graduate student in a small cohort, she said she has more options. Other students may not have the same flexibility, she said.

“I wish there was some way for other people to understand why it’s so important to take care of one another and to continue practices that keep other people safe,” she said. “It really doesn’t need to be this extremely political statement.”

Mendoza is a fellow with the CalMatters College Journalism Network, a collaboration between CalMatters and student journalists from across California. This story and other higher education coverage are supported by the College Futures Foundation.

M.W. Kaplan was looking at a picture recently of themselves on a bus, but something looked off — Kaplan was wearing a mask, but no one else was.

Then the Cal Poly San Luis Obispo student realized it was a photo from 2019 — before COVID, when most of the world wasn’t worried about catching a deadly virus.

Kaplan has a musculoskeletal pain disorder that causes neurological dysfunction and fatigue. They take a steroid that reduces the pain and inflammation associated with their condition, but also lowers their immunity, making them more susceptible to severe COVID-19 and other diseases.

“Even before the pandemic started, I got sick quite a lot. And especially during flu season, I wore surgical masks even then, especially if I thought I was sick or if I was going to be somewhere crowded where I knew that people were probably going to be sick,” Kaplan said.

Kaplan experiences headaches, sore throat, and nausea on a nearly daily basis. Kaplan calls this their baseline, and thinks COVID would be worse.

“Given how poor my health already is, I know that damage would make a very big, very obvious difference in my day-to-day life,” they said.

A communications major and president of the Cal Poly Disability Alliance club, Kaplan was enrolled in one in-person class for the fall and winter quarters. Being fully vaccinated and on a campus with a mask mandate, they felt just slightly uncomfortable in a classroom full of students. But when Cal Poly SLO announced it was removing the mask mandate in late March, Kaplan worried more about their safety and decided to switch their in-person class to a virtual one. It wasn’t hard to make the change, they said, since they know a lot of their professors in their department.

“They are incredibly accommodating and just generally very kind people,” said Kaplan. “So in that respect, I’ve been very lucky because I know people in a similar situation that have not had professors that were as accommodating.”

Cal Poly SLO’s decision to remove its mask mandate, they said, was “disheartening, but not shocking.”

“The lives of disabled people have never really been anyone’s priority,” they said.

Kaplan said Cal Poly SLO administrators did not consult the Cal Poly Disability Alliance club about removing the mask mandate — even after the campus newspaper, the Mustang News, published a story about the concerns of immunocompromised students.

“Cal Poly’s primary focus has been to do everything in its power to ensure the health and safety of all of its campus community members while also providing its students with a learn by doing experience that is as close to ‘normal’ as possible within current public health constraints,” Lazier said in an email.

For Kaplan, the dropping of the mask mandate illustrated a general lack of awareness about the issues disabled people face.

Healthy people might not think much about someone not wearing a mask, for example, but for Kaplan, it signals that they don’t value Kaplan’s life.

“It’s become really easy to tell who cares and who doesn’t based on whether they wear a mask, and what they say about wearing masks,” they said.

Only 30 percent of Benjamin Duarte’s kidneys are functioning due to chronic kidney disease, and he grapples with diabetes and high blood pressure. These diagnoses made Duarte, an outreach specialist at Chico State’s STEM Connections program, approach his job differently in the last few years.

Duarte, 57, is both at a higher risk for a serious COVID-19 infection and passionate about his job, in which he helps recruit students from low-income and underrepresented communities into science, technology and math majors. He was recently nominated for a campus employee of the year award.

But continuing that work in an environment where he doesn’t feel protected by the university is difficult, he said — so much that he’s considering other career options, or retiring early.

Chico State’s president announced that the university was lifting the mask mandate in early March, citing Butte County’s “sharp decline in cases and hospitalizations” and the campus’ high vaccination rates.

Duarte spends most of the work day in his office wearing an N95 mask with his unmasked coworker. And although he mostly works on campus, he’s still often interacting with people on the phone or computer.

When students or staff ask why he is so strict about masking, he says he tells them, “Because if I get something from you I could die.”

He also gets upset when people compare COVID to the flu, as if that were less serious.

“Yeah, a flu can kill my kidney,” Duarte tells them. “I can’t go through that. If I get the flu, and I get diarrhea, I get dehydrated, that’s seriously taxing my kidneys.”

He has sent repeated emails to Chico State administrators asking them to give better guidance on how to deal with exposure, and has been critical about the way administrators have handled the pandemic since March 2020, questioning if they are qualified to make public health decisions in a crisis.

Sean Murphy, a university spokesperson, said there are at least three public health professionals on Chico State’s emergency’s operations team, including a registered nurse and a physician.

With most of his work done virtually, Duarte feels like he is missing out on a large part of what used to make his job fun: interacting with students.

“I’m tired of being inside,” he said. “I’m a people person; I like being around people and engaging.”

CalMatters is a nonprofit newsroom committed to explaining California politics and policy.