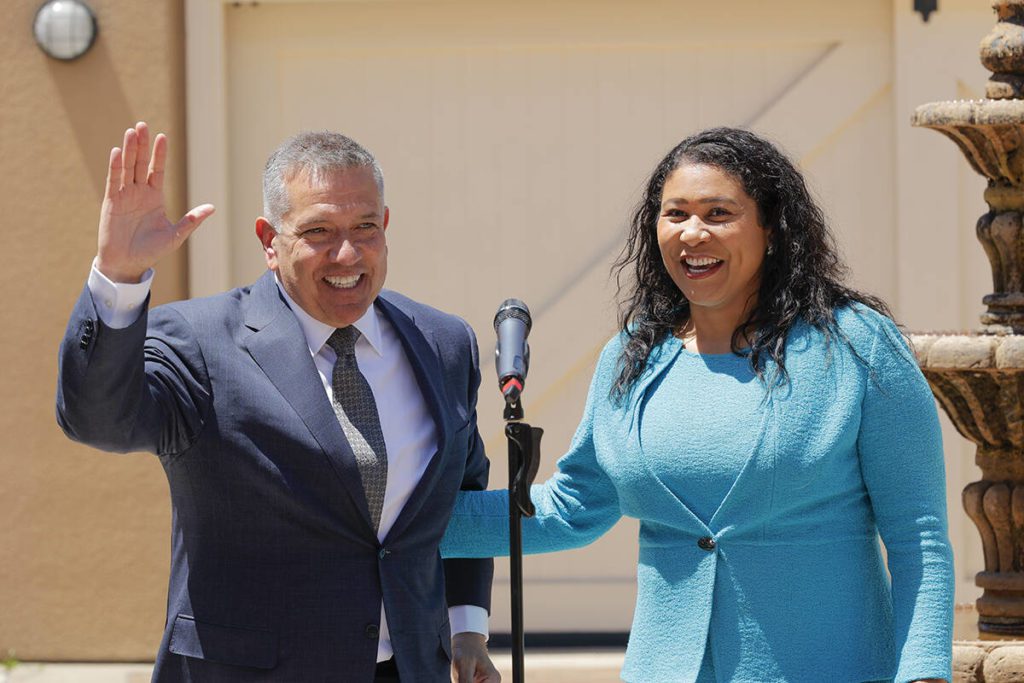 Breed and Dorsey are betting that increased police presence and other visible indicators of public safety are voters’ top priority in District 6, if not across The City. Their focus comes at a time of growing polarization around this issue, illustrated by contentious debates in the Board of Supervisors’ chambers and the high-profile recall election of progressive District Attorney Chesa Boudin next month.

At Dorsey’s swearing-in ceremony Monday in the courtyard of Delancey Street restaurant and drug rehabilitation center, Breed explained the thinking behind her selection while Dorsey provided a preview of his political agenda on the Board of Supervisors.

Breed described her appointment of Dorsey as a “hard decision,” following conversations with residents of “the new District 6.” After a contentious redistricting process, the district now encompasses nearly all of SoMa and Mission Bay, but no longer includes the Tenderloin.

“What I heard time and time again, and why I felt it was necessary to appoint Matt Dorsey to this position, every single person I talked to, for the most part, at the top of their mind was public safety,” Breed said.

Other speakers at the swearing-in also echoed the importance of public safety, including Miriam Zouzounis, owner of Ted’s Market in SoMa and vice president of the S.F. Small Business Commission, and Gloria Lee, head of a SoMa neighborhood group.

During his remarks, Dorsey said drug dealing and associated crimes were his No. 1 focus during his time at the police department.

“I’ll never be a one-issue supervisor or a one-issue candidate,” Dorsey said. “But I’m absolutely convinced of this: If we could prioritize one issue to make real progress on, getting more people with drug addiction into drug treatment and into recovery would make progress on an array of related issues, from retail theft to auto burglary to homicides.” He went on to invoke the “police staffing crisis,” saying the police force is 25% below recommended levels.

In addition to his emphasis on public safety, Dorsey vowed to be a “forceful advocate for the promise of authentically progressive urbanism,” by, among other policies, “ending cynical abuses of local control and environmental review” for housing construction.

Dorsey also discussed his recovery from drug addiction and his experience living as an HIV-positive gay man.

Dorsey’s identity has put The City’s LGBTQ political organizations in a challenging spot, celebrating Dorsey’s appointment while also acknowledging their support for Mahogany, who is a transgender Black woman. In a statement, the Alice B. Toklas LGBTQ Democratic Club commended Breed’s choice of Dorsey, who is white, while also writing that he and Mahogany are “both incredibly qualified LGBTQ candidates.”

In an interview with The Examiner Monday, Mahogany called Breed’s selection of Dorsey a “very political decision” to bring in a supervisor who would “agree with her on everything.”

Mahogany, who, like Dorsey, lives in SoMa, said she’s definitely planning to run in the regularly scheduled November election. In being passed over by the mayor for this appointment, Mahogany said she will have more leeway to pursue a platform of her own come election time. “In some ways this frees me up a bit, so that is a positive.”

Mahogany said her campaign will highlight her four years of experience as an aid to Haney and her work as co-owner of The Stud nightclub.

“I’m very familiar with the challenges that are faced here,” she said. “The top two things they’re most concerned about are getting folks off of the streets and into housing and, of course, also building housing. So those are going to be two of my main focus points.”

Haney, who did not respond to a request for comment, signaled his disappointment with Breed’s decision by writing on Twitter, “I guess we aren’t hanging up our campaign sneakers just yet. Let’s go.”

Others expressed frustration that Breed would reward Dorsey with this position days after a Board of Supervisors’ hearing on SFPD’s strategic communications unit, which Dorsey led. Supervisor Dean Preston, who called the hearing, said at the time he was concerned the unit perpetuated “an orchestrated and constant narrative — on crime, on policing, on public safety — that encourages increased police funding and increased policing,” according to a report by Mission Local.

Dorsey was a central character in the feud between Police Chief Bill Scott and District Attorney Chesa Boudin that erupted during an SFPD officer’s excessive use of force trial, providing the media with extensive dossiers detailing Scott’s side of the story.

“This is a big deal for San Francisco to have someone in recovery from addiction,” Wolf said. “He’s the perfect person for this moment.”