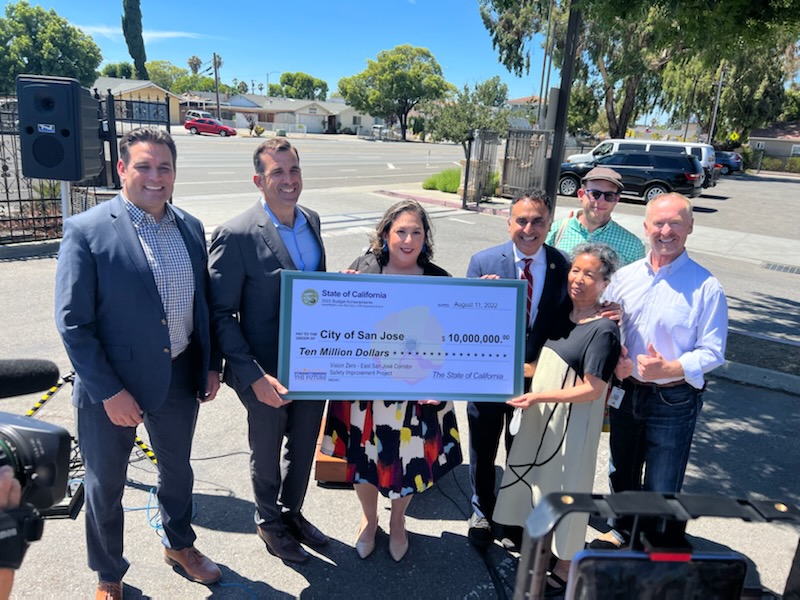 East San Jose streets are on track to becoming safer for drivers, pedestrians and cyclists alike.

Assemblymember Ash Kalra handed a $10 million check to San Jose leaders today for the installation of more street lights, bike lanes and other protective measures around Senter Road. The state funding qualifies the city to compete for additional grants. The 4.7-mile stretch from Monterey Road to Story Road ranks sixth in traffic accidents, with more than 570 accidents since 2016. Eight people have been killed in this time period and more than 40 seriously injured on Senter Road.

“(These funds are) going to make these much-needed improvements from Rock Springs to Seven Trees,” said Councilmember Maya Esparza, who represents the area. She said for years residents have been asking for more street lights, better signals and additional protections for bike lanes.

San Jose received $11 million from the state for fiscal year 2022-23 and $10 million is going specifically to transform Senter Road. The funding will add concrete medians and partitions for bike lanes, enhance crosswalks with flashing beacons and upgrade street lights. It also includes a new traffic light at Senter Road and Balfour Drive, and new signs and additional radar speed signs on other streets. Kalra, who represents part of the city’s east side, secured the dollars.

Data analyzed by San José Spotlight found East San Jose roads accounted for more than 70% of all traffic-related deaths last year. District 7 had the most fatalities with 16. The deaths occurred along Monterey and Story roads, McLaughlin Avenue, Capitol Expressway and Tully and Senter roads.

Daniela Castañeda, a transit advocate with the Silicon Valley Bicycle Coalition, said this is a big win for East San Jose—especially because it harbors some of the most dangerous roads and highest numbers of traffic-related accidents, injuries and deaths. She credits these dangerous roads to a historic lack of investment in East San Jose.

“Eastside residents deserve to have safe streets,” Castañeda told San José Spotlight. “These are not just bicycle projects, these are safety projects. When bicycle lanes are installed, they also protect people who walk and ultimately help keep the whole community safe.”

Senter Road is the first major safety corridor redesign project in San Jose prioritized through the city’s 2020 Vision Zero Action Plan. San Jose adopted the Vision Zero initiative in 2015 to analyze traffic data and develop safety programs after 60 traffic fatalities occurred that year. In 2018, the city identified 17 of its most dangerous corridors—seven of the streets run through District 7 including Senter Road.

The city has funded temporary, quick-build infrastructure solutions to make streets safer. On Senter Road, the city spent under $1 million to paint the intersections and put green balls and plastic barriers in place to force drivers to slow down. These efforts saw traffic death and serious injuries along Senter Road drop from 15 in 2020 to five in 2021, according to city data.

Now with the $10 million, the city can start building long-term infrastructure. The total cost to transform Senter Road is $30 million and the city is applying for the federal Safe Streets for America grant for up to $50 million. The city cannot break ground on improvement projects until all the funding is secure. Once it does, the city will release a timeline for the build out.

Cora Tomalinas, a Seven Trees neighborhood resident and local advocate, said this funding is an ode to the family members who lost loved ones on Senter Road.

“I would like to say thank you to the families of those people that perished on the street,” Tomalinas said. “Your loved ones were not forgotten.”