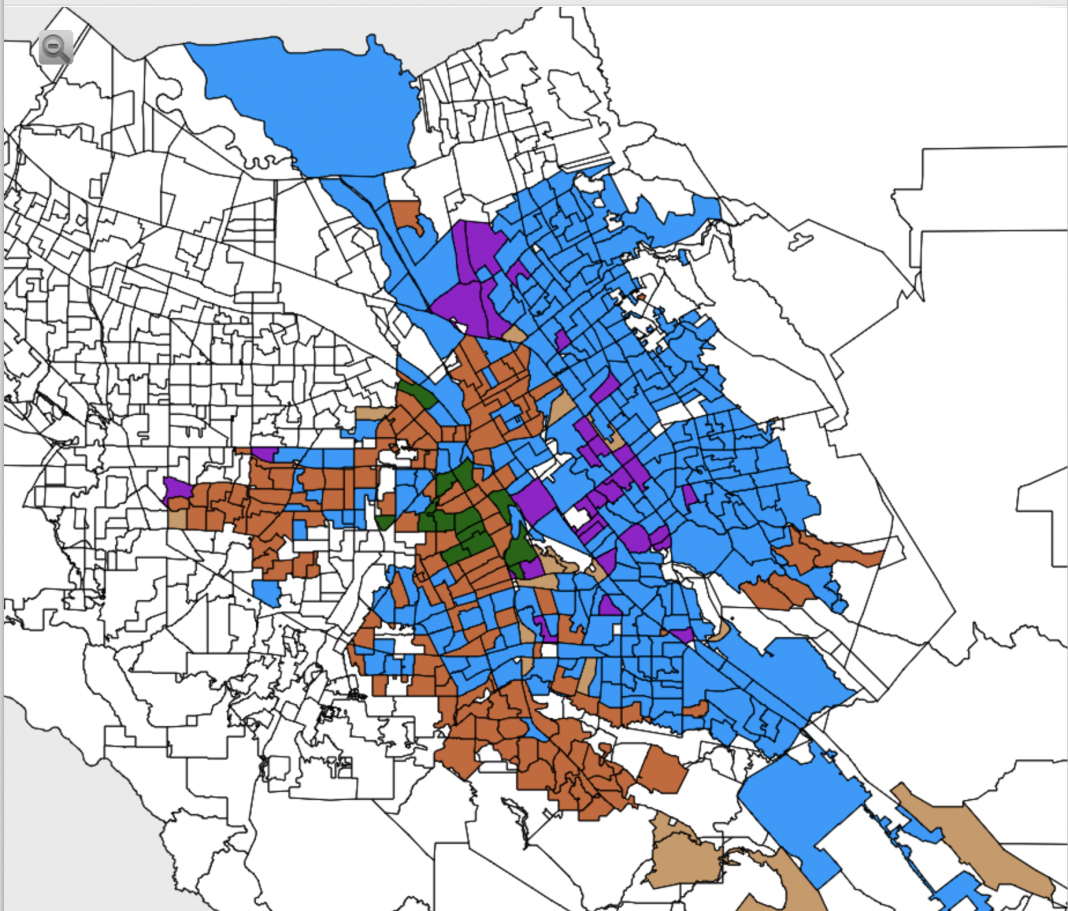 Eight years ago, progressive San Jose mayoral candidate Dave Cortese lost his bid to the business-backed Sam Liccardo, despite an overwhelming win in the primary election with support from East San Jose.

Liccardo pulled ahead of Cortese, now a state senator, in November 2014 to become the city’s 65th mayor. His narrow win was secured by a resounding victory in West San Jose, a more affluent area of the city. Liccardo, who terms out this year, won the mayor’s race by just 2,750 votes.

The election further solidified the deeply-entrenched division between the East and West sides of San Jose—pitting the city’s richer, mostly white voters against communities of color in less affluent neighborhoods. The stark division in the city—sliced in half by Highway 101—helped elevate more moderate candidates such as former Mayor Chuck Reed and Liccardo into the top position, local political observers said.

For the last 16 years, those candidates have emerged victorious due to strong turnout on the West Side and a lackluster response on the East Side.

But the tide may be turning as a progressive, union-backed candidate has managed to cut into that more conservative base and flip neighborhoods in West San Jose that Cortese lost in 2014.

Santa Clara County Supervisor Cindy Chavez, a labor politician for more than two decades, is succeeding where past progressives failed. She’ll face off in November against San Jose Councilmember Matt Mahan, a moderate newcomer with a tech and business background, to replace Liccardo.

A data analysis by San José Spotlight found Chavez swept areas traditionally won by conservative candidates, such as South Willow Glen in District 6 and Stevens Creek in District 1. She also gained the majority of support in downtown San Jose, where Liccardo won handily in 2014.

Chavez, a close Cortese ally who helped run his 2014 mayoral campaign, already had a strong base in East San Jose ahead of the June primary. But lessons learned from Cortese’s crushing defeat may help Chavez continue breaking the rigid East-West divide.

Chavez dominated nine out of 10 San Jose council districts in June, earning 65,501 total votes. But most notably, she gained the support of a number of West Side neighborhoods in Districts 1, 6 and downtown San Jose—all areas Cortese lost in 2014—on top of her loyal base in East San Jose.

Chavez said she prevailed in districts her progressive counterparts lost because she doesn’t view the city as two disparate entities.

“One of the most important outcomes of this election could finally be breaking the mold of business versus labor, and this East Side versus West Side,” Chavez told San José Spotlight, adding she doesn’t want to be labeled as a progressive or business candidate. “It’s holding San Jose back dramatically.”

The approach is changing San Jose’s historical voting patterns and putting Chavez in a much more advantageous position than Cortese eight years ago, analysts say.

“There still will be an East Side-West Side division,” Terry Christensen, a political observer and San Jose State University political science professor emeritus, told San José Spotlight. Christensen has studied the East-West division in San Jose for years. “But what we saw in the primary is (Chavez) made significant gains compared to Cortese on the West Side.”

Political insiders have long known mayoral candidates can’t rely on East San Jose alone to win elections because of low voter turnout. In the June primary, the turnout for East San Jose districts ranged from 26.32% to 30.84%—compared to a turnout rate ranging from 35.78% to 40.9% in West Side districts.

“The turnout was dismal in this election,” said former San Jose Mayor Ron Gonzales, the last progressive mayor who served for eight years until 2006. “Voter turnout will be the key factor this election, especially for Chavez, because the districts that she won pretty convincingly in June are also ones with lower voter turnout.”

Adrian Rafizadeh, Mahan’s campaign manager, said the San Jose councilmember will win voters who want a new direction for San Jose. He would not comment on Mahan losing ground to Chavez in what are historically stronghold districts.

“Voters who think we are headed in the right direction on crime, homelessness, housing, and who agree with Chavez that top bureaucrats deserved a bonus while families were figuring out how to pay their bills, will most likely support the supervisor,” he told San José Spotlight. “Voters who want a new direction are most likely to support Matt Mahan, who is offering a concrete plan for common sense change.”

Despite Chavez breaking the geographic divide and securing West Side support, she’ll still need her base in East San Jose to show up to the polls.

Longtime East Side leaders such as Blanca Alvarado, the first Latina elected to the San Jose City Council and Santa Clara County Board of Supervisors, said progressive candidates have long been haunted by persistent low voter turnout in the city’s east side. Alvarado spent decades advocating for equity and has led dozens of social justice and human rights campaigns for the area.

Grassroots organizations and nonprofits have worked for years to boost East Side voter turnout, with mixed results. A big part of the problem, Alvarado says, is voter turnover.

“We have people (in East San Jose) who love their politics and who love to vote, but we have so many people who are transient,” she told San José Spotlight. “We have people moving in and out of that area all the time.”

She said some residents fled East San Jose during the pandemic due to the cost of living. “Unless the younger generation steps up to the plate, we’ll continue to lag behind other districts,” she added.

Christensen predicts the voter turnout in November will be approximately 50% — much higher than the 33.5% from the June primary election.

“That can also help Chavez,” he said. “But the ultimate winner is going to be the one who reaches into the other side.”

Despite Chavez’s breakthrough in the primary, political experts said the election is still up for grabs.

Christensen said the winner needs to shore up their base and secure massive campaign funding. Chavez has some big names—including San Francisco 49ers football team executives, longtime business leader Carl Guardino and the South Bay Labor Council—behind her. Mahan is enjoying support from the newly-formed PAC Common Good Silicon Valley led by Liccardo’s chief of staff Jim Reed, which is doling out big bucks to support him.

In total, PACs spent nearly $1.2 million supporting Chavez in the June election. Mahan received about $360,000 from the Common Good Silicon Valley PAC. Since last December, Chavez has raised $916,000, and Mahan has raised roughly $900,000.

“There’s still a race,” Christensen said. “Mahan had a bigger hill to climb to get his name out there and he did a really good job of it in a very competitive election in June.”

Former mayor Gonzales said it’ll also depend on who pulls votes from the defeated mayoral candidates in June, such as Councilmembers Dev Davis and Raul Peralez.

“The question is how does Mahan or Chavez get these votes?” he said. “A lot of time people assume, but it’s not that easy.”

In the 2014 matchup between Liccardo and Cortese, Liccardo snagged support that went to moderate candidates such as Madison Nguyen and Pierlugi Oliverio.

“The outcomes in a primary race are instructive,” Gonzales said, “but they’re not final.”