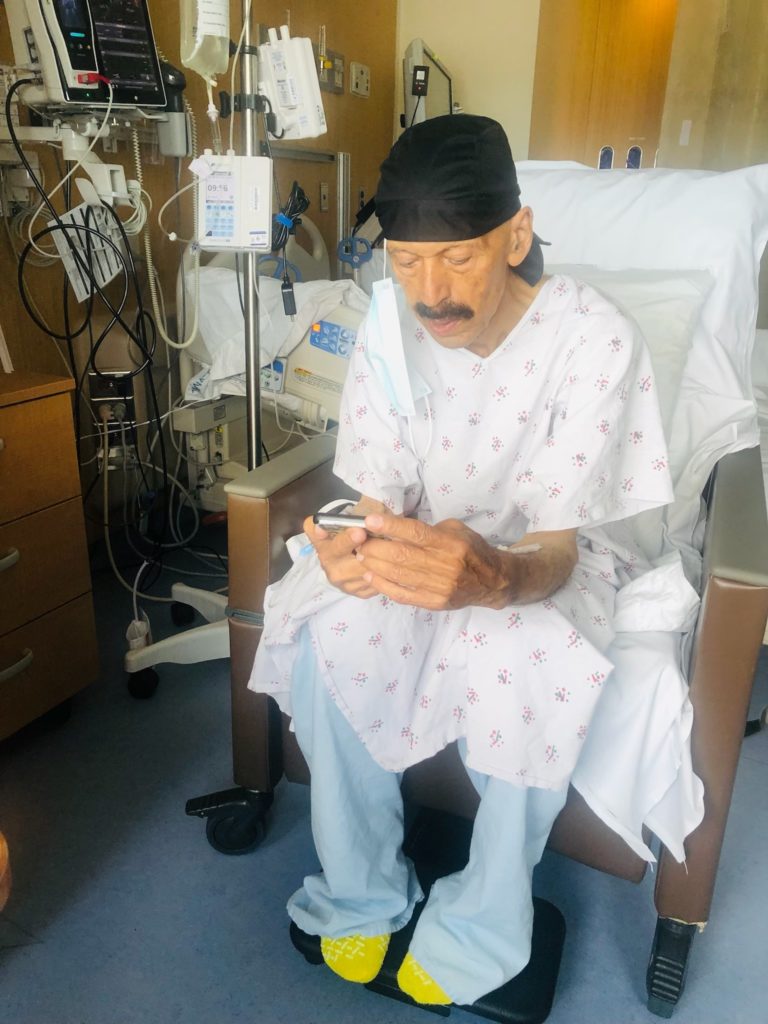 Juan Quintero was on the verge of death.

After learning he had terminal liver cancer in March, Quintero ended up at Santa Clara Valley Medical Center (VMC) for treatment.

Instead of getting help, Quintero waited 14 hours in an ER lobby. He waited more than a week later for an biopsy and seven weeks more for test results to qualify him for chemotherapy treatment. His daughter, Ana Mendoza, watched her 75-year-old father’s health decline rapidly. Quintero stopped eating and he could barely speak.

“It was killing us to see my dad’s health going downhill because the hospital didn’t have enough staff and equipment,” Mendoza told San José Spotlight. “He was ready to give up. I almost gave up too. It was hard.”

Juan Quintero thought he would die before getting treatment from VMC. Photo courtesy of Ana Mendoza.

Physicians and technologists at VMC are sounding the alarm over ongoing worker shortages and decrepit equipment in the radiology department. Workers said the years-long issue is made worse by the COVID-19 pandemic, resulting in a backlog of hundreds of patients and months-long waits for basic, non-invasive scanning such as MRIs and CTs. The problem is dire in many cases. Technologists in the department are doing the job of two or three people, workers said.

Santa Clara Valley Medical Center, one of three public hospitals operated by the county, serves some of the most vulnerable and low-income residents, many of whom don’t have private insurance or options for health care elsewhere, workers said.

“Being one of the most vulnerable populations, many of our patients don’t have the resources to pay for their health care,” a technologist with more than 10 years of experience at VMC told San José Spotlight. “Many of them wait until they can’t wait any longer, and the progress of their disease is so much further along than patients with resources and options.”

San José Spotlight is not naming VMC workers due to their fear of retaliation. This news organization talked to seven doctors and technologists who shared corroborating stories.

Hospital administration refuted the claims from workers, but didn’t provide any additional information.

County executive Jeff Smith did not respond to requests for comment.

“We do take all concerns seriously and are working collaboratively with our staff to address them,” VMC CEO Paul Lorenz told San José Spotlight, adding services have been hit by the pandemic. “Our staff are doing an excellent job caring for our patients, and our patients should know that their care, including access to both urgent and routine imaging services, is prioritized to meet their medical needs.”

VMC is the anchor facility—and safety net—for the county health system with 730 beds. As one of the few level 1 trauma centers in Northern California, the hospital provides comprehensive care for every aspect of injuries, from prevention through rehabilitation.

Radiology services, including MRIs, X-rays and CT scans, are required by nearly every single patient at the hospital, a VMC radiology doctor told San José Spotlight. The services are crucial in diagnosing and monitoring diseases such as cancer. Many procedures—like hip replacements—also require radiology technologists and equipment.

“The breadth of radiology is quite big, and the involvement of our services throughout the hospital is pretty substantial,” said a doctor who’s worked at VMC for several years.

That means when machines or workers are not available, life-saving procedures and diagnoses get delayed, potentially complicating a patient’s medical plan. It’s impossible to quantify how many patients have slipped through the cracks because of the issues in the department, doctors and technologists said. What’s evident is the broken system.

Wait time for scans has ballooned. As of June, the wait for an MRI scan is at least three to four months, doctors told San José Spotlight. Patients are waiting six weeks for an ultrasound, and four weeks for a breast MRI.

Patient often wait an average of two hours on the phone to schedule an appointment, radiologists said. Out of 3,399 calls in June to the department, only 1,526—or 45%—got picked up. Workers said the county has not hired enough people to take those calls and finish clerical tasks.

Doctors and technologists said the machines at VMC are so outdated, the manufacturers stopped making parts for them, further delaying repairs. Photo courtesy of VMC workers.

The issue is exacerbated when equipment breaks down. The hospital has multiple machines that are beyond repair. Doctors and technologists said the machines at VMC are so outdated, the manufacturers stopped making parts for them, further delaying repairs. A technologist said eight people are doing the job of 16 people this week. Because of the shortage, appointments and procedures sometimes get canceled on the scheduled day.

Some doctors said they are still waiting for certain machines budgeted at least six years ago. A technologist said many of the machines at VMC are more than 23 years old. The lifespan of an X-ray machine is between 10-15 years.

VMC relies on three CT scanners—one of which is permanently inoperable and another one routinely breaks down, sources said. When the scanners are down, patients have no choice but to wait for another appointment.

“If our patients were affluent clientele who know how to work a system like you’d see at Stanford or El Camino, they wouldn’t put up with this sort of stuff,” the doctor told San José Spotlight.

Physicians said the culture at work also impedes their ability to provide quality care. Administrators make many decisions on staffing and equipment without consulting them, they said. Many said workers have not spoken out about the issues in the department because of fear of retaliation.

Valley Physician Group, a union representing VMC doctors, sent the hospital administration a letter last November detailing the issues. SEIU Local 521, a union representing technologists and other workers in the radiology department, also sent a petition signed by 95% of the workers with similar concerns to the Board of Supervisors in February. The efforts have yielded no response.

Hospital administrators have hired more workers since, but little else has been done, workers said.

“They couldn’t care less about us being frustrated,” a doctor said.

The concerns from VMC doctors and workers come as Santa Clara County has vowed to invest in health care. The county spent roughly 40% of its next year’s budget on hospitals and health programs. But VMC workers said administrators are ignoring glaring issues in the hospital. Valley Physician Group is negotiating the doctors’ contract, who have been working without one for at least 18 months. Physicians employed by the county claim they’re being underpaid and overworked compared to their peers in the region.

The complaints come on the heels of one county doctor who died by suicide in May and another attempting suicide this week.

Radiology is not the only VMC department experiencing significant problems. Earlier this year, a group of contracted emergency physicians protested against the ongoing staff shortages and unsafe working conditions. The doctors, employed by medical group US Acute Care Solutions (USACS), wanted the county to either hire them as county employees or find a local company to manage them. Santa Clara County decided to extend the contract with USACS despite the opposition.

Mendoza, the daughter of Quintero and a medical assistant at Kaiser with 17 years of experience, wanted to bring him to Stanford Cancer Center or Kaiser. Quintero couldn’t afford it. He had Medicare, but not Part B coverage that covers hospitalizations and doctors.

Quintero stayed in the hospital for several days and was sent home with Tylenol. Mendoza spent the following days calling the hospital to schedule her dad’s biopsy, which was crucial to assess his illness. Once the procedure was done a week later, the waiting game began.

“They said the result will come within 10 days to two weeks — that didn’t happen,” Mendoza told San José Spotlight. “I spent like at least seven hours in the following days trying to get an answer, and nobody could help me.”

“From first day at the ER to the first chemo, it was hell,” Mendoza said. “I understand there’s a system, but why so long? Why?”

Things have improved for Quintero since. He finished his fourth round of chemo this week, with little side effects, Mendoza said. His family is rejoicing, but the experience left a bad taste with Mendoza. She is planning to file a formal complaint about their experience.

“I feel like the county is saying, ‘If you’re low income, you don’t deserve more than this,’” she said. “It’s as if we don’t matter.”