Masks, testing on the way as San Francisco schools struggle to stay staffed 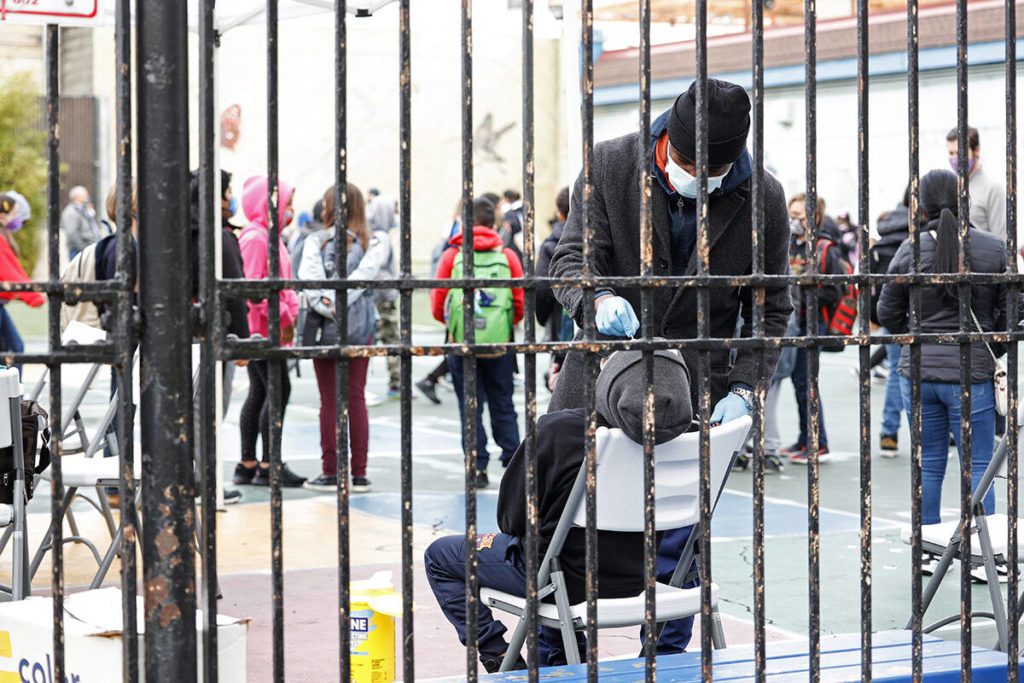 The omicron wave is expected to continue for several more weeks, but, for now, here’s where things stand at our public schools and what’s being done.

How many staff and students tested positive for COVID-19 or are out of school?

Since school resumed on Jan. 3, more than 2,180 out of nearly 63,000 staff and students at San Francisco Unified School District have self-reported positive cases. For the entire fall semester, there were 647 reported cases total. There was some good news. Through tests conducted by the district’s testing provider, Color, there was a 7.2% positive test rate last week. That’s down compared with 9.3% the previous week and 8.6% the first week of returning to school. SFUSD’s testing dashboard only includes cases linked to exposures at schools, said spokesperson Laura Dudnick. It’s still unclear if results from rapid testing are accounted for.

The district counted 362 teacher vacancies on Tuesday, down from more than 400 nearly every day last week. Up to 200 substitutes and up to 100 certificated and classified central office staff have been deployed to classrooms daily. SFUSD has made several calls for prospective substitutes.

Attendance was estimated at 83% for the first week of the spring semester, down from about 94% the same week for the past two years. At about 80% attendance, fewer elementary students showed up than their counterparts in middle school, at nearly 86% attendance, and high school, with 85% attending.

About 70% of African American students and nearly 61% of Pacific Islander students attended the first week. Students in Bayview-Hunters Point and Treasure Island attended at some of the lowest rates, 75% and 72%, respectively.

What happens when students stay home?

Students under quarantine may enroll in the district’s limited independent online learning programs for up to 15 school days. Premade assignments are available but making work specific to the student’s class has been an additional challenge for strained educators, many of whom may be filling in other classrooms during their prep periods.

Agnes Liang, the school board’s student delegate and a Mission High student, shared a recent board meeting that she tested positive for COVID and is lacking support while isolating at home.

“It makes me very angry to be in this position right now,” said Liang. “There is no hybrid option. Across the board, everyone is frustrated and very confused.”

A handful of parents, teachers and students in San Francisco have called for a two-week pause on in-person learning. District officials are focusing efforts around obtaining and deploying supplies to limit spread and are not considering a switch to remote learning, which would come with the loss of state funding.

But keeping schools running is the primary challenge. A staffing vacancy crisis that began in the fall deepened, with all credentialed staff — including Superintendent Vincent Matthews and Board President Gabriela López — deployed to classrooms in need, and some classrooms combined. At one point, Mission High School had 44 classrooms without certificated staff, said school board member Mark Sanchez.

More than 600 educators were out sick Jan. 13, with an unknown number of teachers participating in a sickout. Teachers in Oakland held multiple sickouts and students threatened a boycott unless more precautions were made.

“My feeling is if schools shut down it’s because we can’t staff them,” Sanchez said.

What supplies are available or on the way?

Leading up to the end of winter break, staff and students scrambled to find tests as demand skyrocketed. The district partnered with Safer Together to offer rapid antigen testing, in addition to preexisting PCR testing through Color’s sites and self-swab kits sent to a lab. Safer Together was intended for the first week of school but has been expanded to the rest of the month and the district is pursuing the option through the end of the school year.

However, due to the stark demand for testing across the board, results are backed up and may come a few days later. Officials expect the window to shorten as the omicron wave peaks in the next few weeks.

The state has also provided one rapid test per student, amounting to 56,000 for SFUSD now being distributed. While other districts supplied students with rapid tests over break, SFUSD directed families to testing sites operated by The City or their insurance providers until mobile rapid testing began the day before school returned. By the time the district received notice of a state option for rapid tests, the supply ran out, officials said.

Matthews said the district has enough masks for adults through March; and up to another 500,000 are needed for the remainder of the year.

SFUSD has budgeted $26.7 million so far for testing, contact tracing, protective equipment, ventilation and independent study. District officials are seeking $12.3 million from federal emergency authorities, which will reimburse some costs.

What are staff and student demands?

In addition to accessible testing and masks, students have raised concerns over unexcused absences for being out of school linked to COVID and accountability for classmates who don’t adhere to proper mask-wearing. Student delegates are seeking a hybrid option for those sick at home. Students may be excused if they have COVID or are under quarantine and the district said instructions on wearing masks would be included in posters and communications for better participation.

The district and labor unions, including United Educators of San Francisco, reached an agreement last week. It grants union requests to guarantee N95, KN95 or KF94 masks for all staff and students, weekly testing at every district site and school for staff and students who request it, and 10 days of extended sick leave for staff who test positive or have symptoms. It would last through July 31.

What is the plan moving forward?

A contact tracing contractor has stepped in to relieve some duties of school staff, and supplies are on the way to the district and school sites. López said a long-term plan is needed to be prepared for surges moving forward, which she plans to help implement. This includes a steady supply of masks and testing, rather than from one-time emergency sources.

“Everyone is on board with what is necessary to keep our schools open and keep everyone safe,” López said. “Our constraint sometimes is that the supplies don’t exist, at the state level, at the city level, at the federal level. One-time tests again is not what we need.”

COVID-19 testing times and locations can be found here and families can register for appointments here. Testing options citywide are listed on sf.gov.

Editor’s note: This story was originally published on Jan. 13, but it has been updated with current numbers and developments.