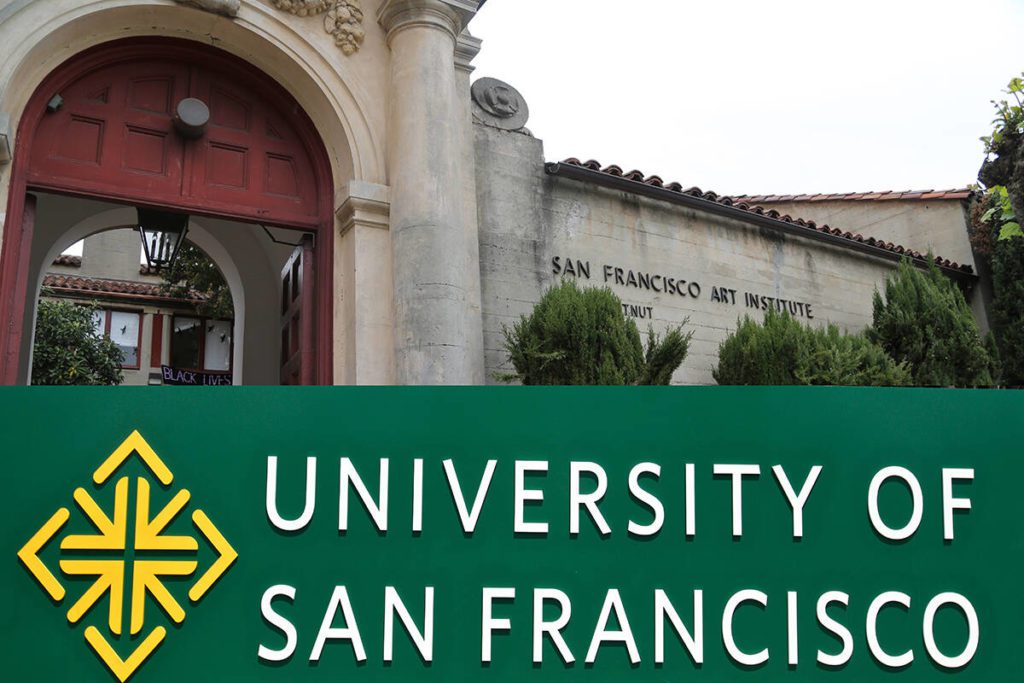 The University of San Francisco and the San Francisco Art Institute, two prestigious Bay Area institutions of higher education, said Wednesday they have signed a letter of intent to explore the possible integration of their operations and academic programs.

Approved by trustees from both sides, the agreement calls for a period of due diligence that would ultimately lead to USF acquiring the Art Institute’s undergraduate and graduate art programs as well as the latter’s historical buildings, art and film collections and other assets. The financial terms of the proposed deal have not been disclosed.

If successful, the newly established program will be known as the San Francisco Art Institute at the University of San Francisco. Throughout the past decade, the two institutions have discussed possibly integrating and, at times, faculty members collaborated on exhibitions, programs and initiatives in and out of the classroom.

Julia Chinyere Oparah, the USF provost and vice president of academic affairs, said, “Arts education is foundational to the creative, rigorous mindset our students need to create a more just and sustainable world. We look forward to bringing the USF and SFAI faculty together to explore a transformed and expanded vision for the arts.

“The vision for SFAI@USF will be the product of close collaboration and open dialogue about how to bring together the arts and social justice in impactful ways that benefit our students, promote cultural equity and support artistic experimentation locally and globally,” she added.

Both institutions are seamlessly woven into The City’s fabric. USF, which enrolls more than 10,000 students, was established as San Francisco’s first university, while SFAI is among the nation’s oldest and most well-regarded contemporary art schools. However the institute has been in financial free fall due to a lack of endowments, high real estate costs and a reliance on income from campus rental properties, which was worsened by the COVID-19 pandemic.

With a letter of intent in place, USF and the SFAI agree to a merger that would recognize the history of both programs while simultaneously creating opportunities for future artists under a combined entity. The period of due diligence will be used to review and assess finances, the physical assets at the Art Institute’s Chestnut Street campus on Russian Hill, the process of academic accreditation for the program and other matters, such as student employment.

In a statement, SFAI Board of Trustees Chair Lonnie Graham said, “We were foremost impressed by USF’s profound commitment to social justice and especially by its deep understanding of the power of the arts to be a significant pillar of change in the world.

“USF has shown the depth of its commitment to be a major force for change in legal systems, social programs, education and technology. This union would create an innovative confluence of the arts and academics to advance a curriculum that reinforces the value of the arts in changing the world,” Graham added.

Current Art Institute students who complete degree programs at USF would receive the same academic and co-curricular services as USF students. Both sides anticipate the review will be completed by the summer so that integrated operations may begin in the fall. Additionally, USF and SFAI faculty will collaborate on curricular redesign and development to ensure the program reflects the academic vision and mission of both institutions.

Jeff Gunderson, a long-time SFAI librarian and archivist said, “The arts education offered by SFAI will certainly be reinforced by the reach of USF while the University of San Francisco will undoubtedly flourish with the creation of a larger footprint in The City—while expanding its educational range by embracing SFAI’s progressive art environment.”

“I truly believe that both colleges will gain greatly from this perfect match and that it will also be a big benefit for SF,” said Gunderson.

Once the financial review has been completed, the letter of intent calls for USF to assume control of the Art Institute’s property and assets on Chestnut Street, which include the Anne Bremer Memorial Library, the Diego Rivera Gallery and the artist’s famous mural, “The Making of a Fresco Showing the Building of a City,” professional exhibition space, extensive film labs and studios and a rooftop amphitheater.