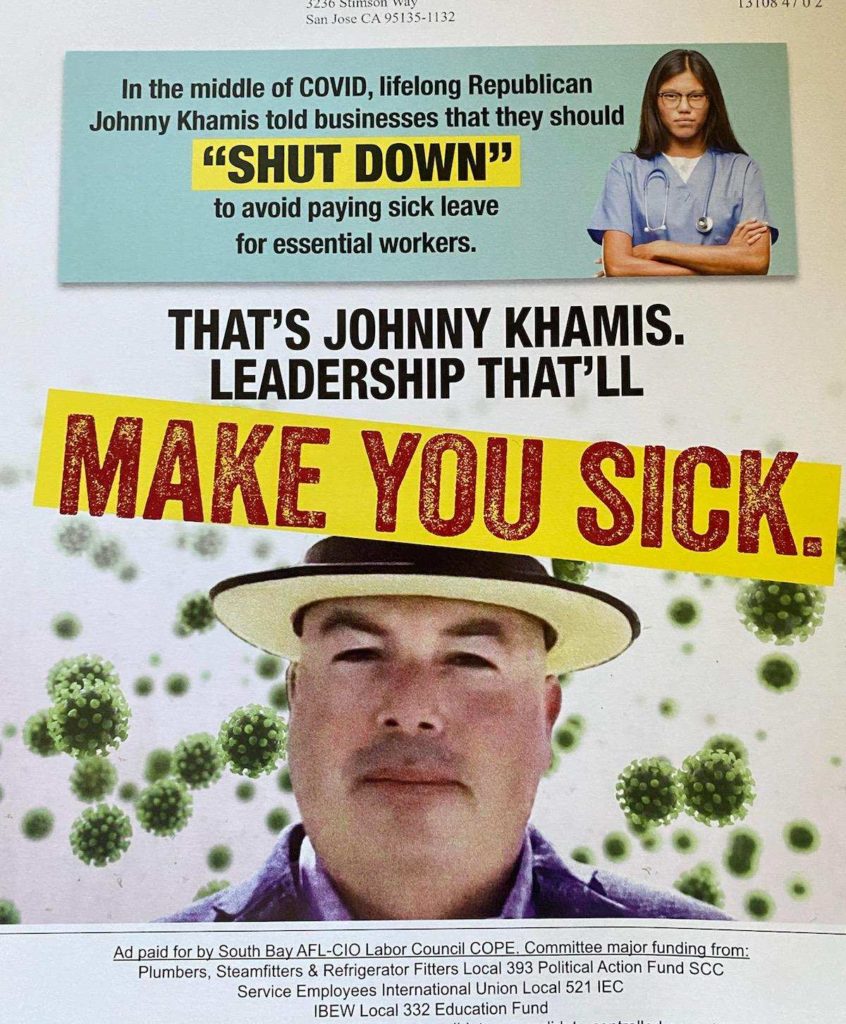 As Silicon Valley inches closer to the June 7 primary election, an onslaught of negative political ads are popping up in voters’ mailboxes, forcing candidates to dispute these smear tactics.

Candidates in San Jose and Santa Clara County races have spent big bucks to get their names in front of voters. These efforts has been met recently with a slew of defaming mailers—many of them paid for by labor union groups designed to turn voters away from targeted candidates. This is not the first time elections in Silicon Valley have become ugly. Negative ads utilizing racist tactics such as darkening Latino candidates’ faces appeared in previous elections, as well.

Johnny Khamis, who is running for Santa Clara County Supervisor in District 1,  is among a number of candidates targeted this primary season. The mailers claim the former San Jose councilmember was a “lifelong Republican” who often sided with landlords and developers while voting against affordable housing, higher minimum wages, rent freezes and sick leave during the pandemic. Khamis refutes all these claims.

He said the negative mailers—some of which feature distorted photos of him in a boxing ring or surrounded by COVID-19 viruses—are “over the top.”

“It is so unethical and so false,” Khamis told San José Spotlight. “They really do a lot of photoshopping to make me look more sinister, like I’m the Joker out of a movie.”

Khamis said he registered as a Democrat when he was between 18 and 29 and is currently an independent candidate.

Khamis said he voted no on a San Jose $450 million affordable housing bond in 2018 because Santa Clara County just passed a historic $950 million housing bond a year prior. During the COVID-19 pandemic, Khamis voted no on the rent freeze plan along with three other councilmembers, citing concerns for mom-and-pop landlords. But he joined in voting yes with the rest of the council on the eviction ban.

After raising concerns that a proposed policy didn’t include an exemption for small businesses with fewer than 50 employees, Khamis voted yes—twice—on a plan that required emergency paid sick leave for essential workers. In March 2020, Khamis said, “After this regulation, we might not have any (small businesses) because it would be easier to not comply with this and shut down because they’re not making that much money anyway.”

The former councilmember said one of the mailers took what he said out of context to claim Khamis encouraged businesses to “shut down” to avoid paid sick leave.

“I just find it distasteful,” Khamis said, adding his campaign has spent roughly $13,000 on mailers to dispute disinformation.

The labor unions defended the mailers, adding Khamis’ voting record speaks for itself.

“Johnny Khamis has a record of voting against the interest of working people and the health of our communities, all of which is well documented,” Jean Cohen, executive officer of the South Bay Labor Council, told San José Spotlight. “Our mail pieces each cite specific votes where Khamis attempted to do the bidding of corporate special interests and in the process harm working families and especially renters.”

Labor groups are out in force

“These pieces are so amateur and have little value,” Bonilla told San José Spotlight. “All of it was outrageous and outlandish because none of it is factual.”

The mailers are also paid for by the South Bay AFL-CIO Labor Council COPE and SEIU. The PAC has spent roughly $27,000 in ads opposing Bonilla’s campaign.

“The ads cite court documents filed by Bonilla’s ex-wife, including a handwritten complaint to police describing how she ‘would see what domestic violence was,’” Cohen said, adding all claims are truthful. “This complaint and other documents noting Bonilla’s failure to pay child support, and losing his real estate license twice because of it, are public documents.”

Mahan was also attacked in a mailer sent out this week claiming he has ties with “anti-choice Republican organizations” such as the pro-life Susan B. Anthony List, conservative group Heritage Action for America and the Silicon Valley Association of Republican Women.

In 2015, Mahan served as the CEO of the now-defunct voter engagement app Brigade, which was launched with the support of 12 progressive and conservative organizations, according to news reports. He recently won the endorsement of the Silicon Valley Association of Republican Women, with members who reportedly supported Donald Trump’s presidency in 2016, according to news reports.

The mailer also suggests Mahan doesn’t support reproductive health care such as abortions after he said the city has no control over health care policies at a mayoral candidate forum.

“I am a lifelong Democrat who is not afraid to bring people together to solve problems,” Mahan told San José Spotlight. “I am now being attacked by an outside interest group trying to defend business as usual at City Hall—including the toxic partisanship that is used to distract voters away from the city’s and county’s failure.”

The mailer—and a website—was paid for by the United Food and Commercial Workers Independent Expenditure PAC. It’s not immediately clear who is behind the PAC—or whether it is allowed to send out such mailers—as the committee is not registered with the city as required.

Candidates are riled up

In District 7, two challengers are attacking each other’s record—starting with San Jose Fire Capt. Bien Doan claiming that East Side Union High School District boardmember Van Le voted to defund police in 2020 on one of his mailers sent out last week.

Le told San José Spotlight the school board doesn’t fund the San Jose Police Department. She voted to end the contract because students were not on campuses due to the pandemic.

“At the time, we also had a budget crisis, so we had to make the right decision,” Le said, adding the district is exploring a different security model.

Doan said her vote to remove police from campuses “shows an alarming lack of good judgement.”

Le’s campaign is refuting Doan’s ads by sending out a rebuttal mailer in Vietnamese, pointing out Doan has never been elected to office, lost the endorsement of his firefighter union to the incumbent Esparza and is backed by former Councilmember Tam Nguyen—who misled voters with unauthorized quotes in his 2018 reelection campaign and was later disbarred for malpractice.

Doan said it’s clear Le’s 2020 vote “supports the ‘defund the police’ movement,” pointing to minutes from the meeting. He also said the firefighter union’s support for Esparza was always expected, as the incumbent worked with the union the last four years.

“I have numerous supports in District 7 and across the city of San Jose because they know I’m the best candidate in the race,” Doan said.