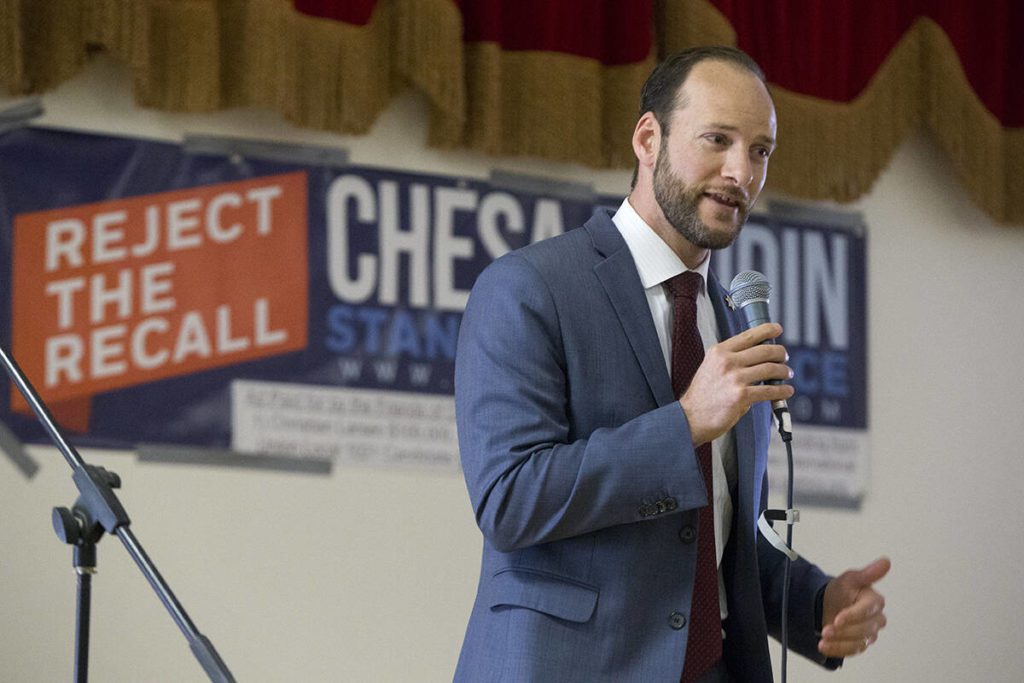 With the school board recall out of the way, San Francisco voters face yet another consequential decision: Whether to boot District Attorney Chesa Boudin from office in June. If I had to bet, I’d put my money on Boudin getting recalled.

It will have little to do with his policy decisions. After all, Boudin’s doing what he said he would do when voters elected the former public defender as their chief prosecutor, making him one of those rare politicians who follows through on promises. No, Boudin will likely pay because he’s an inexperienced outsider politician — and because he makes a perfect scapegoat for our collective dissatisfaction with life in the 21st century.

Scapegoating is an ancient practice that’s even mentioned in the Old Testament. The word comes from the crude ritual of projecting all blame or sin onto a goat, then banishing the creature into the wilderness. I see a similar thing happening with Boudin.

Don’t get me wrong. Boudin has made his share of mistakes, but nothing resembling the exaggerated claims of those demanding his overthrow. His detractors portray him as the root of all ills. Every crime trend — even those pre-dating his tenure — can somehow be blamed on him. Car burglarized? Blame Boudin. Walgreens and CVS closing hundreds of stores nationwide? Boudin’s fault. National fentanyl epidemic? Thanks, Boudin. Police not making enough arrests? Boudin hurt their morale.

“Chesa Boudin is the scapegoat in The City for anything that happens that isn’t positive,” Supervisor Hillary Ronen told the San Francisco Chronicle last month.

I support holding politicians accountable, and I believe that people who depend on public approval for their jobs tend to get what’s coming to them. But the local outbreak of what some call “Chesa Boudin Derangement Syndrome” is on another level.

It’s absurd because one relatively green politician who’s only held office for two years cannot logically bear responsibility for decades of societal failure. Addiction, crime and poverty existed here 150 years before Boudin’s ascension and will persist after he fades into history.

In today’s San Francisco, however, everything seems to be the fault of Boudin. That’s because Boudin is more than a public official. He’s a symbol. Born to parents with infamous Weather Underground roots, educated at elite universities, he’s a bit like radical royalty. This pedigree might normally help him in a progressive city, but he’s an outsider here. His narrow victory upset a local political establishment with cliquish manners and a long memory. He benefited from The City’s convoluted ranked-choice voting process, beating the mayor’s hand-picked favorite, Suzy Loftus, by just over one point.

His close win signaled a key victory for the national movement to elect more progressive DAs, but timing is everything. The COVID pandemic, a national spike in violent crime and surging drug overdose deaths all provide his opponents with plentiful fodder to use against him. He also earned the ruthless scorn of the police union when he righteously decided to uphold his pledge to prosecute police brutality.

Of course, the police union also despised his predecessors.

A look through The Examiner’s archives reveals previous DAs faced some of the same accusations now hurled at Boudin. Running a dysfunctional office? Kamala Harris used that line of attack to help defeat Terence Hallinan in 2003. Eroding SFPD morale? The police union used this familiar trope against Harris after she declined seek the death penalty for a cop killer in 2004. Not winning enough convictions? Both Hallinan and Harris faced criticism over conviction rates. So did George Gascón, the man appointed by Mayor Gavin Newsom to replace DA Harris after she became California attorney general.

None of these DAs got recalled for their alleged failings, but times have changed. Today, the DA gets blamed for everything. In addition, wealthy donors — like Republican billionaire William Oberndorf, a main funder of the Boudin recall — have taken an increasingly active interest in manipulating The City’s politics. They see Boudin as an easy target, and maybe they’re right. But would his defeat be a victory for good government or propaganda?

For example, one of the key claims against Boudin is that he enables open-air drug dealing in the Tenderloin. Yet data provided by Boudin’s office shows he does actually prosecute drug dealers, filing charges in over 75% of felony drug arrests. Few of these cases result in lengthy prison sentences, a fact critics attribute to Boudin’s leniency. Yet these outcomes are partly beyond his control.

Over the past decade, California abandoned mass incarceration as a management tool for the problems created by social inequity. The state reformed its criminal justice system to reduce prison populations and create alternatives to incarceration for nonviolent crimes. Much of the criticism of Boudin as a prosecutor hinges on the idea that this avowed reformer should try to lock up as many people as possible despite shifts in state law that make this fantasy improbable.

These shifts, driven mainly by Gov. Jerry Brown and then-Lieutenant Gov. Newsom, started in 2011 (before Boudin had even taken the bar exam). Conservative legislators railed against these Democratic reforms, promising “blood in the streets.” Although crime rates dropped to historic lows, they have maintained their staunch opposition for over a decade.

On Tuesday, they were at it again, introducing a bill to repeal Proposition 47, a key reform adopted by nearly 60% of California voters in 2014. A few hours later, the bill died a predictable death in committee, ensuring Republicans the ability to continue blaming every crime on Democratic policy even though crime rates reached historic highs under Republican leadership.

The crime attack hasn’t worked against Newsom, who championed Prop. 47 and crushed last year’s recall. It might work on Boudin, who will confront a broader local base of generally disaffected voters and political opportunists.

In 2022, polls show Californians are worried about crime. A recent UC Berkeley Institute of Governmental Studies poll found 65% of Californians believe crime has increased in their area, with 51% saying Newsom has done a “poor” or “very poor” job on the issue.

Wait a second. If this is a statewide sentiment, how does it make sense to hold Boudin, in particular, accountable? The answer is that it doesn’t have to make sense. Politics ain’t fair. Disgruntled San Franciscans will saddle Boudin with blame and put him out to pasture unless he finds a way to change the narrative.

Toppling Boudin wouldn’t solve our problems, of course. Drugs, robbery and crime will continue to sully our wonderful bastion of extreme economic inequality, as always. We’ll just need someone else to blame.

This complicates things for Mayor London Breed, the most likely future target of our collective wrath. Surely, she must grasp the peril she will face if we don’t have Boudin to kick around anymore.

Share
Facebook
Twitter
Pinterest
WhatsApp
Previous articleEditorial: Is San Francisco funding unlicensed security guards in Tenderloin?
Next articlePolice Chief Bill Scott on the state of S.F.: ‘I just try to do what I believe is right’
- Advertisement -