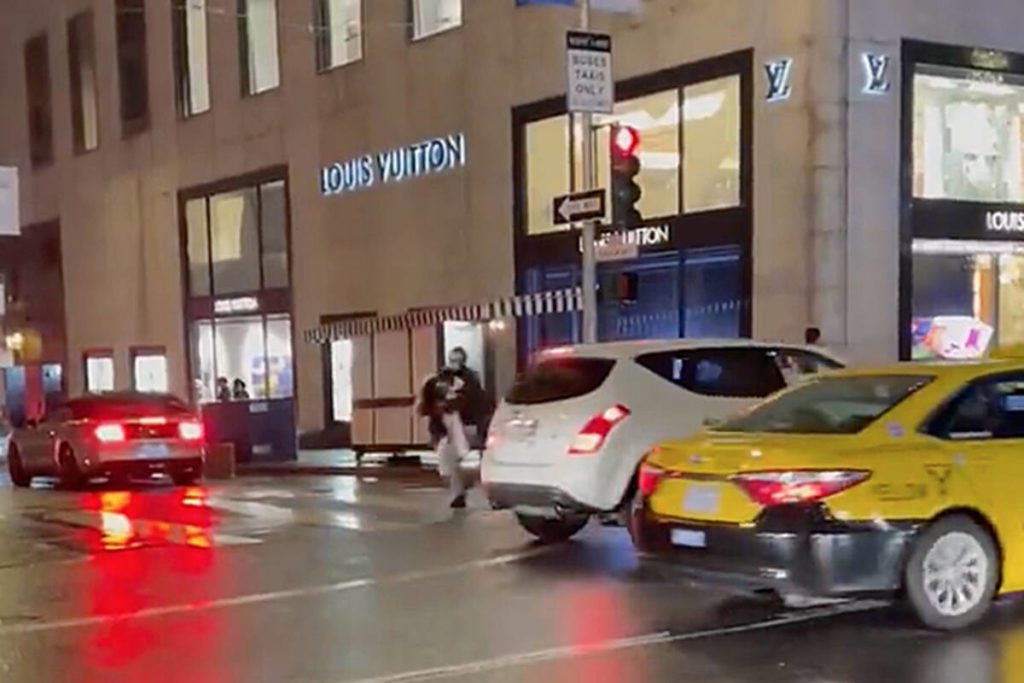 Consider the curious case of Tomiko Miller, one of the men arrested in the mob burglary of the Louis Vuitton store in Union Square in November.

His story may help shine some light on the complicated debate surrounding public safety in San Francisco. Or it may just depress the hell out of you. Either way, it’s worth telling the tale.

Miller is a convicted felon. On the night of the Vuitton burglary, a passenger in his car had a gun. You might remember the viral video of Miller’s Mustang getting bashed by the SFPD. People running in every direction. It was the night of Nov. 19. And it was chaos.

Miller tried to drive away during the melee, bumping into a squad car. But the cops dragged him out of his vehicle, while breaking out all his windows, apparently catching him in the face with a baton in the process.

You’d think a suspect with prior convictions and repeat offenses in such a high-profile case would be detained until trial. But he wasn’t. He was released with an ankle monitor bracelet. Which he apparently removed.

Then he went out and got arrested again, charged with multiple counts of burglary. A mere three months later.

This is the kind of thing that’s driving people nuts in this town. What’s going on with our court system? Is there no punishment for criminals in San Francisco?

Well, it’s not that simple. In fact, it’s diabolically complicated and the reality of the situation fluctuates wildly, depending on who you talk to.

The growing chorus of law-and order advocates in town would tell you:

San Francisco’s court system is broken! Our district attorney refuses to prosecute criminals. Our judges are too lenient, handing out diversionary sentences that let people out of jail with no real accountability. Tomiko Miller is the ultimate example.

Progressive members of our legal community tell a different story:

Tomiko Miller never had a chance! This is a young man who grew up in poverty and was never taught how to seek gainful employment. He’s not a violent criminal. He knows how to make money by robbing cars and stores. The man deserves punishment, but diversionary programs have shown to work in turning recidivist criminals into productive members of society. It’s a better path than throwing people into jail.

The police are somewhere in the middle:

If our DA and judges want to let everyone out of jail, then where are the social programs awaiting these people? You can talk about diversions and better solutions all you want, but if we don’t have the systems in place to help these people, then what the hell are we talking about? We’re letting people out and leaving them to their own devices. And you know where that leads.

Ugh. They’re all right. Which makes this whole thing so wrong.

I’ve spent the last month or so looking into Miller’s case, talking to people involved, attending one of his preliminary hearings to get a measure of the man. To be honest, that was the hardest part.

Miller, 23, hails from the Bayview. He’s been staying with his mom in Antioch of late. He recently had a child. He’s in a trade union, but his number is pretty high and doesn’t get called for jobs much. He’s a prolific thief who faces four charges in the Louis Vuitton case, along with another three tied to an auto theft spree that happened in The City on March 3.

Seeing him up close, my heart sank. Tomiko Miller is just a little bit older than my own son. And he’s in a world of trouble.

“You’re dealing with a guy who has no training in life. He’s never been taught to hold a legitimate job in his life. In his heart, he’s a good guy. He has a son,” said Neil Hallinan, Miller’s lawyer.

Regarding the Louis Vuitton case, Hallinan says his client was late to the scene, saw the situation unfold and decided to join in. He described it as a crime of opportunity. Regarding the March 3 burglaries, the lawyer told me Miller was having trouble providing money for his young child. He turned to the only way he knew.

“If Tomiko is the person they say he is, (he) has a history of burglarizing cars. But to me, what (this case) ultimately says goes back to resources. We have too many communities that are disadvantaged, with children who grow up ‘at risk.’ I know his mother is a very nice, loving mother. I don’t know what kind of challenges she might have had while he was growing up. But had Tomiko Miller received the proper vocational services to learn how to not just get a job, but hold a job, I don’t think he’d be in this position.”

“You can’t make up for past wrongs by not doing the right thing now,” said McCray. “Everyone knows the history of African Americans in America. We know where we started. That doesn’t mean all of us are still staying in that same mind frame.”

In terms of lenient sentencing and releasing repeat offenders prior to trial, McCray questioned the practices she sees in San Francisco courts. And her comments speak directly to Miller’s situation.

“We can open the jails and let everybody out. But do we have a plan in place for when people reenter society?” she said. “What are they going to do? What skills do they need to be self-sufficient? Where are the programs that you tout for them?”

That’s a huge part of the equation in this city. Diversionary sentencing needs significant services behind it. An ankle bracelet doesn’t cut it.

The Miller case was brought to my attention by a group called Stop Crime SF, a volunteer organization that monitors cops and courts on a mission to prevent crime in San Francisco neighborhoods while giving victims a voice.

Joel Engardio, who founded the group in 2016, is increasingly concerned San Francisco’s 52 Superior Court judges are giving too many people a free pass. Worse yet, it’s incredibly hard to even figure out what’s going on in our courts. San Francisco’s system for obtaining court hearing transcripts is archaic, involving snail mail requests and in-person appearances. It’s expensive, too.

“The courts are very mysterious, very opaque,” said Engardio. “Part of our mission is to educate people on how the courts work and what they do.”

In a recent blog post, titled “Let’s shine a light on our mysterious judges,” Stop Crime SF highlighted a study by the California Policy Lab which looked at how many suspects committed crimes after they were set free by San Francisco judges while awaiting trial. The study focused on something called, “The Public Safety Assessment (PSA), an empirically-based risk assessment tool that is used to inform pretrial release decisions across the country.”

San Francisco adopted the PSA model in 2016, and judges are supposed to use it to inform their decisions on pretrial releases. According to Stop Crime SF, “In San Francisco, 73 percent of judges detained the suspect pre-trial when the algorithm suggested it. But 27 percent did not.”

The Examiner was unable to discern whether Miller’s release after the Vuitton burglary was influenced by a PSA or not. But we can report the district attorney’s office has argued strongly for Miller’s detention going forward. The DA’s office did not respond to a request for comment.

So, where does this leave us? Confused and concerned. We have a society that produces people who see crime as their only way of making money. A criminal justice system that desperately wants to be compassionate, but fails to provide the proper resources for reform. And a general public that feels unsafe.

This is what’s happening in our town, folks. While we debate crime rates and consider recalling our DA, let’s also take a look inward. In my case, it’s pure conflict. My liberal leanings sympathize. My more conservative side condemns. It feels as if all parties involved have failed.

Meanwhile, Tomiko Miller remains detained in the county lockup awaiting his next court date on May 6.

The Arena, a column from The Examiner’s Al Saracevic, explores San Francisco’s playing field, from politics and technology to sports and culture. Send your tips, quips and quotes to asaracevic@sfexaminer.com.