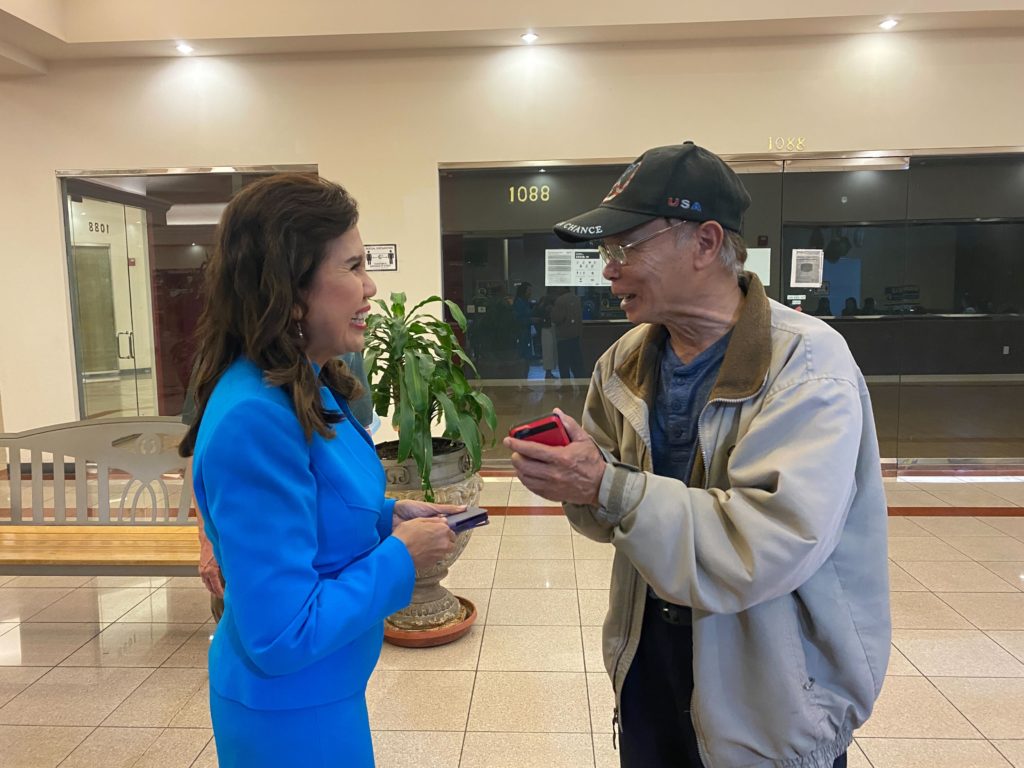 Councilmember Maya Esparza appears to have pulled ahead over two challengers who had hoped to unseat the progressive incumbent.

Esparza is holding the lead with 44.29% of the vote, with 2,598 votes as of 8 p.m. Tuesday. The two challengers are neck to neck with only two votes separately them after the polls closed.

“I know that more votes will be counted,” Le told San José Spotlight. “I did my best and feel confident that I shall lead later.”‎

Le said she expects to close the gap between her and Esparza because many residents in the Vietnamese community voted in person on Election Day.

“I worked as hard as I could this time,” she told San José Spotlight. “I’m expecting more votes for sure.”

District 7 candidate Van Le talks with a supporter. She is  in a dead heat with Bein Doan. Photo by Tran Nguyen.

Between 60 to 70 people came to support Van Le. Photo by Tran Nguyen.

Esparza and Doan did not immediately respond to inquiries.

Esparza, who edged out former Councilmember Tam Nguyen in 2018, is seeking a second term to represent some of the most diverse neighborhoods in the city. District 7 is home to Kelley Park, the San Jose Giants and San Jose Vietnam Town. After last year’s redistricting process redrew political boundaries, the district is comprised of roughly 47% Asian voters and 37% Latino.

With Nguyen losing his seat and former Councilmember Lan Diep being unseated in District 4 in 2020, Vietnamese community leaders and residents in the district are eager to see a Vietnamese policymaker on the council again.

Esparza has the support of San Jose Fire Fighters Local 230, Congresswoman Zoe Lofgren, the Santa Clara County Democratic Party and the South Bay Labor Council, which has spent more than $17,000 to support her campaign. Esparza touts her record of improving public safety, funding street improvements and addressing the impact of homelessness. Esparza, a Democrat, has raised $103,520 as of May. Labor unions also helped Esparza’s fight, spending  on mailers and phonebanks for the incumbent.

Le, 63, has run for City Council and state Assembly several times and is a longtime leader in the Vietnamese community for more than three decades. The school boardmember wants to address public safety and gang activities, solve homelessness and improve communication between City Hall and residents. With the support of Santa Clara County Supervisor Otto Lee, East Side Union board President J. Manuel Herrera and Nguyen Khac Binh, major general of the armed forces of the former Republic of Vietnam, Le has raised $106,596.

Doan, 57, is a San Jose fire captain for 11 years. He said his priorities are to address homelessness, crime and the increasing cost of living in the area. Doan has scored endorsements from San Jose Councilmember and mayoral candidate Dev Davis, former District 7 Councilmember Tam Nguyen, former San Jose Councilmember and county supervisor candidate Johnny Khamis, the Silicon Valley Biz PAC, and Common Good Silicon Valley PAC, which spent more than $77,000 to aid his campaign. Doan has raised $86,265 as of May.

The race has gotten contested with Doan and Le attacking each other over their records days before the election.