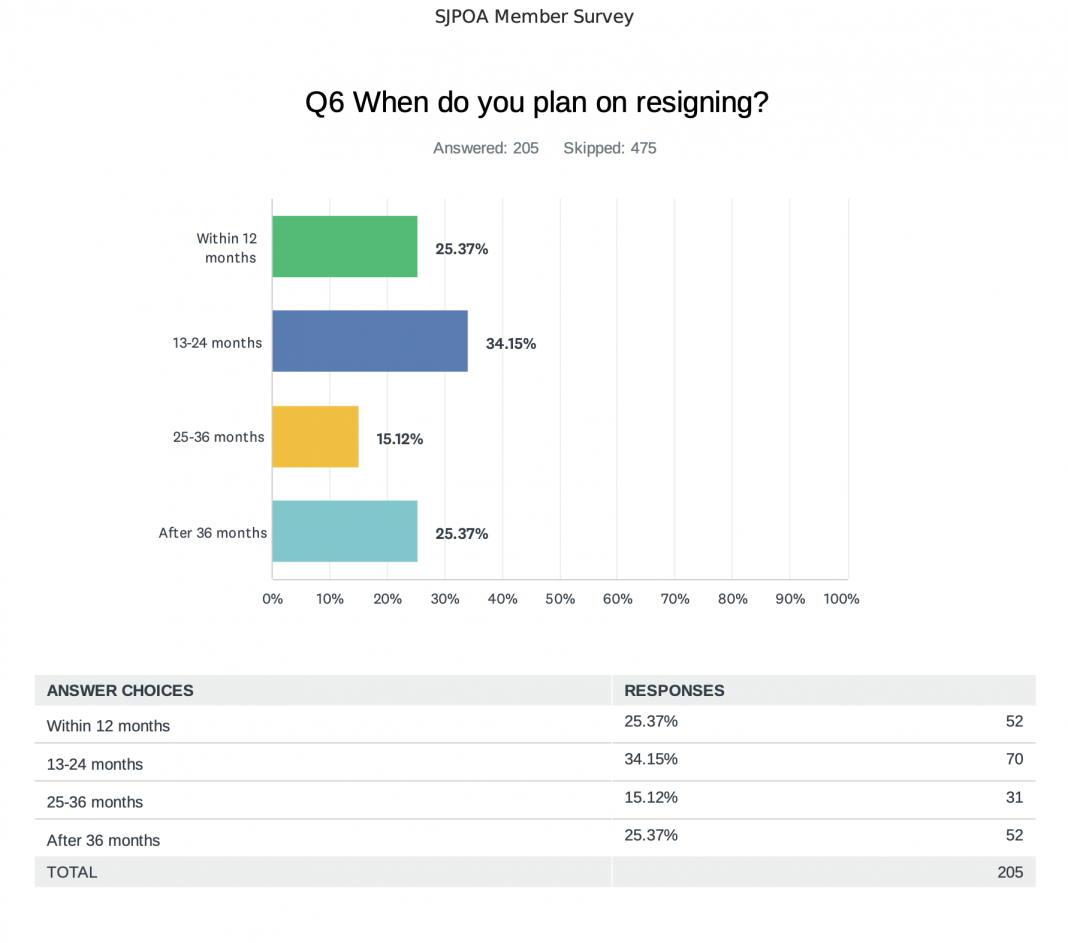 The San Jose Police Department should expect a mass exodus of officers in the next three years, union leaders said.

A survey conducted by The San Jose Police Officers’ Association shows more than 200 officers are planning to resign—with more than 150 wishing to do so in the next 36 months. Among those planning to leave, four out of five officers cited the lack of support from the city as the reason. Officers said issues such as salary and benefits also contribute to their departure plans.

Union leaders said the issue is years in the making and the result of city leaders failing to address chronic staffing issues. The police union is in contract negotiations with the city. According to city officials, the police union’s latest proposal is a 14% pay increase over two years—8% in 2022-23 and 6% in 2023-24—and a $5,000 bonus.

“These numbers are jaw dropping,” union President Sean Pritchard told San José Spotlight, adding 77 other officers, eligible for retirement, plan to do so in the next three years. “We’re drowning. SJPD is calling 911, and there’s no lifeline.”

The survey includes answers from 680 officers—less than half of all union members, spokesperson Tom Saggau told San José Spotlight. The union believes the real number of officers planning to resign would be much higher if all members responded, Saggau added.

Among more than 200 SJPD officers planning to resign in the near future, roughly 150 of them wish to do it in the next three years, a survey by the union shows. Chart courtesy of SJPOA.

The San Jose Police Department, the most thinly-staffed law enforcement department of any major U.S. metropolis, is already struggling with a surge in retirements and challenges in recruiting officers, San José Spotlight previously reported. The department has seen 206 officers retire or leave the department since January 2021, according to the police union. Plus, sworn officer applications dropped last year.

While the police union claims there have been 206 separations since January 2021, city officials said there were only 165 separations, 86 of which were retirements. Of the remaining 79, three were deaths, 11 were terminations, two transferred to civilian positions and three resigned in lieu of termination. Twenty-one resigned during the Field Officer Training program, leaving approximately 39 officer resignations outside the training program.

Union leaders said SJPD is doing the work of a department at least double its size. San Jose is serving more than a million people with approximately 1,153 sworn officers, while San Francisco employs a police force of more than 2,100 sworn officers, with a population of about 875,000.

“We should have up to 2,400 police officers based on the national average,” Pritchard said. “But on its best day, we’re pushing maybe 950 officers who are ready to hit the street and answer a 911 call.”

The chronic staffing shortages in the police department have intensified over the past decade. Hundreds of officers left following former Mayor Chuck Reed’s push for a ballot measure to reduce pension benefits. The situation became further exacerbated as the city’s population increased and calls for service rose. The department is now mandating officers work overtime as its ranks continue to shrink over the years, Pritchard said.

“The police union is doing its job advocating for its members amid contract negotiations, but it’s the city’s job to stand up for our residents, and to attract and retain officers, with good wages without capitulating to union demands that our taxpayers cannot afford—as we have seen happen before,” he said in a statement.

San Jose Police Chief Anthony Mata said the city is working to address the ongoing issues in the department.

“These are challenging times for law enforcement, not just in San Jose but across our nation. Despite the challenges, the San Jose Police Department is one of the finest police departments in the nation,” Mata told San José Spotlight. “We will continue to provide our workforce, both sworn and professional staff, with the tools and resources they need to be successful, feel empowered and grow professionally. I am proud of the great work our officers perform on a daily basis and their dedication to our community. I will do whatever is in my authority to support our workforce.”

San Jose has tried to address the staffing issue through new investment into public safety in this year’s budget. The city is adding a foot patrolling program of 16 new officers and starting a bonus program for new hires.

The San Jose Police Officers’ Association wants the city to address low staffing with more aggressive hiring tactics, higher salaries and more officer support. The survey shows nearly 70% of officers looking to resign have plans to move to another police department. San José Spotlight previously reported SJPD lost officers to smaller departments such as Sunnyvale or Santa Clara where they can land better salaries or benefits.

“We need to attract the best, (and) we need to retain the best,” Pritchard said. “In order to do that, we have to be competitive and provide a fair wage for the officers who risk their lives every single day.”

The chronic staffing issue also impacts the daily workload, officers said. According to the union’s survey, more than 600 union members said SJPD isn’t adequately staffed to provide “a swift 911 call,” as nearly 350 officers said they have had to wait for a long time for backup. Among 115 detectives who responded to the survey, 96 of them don’t feel they have enough time to fully investigate crimes with the current workloads.

“City leaders continue to play with the numbers—trying to account for people who are in the academy, in the field training program or on disability as the overall staffing numbers,” Pritchard said. “That is just not accurate. It creates a false sense of security, and the residents are going to be the ones who continue to be victims as crime continues to rise.”