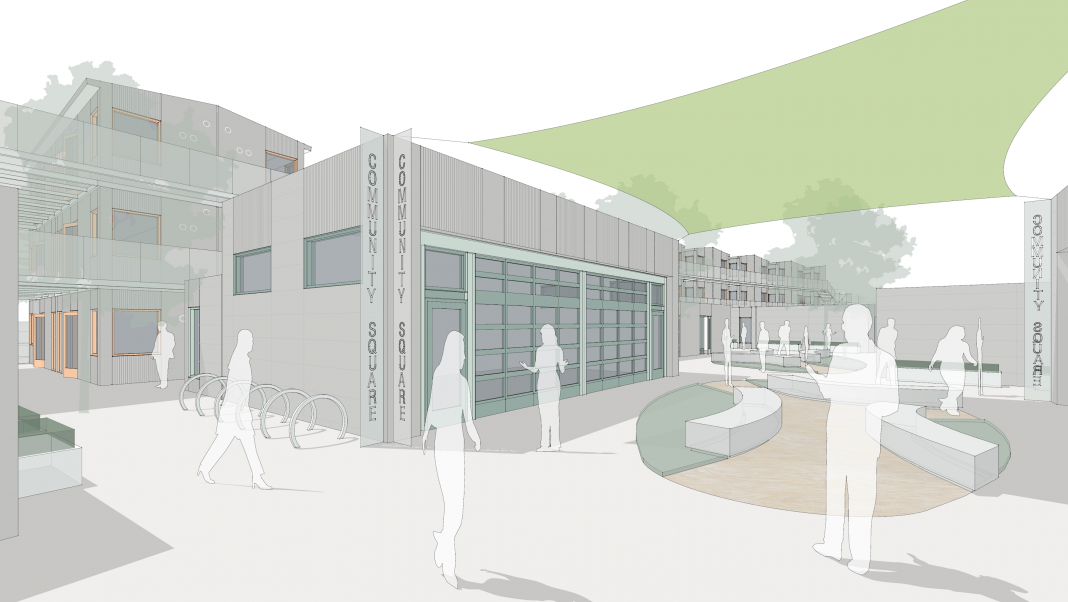 With an influx of $50 million from the state, San Jose is gearing up to build more than 200 prefabricated units in the southern part of the city.

A new housing site on Branham Lane and Monterey Road will be a the first of its kind in the state—a three-story prefab modular project with 204 rooms with private bathrooms. The city is partnering with prolific interim housing site operator LifeMoves to develop the site and offer staffing services that include case management to formerly homeless residents who will be living there.

LifeMoves operates several sites in San Jose, including Julian Street Inn, The New Haven Inn, The Villa and the Georgia Travis House, among others across Santa Clara and San Mateo counties. LifeMoves also received a $26.6 million contract with Palo Alto this week to develop an interim housing site to shelter 300 people.

“This is a model that I think is somewhat revolutionary,” Mayor Sam Liccardo said at a Thursday news conference. “Rather than building apartment complexes that may take five or six years, we’re building projects in a matter of months. And rather than building projects that take $800,000 per unit to build, we’re building units at a small fraction of that cost early on through the pandemic, (costing) less than $100,000 per unit.”

A rendering of the prefabricated homeless housing site planned for Branham Lane and Monterey Road. Image courtesy of San Jose.

The city and LifeMoves do not have a total cost estimate or timeline for the project yet, but the $51.6 million in state Project Homekey funds will help with construction and staffing on site, according to the mayor’s office.  The site will need to be built within a year in accordance to state law.

Tiny homes are coming, whether San Jose lawmakers like it or not

San Jose wants hundreds of short-term homes, only 76 in the pipeline

The prefab units are pre-built in a factory, rather than constructed on site, making them cheaper and quicker to build, said Joe Stockwell, former LifeMoves board chair. The efficiency of such sites helps San Jose get hundreds of homeless individuals off the streets, housed and into programs that lead to permanent supportive housing. At sites, such as the one planned at Branham Lane and Monterey Road, about 82% transition to some form of housing and 56% go into permanent housing, according to Liccardo.

“These projects continue to give hope and support to our unhoused community,” said Councilmember Sergio Jimenez, who represents the area where the Branham site will be built. “I have no doubt that this project will be just as successful as the other projects in our district.”

District 2 in South San Jose has the most interim housing sites in the city. It’s been a point of contention for residents, especially as the city moves forward with another divisive plan on District 2 border—a safe parking program at the VTA Santa Teresa Station that has riled up residents in the area.

City officials say these plans are necessary tools to combat the ever-growing homelessness rate in the region. In San Jose, despite housing more than 6,000 unhoused residents, the homeless population has increased 11% since 2019.

In the beginning of the pandemic, San Jose set a goal to build 1,000 prefab units by the end of 2022. With this new site, San Jose is much closer to its goal with 717 units under construction or in development.

Other projects planned include a new quick-build community in District 10 on Caltrans-owned land at Great Oaks Boulevard and Highway 85. Another project is to expand the Rue Ferrari interim housing site from 118 beds to 218. The San Jose Police Department parking lot will add 20 more beds to the 76-bed tiny home site. The most contentious of all the projects is a 100-bed tiny home site on Noble Avenue in North San Jose.

Shaunn Cartwright, a homeless advocate and co-founder of the Unhoused Response Group, said quick-build interim housing sites are helpful, but not the end-all solution.

“They are far from ideal, but these shelters get more people off the street immediately because they can be done in a matter of months,” Cartwright told San José Spotlight.

Cartwright is excited for this project to come to fruition—especially because each unit has a private restroom which is helpful for seniors and those with disabilities, she said. The only downfall, in her opinion, is that the site is located in an area with limited access to food, medicine and other necessities. An area known as a “resource desert.”

“I hope they offer a shuttle service to get seniors or folks to places they need to go like the grocery store or the pharmacy,” Cartwright said. “The entire South Side is a resource desert.”