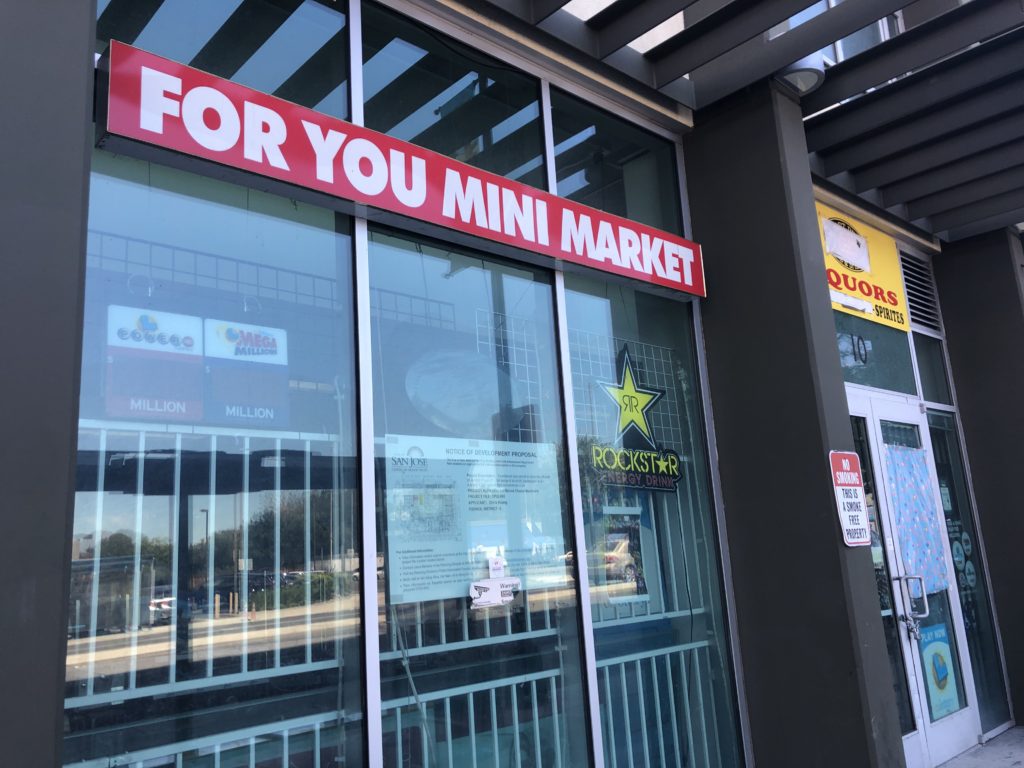 A San Jose mini-market wants to sell alcohol, but is getting pushback from the city.

The San Jose Planning Commission voted unanimously in May to recommend a permit for the For You Mini Market, located at 350 Barack Obama Blvd., to sell alcohol. Commissioner Chuck Cantrell was absent.

But Mayor Sam Liccardo and Councilmembers Raul Peralez and Dev Davis oppose the idea, and the fate of the mini-market is now uncertain since the city dropped the request from Tuesday’s meeting.

Cuong (Chris) Hoang, a representative of For You Mini Market, filed an application with the city in February. He could not be reached for comment.

The For You Mini Market in San Jose on Barack Obama Boulevard. Photo by Lorraine Gabbert.

Planning Commissioner Pierluigi Oliverio said as a prior city councilmember, he isn’t a fan of approving liquor licenses not connected with full-service restaurants and grocery stores. Although he didn’t vote against it, Oliverio said the mayor and councilmembers have the right to oppose any item that comes before them.

“The planning commission has a rather narrow role,” he told San Jose Spotlight. “Councilmembers can have discretionary authority.”

Another round: To-go alcoholic drinks continue in San Jose

Oliverio said the city recommended approving it and the only opposition came from competing vendors. He said applicants who are denied permits don’t receive refunds, as their fees are used to pay for staff time.

Oscar Villalobos, assistant manager for the Chevron gas station across the street, told planning commissioners granting an alcohol permit to the mini-market would create problems for neighborhood businesses and residents in the area. Another store selling alcohol would increase the crime rate in an already high crime location, he said.

Although the nearby Shop and Save Market sells beer and wine, Davis said even one more mini-market selling alcohol is too many. She also objected to the owner allegedly selling alcohol in the past without a license.

“Why would we want to frankly reward someone who was not following the rules in the first place by giving them an alcohol license?” Davis said. “The new owner kept selling alcohol without a permit. Our code enforcement confirmed that.”

She is also concerned that having alcohol sold next door to the Pensione Esperanza affordable housing project, which includes residents struggling to recover from alcohol or drug use, would be detrimental.

“It takes away their opportunity to go into a place that doesn’t hold temptation for them,” she said.

Getachew “Alex” Alemayhu, owner of Habesha Mini-Mart on Barack Obama Boulevard, said it’s sad to hear a liquor license may be denied to the neighboring business. He said a few people in the neighborhood complained about the pending alcohol sales, but the majority are in favor of it.

“I don’t understand after he spent all that investment why they’d say no,” he said. “It’s absurd. I feel sorry for him.”