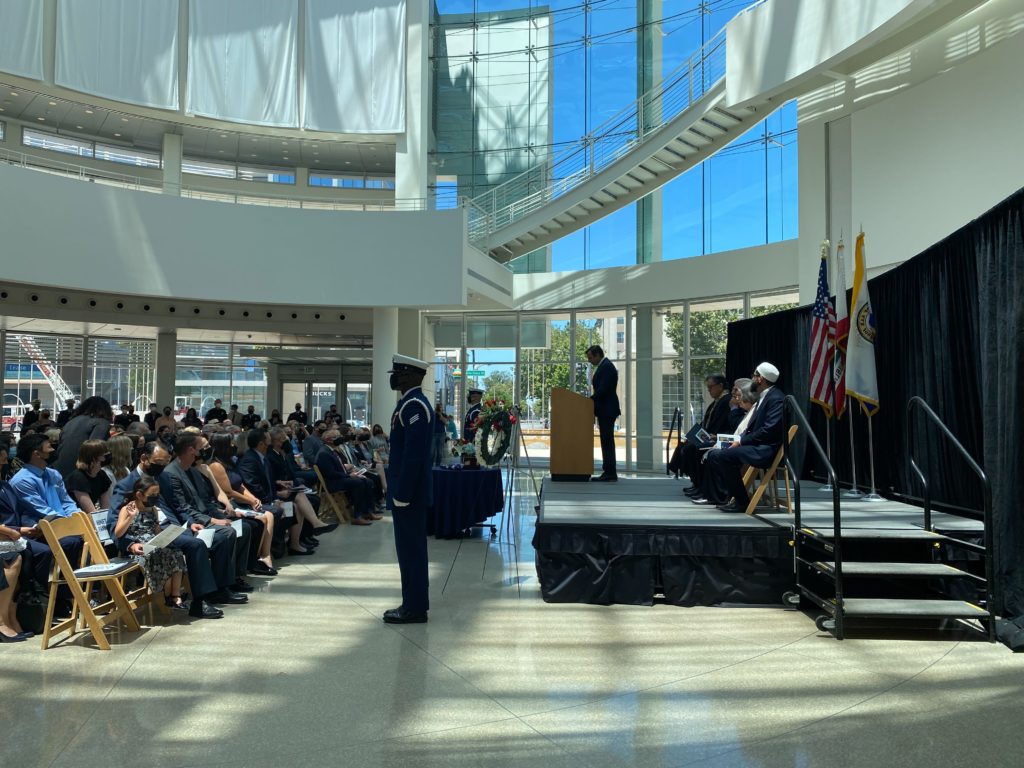 Mineta is a local legend known for his advocacy during the September 11, 2001 attacks. As the secretary of transportation, he swiftly directed planes to fly into Canada, issued statements to several national airlines to avoid discriminating against Arabs and Muslims and was instrumental in creating the Transportation Security Agency. For that, the city’s airport was named in his honor the same year.

Mineta’s family and his remains traveled by motorcade through Mineta San Jose International Airport and Japantown, including a stop at the Mineta family home, ending at San Jose City Hall. His remains will rest in the rotunda for public viewing until 7 p.m. A public memorial service is scheduled to take place Thursday at the Civic Center at 10:30 a.m.

Liccardo, along with other officials and close friends, recounted fond memories of Mineta, sharing that he never forgot someone’s name and describing him as a true gentleman. Mineta’s loved ones hugged each other as they fought back tears and held hands as they laughed as wholesome stories were shared about him. The city also officially dedicated June 16 as Norm Mineta Day.

“He was the most impactful person in San Jose,” said Rod Diridon, a close friend of Mineta and another transportation legend.

Mineta was born in San Jose to Japanese immigrant parents in 1931. In 1942 during World War II, the Mineta family—all California residents fluent in English—were part of the thousands of Japanese Americans forcibly taken from their homes and moved to internment camps. The government moved them to the Heart Mountain Relocation Center in northwest Wyoming.

Mineta’s political career started in San Jose in 1967 as the city’s first Asian American councilmember, before serving as mayor from 1971 to 1975. In a 2021 interview with San José Spotlight, Mineta said his background and experience in the internment camp inspired his advocacy and public service. He took a vow of silence when he was sworn into the City Council.

Mineta’s son, David, described his father as someone dedicated to his family and his work. He told San José Spotlight his father used to drive from Washington D.C. to Alexandra, Virginia to attend his high school baseball games. After cheering on the team he’d drive back to Congress to finish his work.

“At the time, not being a dad, I don’t know if I fully appreciate how much effort that took,” David Mineta said. “To interrupt work just so you could be there for your kid’s baseball game—and not even good baseball.”

David Mineta said his own children joke about their grandfather being a “try hard,” someone who participates in life with too much earnestness or enthusiasm. He believes his father got his drive growing up in an immigrant community where hard work and education weren’t taken lightly. He said you could get a sense of his father’s character by watching him at political dinners.

“He would always be the last one in the room and he was usually talking to the wait staff—food servers and bussers,” David Mineta said. “I always felt like he felt more akin to folks who were serving.”

In his decades-long career, Mineta broke barriers in local government and Congress, ascending to the inner circle of the Oval Office. He served in President Bill Clinton’s administration as secretary of commerce and in Congress representing San Jose from 1975 to 1995. In that time he founded and chaired the Congressional Asian Pacific American Caucus.

“He transcended the racism of the time,” said Blanca Alvarado, the first Latina councilmember in San Jose.

David Mineta said his father made a point of doing his own correspondence, even though this kind of work could have been given to an intern or staffer.

“After working all day he’d come home, get changed into his sweats, and he’d start on the correspondence, and literally his second day of work would begin,” David Mineta said. “It was so important to him to make sure someone in government was taking the time to make that personal touch.”