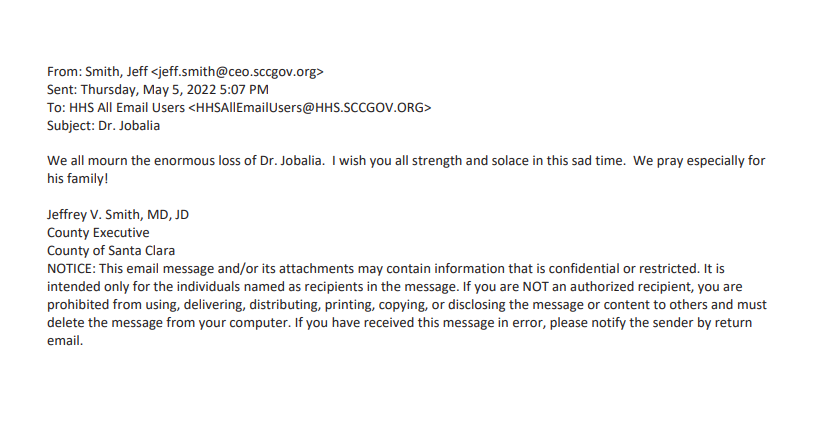 San José Spotlight obtained an email sent from County Executive Jeff Smith to county health care workers after Dr. Amul Jobalia died by suicide in his office in May. Jobalia was a nephrologist at Santa Clara Valley Medical Center for roughly two decades.

The email went out to thousands of people in the county hospital system the day after the doctor’s death.

“We all mourn the enormous loss of Dr. Jobalia. I wish you all strength and solace in this sad time. We pray especially for his family!” Smith said in the email.

A screenshot of an email sent by County Executive Jeff Smith in the wake of a doctor’s suicide.

Doctors say Smith’s brief email came across as tone-deaf, as the workforce reeled from the sudden tragedy. County physicians said the curt email was the last straw for many who were already frustrated with ongoing workplace issues.

“Everybody was grieving, or sad and confused. They were looking for a leader to provide support and solace,” Steve Harris, chairman of Valley Physician Group, told San José Spotlight. The union represents more than 450 county-employed doctors at three public hospitals. “This email was such a profoundly perfunctory note, it was not a condolence. He didn’t even take the minimal amount of time or effort, and it struck people as (such).”

Jobalia was an impactful doctor at Valley Medical Center, beloved by patients and staff, he added.

County doctors responded to Smith saying they were furious and devastated by his email, adding they were “fed up with (his) inept leadership style.” Smith responded with another email, thanking VMC health care workers for sharing their feelings. The doctors noted he didn’t apologize for the first email.

The emails are coming to light as county physicians fight for a new contract, demanding the county increase pay, hire more workers, reconsider workload and include them in the decision-making process. Negotiations have dragged on for more than 18 months.

Smith said the union’s grievances stem from disagreements over the contract.

But radiologists at VMC previously told San José Spotlight some equipment funded years ago never arrived or was never installed. In one case, the department is still waiting for a new machine funded six years ago. Some machines are more than 23 years old, technologists said, resulting in a backlog of hundreds of patients and months-long waits for crucial scans.

Smith said doctors are asking for raises that would give some specialists upward of $1 million in annual salary.

“We just can’t recommend that to the (board of supervisors),” Smith said. “The negotiating team has been unreasonable at the table.”

Smith added Jobalia’s death—and a recent suicide attempt by another VMC doctor—has nothing to do with the ongoing issues between the county and the union.

“It’s pretty despicable that some of the doctors in leadership are trying to say that this has something to do with their contract,” he said. “We are very confident we’ll get a contract soon and then things will be back to normal.”

Health care workers are working long hours, taking on the job of two or three people, and in some cases having to watch their patients’ health deteriorate because of the lack of workers and decrepit equipment—all while working without a contract for more than a year.

More than 50 health care workers rallied in front of VMC last month to bring more awareness to the issue. Nine VMC doctors delivered a petition signed by 3,500 workers and residents to the Santa Clara County Board of Supervisors in June demanding better pay and working conditions.

Some doctors said Smith’s dismissal of their concerns as negotiation tactics shows his disdain for their well-being.

“It’s a willful disregard and denial of what’s actually happening,” a doctor told San José Spotlight. “How are we supposed to have confidence or faith (in) somebody to correct these issues?”

Some physicians want the board of supervisors to step in and demand systematic changes at county hospitals. Supervisors Otto Lee, Cindy Chavez and Susan Ellenberg declined to comment due to the ongoing negotiation process. Supervisor Joe Simitian was not available for comment and Supervisor Mike Wasserman didn’t respond to inquiries on the issue.

“The county executive and everybody else in the administration needs to understand and hear loud and clear that (Valley Physician Group) isn’t going away after negotiations are over,” Harris said. “(Smith) is sorely mistaken if he thinks we are going to stop calling out problems at VMC when we see them, because we’re not.”