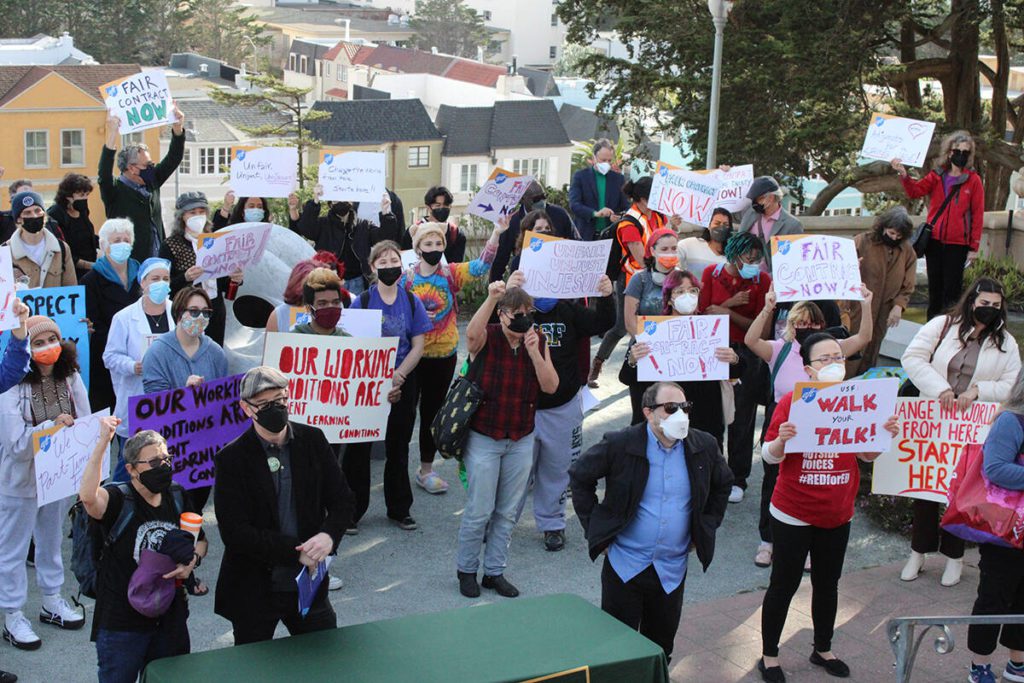 Colleges and universities are facing a reckoning.

As they become more expensive to operate, and as demographics and the pandemic squeeze enrollment, labor strife between administrators, faculty and staff is becoming more frequent. It’s a conflict that is playing out in San Francisco, where three institutions of higher education have been entangled in strikes or labor disputes. Together, experts say, the conflicts are symptoms of a dramatic transformation of the educational landscape.

“Higher education is facing a demographic cliff. We probably have far too many private and public universities than students can absorb,” said Gregory Price, an economics and finance professor at the University of New Orleans. He predicts a major shakeout in the next 10 to 15 years in which some colleges’ businesslike approaches will lead to budget cuts, closures or getting absorbed by other institutions.

City College of San Francisco may be a case in point. CCSF’s looming fiscal cliff has been brought on by an enrollment decline of 35% since 2013. In the past, the Fiscal Crisis and Management Assistance Team, a state-funded agency, and the Accrediting Commission for Community and Junior Colleges (ACCJC), a national accrediting organization, expressed concerns over the institution’s viability.

“Community colleges depend disproportionately upon enrollment revenues,” said Price. “When those things decline, you basically have operational budget deficits and the pandemic pretty much accelerated that.”

Should City College not become financially solvent, a state takeover could take place.

The ACCJC, which monitors City College’s fiscal stability annually to ensure the college is meeting its missions and serving students, has placed City College on its watch list for two years and the school is set to be reviewed this spring to determine accreditation through 2030.

While City College administrators scramble to change their fortunes, faculty and staff are fighting for their jobs. Last month, the Board of Trustees approved layoffs for 50 full-time faculty members in 18 departments and five administrators for the 2022-23 academic year. Before this can happen, more than 300 instructors will have to be laid off as labor regulations require part-time faculty to be let go before full-time layoffs can take place.

Malaika Finkelstein, union president of the American Federation of Teachers 2121 which represents CCSF faculty, called the move “an unconscionable destruction of our college. Just looking at the number of faculty who would be gone, we can’t sustain a college at that level. We can’t serve the people of San Francisco who are trying to come get an education,” said Finkelstein. AFT 2121 claims that between academic years 2017-18 and 2020-21, over 30% of CCSF’s sections were cut and a 36% decline in enrollment followed.

Private institutions are feeling the pinch, too. California College of the Arts (CCA) and the University of San Francisco rely heavily on tuition and endowments for a large portion of their funding. The pandemic affected these streams of income and administrators are tasked with getting back on track.

“Their response has been to try and squeeze costs in other areas, including labor costs, wages for adjunct faculty and things like that,” said John Logan, a labor and employment studies professor at San Francisco State University.

This year, the CCA will shutter its Oakland campus to consolidate operations, a move that has been in the works for over a decade. School leaders believe one central location would cut down on transit costs and the time students spend traveling between both cities. When CCA’s Board of Trustees purchased a tract of land behind the San Francisco campus in 2011, expansion there became a possibility.

As CCA has sought to join its campuses, the staff unionized and tried to flex its muscle.

In February, staff and the Service Employees International Union 1021 struck for four days to protest alleged unfair labor practices. They accused CCA of spending the two years since they formed their union stalling, delaying and violating federal labor laws.

Across town, USF took a two-pronged approach to its budget. The administration entered contract negotiations with the Part-Time Faculty Association last summer, and the pandemic briefly shaped their proposals.

The University Budget and Advisory Committee discussed a possible recommendation that “previously planned compensation increases for fiscal year 2021 and 2022 should be suspended,” but this item was ultimately not voted on and thus not included in their official recommendations.

In addition, USF bumped up tuition for the 2022-23 academic year by 3.5%, with a traditional undergraduate comprehensive fee costing roughly $72,000. An email sent to the USF community in December had USF President Paul Fitzgerald citing “high rates of inflation for goods and services required to operate the university” as reasoning for the move.

Still, there was skepticism about the higher costs argument after an earlier email sent by Fitzgerald in November revealed that the university was experiencing a “larger-than-anticipated forecasted operating surplus in the current academic year.”

“If you tell us that you can buy the San Francisco Art Institute with the $50 million mural, I think you have enough money to afford our (pay increase), which we estimate to be about $475,000,” said Jill Schepmann, president of the part-time faculty association.

On the backs of the adjuncts

To avert their budget woes, colleges have overwhelmingly relied on adjunct professors who can offer high-quality instruction at low cost.

“The number of tenure-track positions open every year sort of declines year in, year out but the number of PhDs continues at a sort of fairly high number,” said Logan.

“There’s a tremendous privilege in talking with young people about their deepest values at the moment in their lives when they’re trying to figure out what those are. That is an extraordinary privilege but the fact that I regarded it as a privilege doesn’t mean that I shouldn’t be compensated for it,” said Rebecca Gordon, a USF adjunct philosophy professor and PTFA policy board member.

USF spokesperson Kellie Samson said, “The parties are currently in a cooling-off period after 20-plus bargaining sessions with the assistance of a federal mediator. Representatives for the PTFA and the University will resume bargaining on March 17.”

After striking for four days, CCA staff met with administration for a week of bargaining talks. Both sides reached tentative agreements on eight proposals. Union representative Jennie Smith-Camejo views the staff’s plight as “a sad statement on how we value education and how colleges are being run more like corporations. They’re looking for the cheapest labor possible,” she said.

As costs soar, faculty and staff will be among those hit the hardest by the squeeze on higher education. “It’s just a problem where the people who actually do the teaching are often the least rewarded,” said Logan.

Editor’s note: An earlier version of this article stated that salary cuts and freezes were unanimously recommended by the University Budget and Advisory Committee for the fiscal year 2022 budget. This statement has since been corrected.

David Cruz, an employee at California College of the Arts joins a strike on Feb. 8. (Craig Lee/The Examiner)