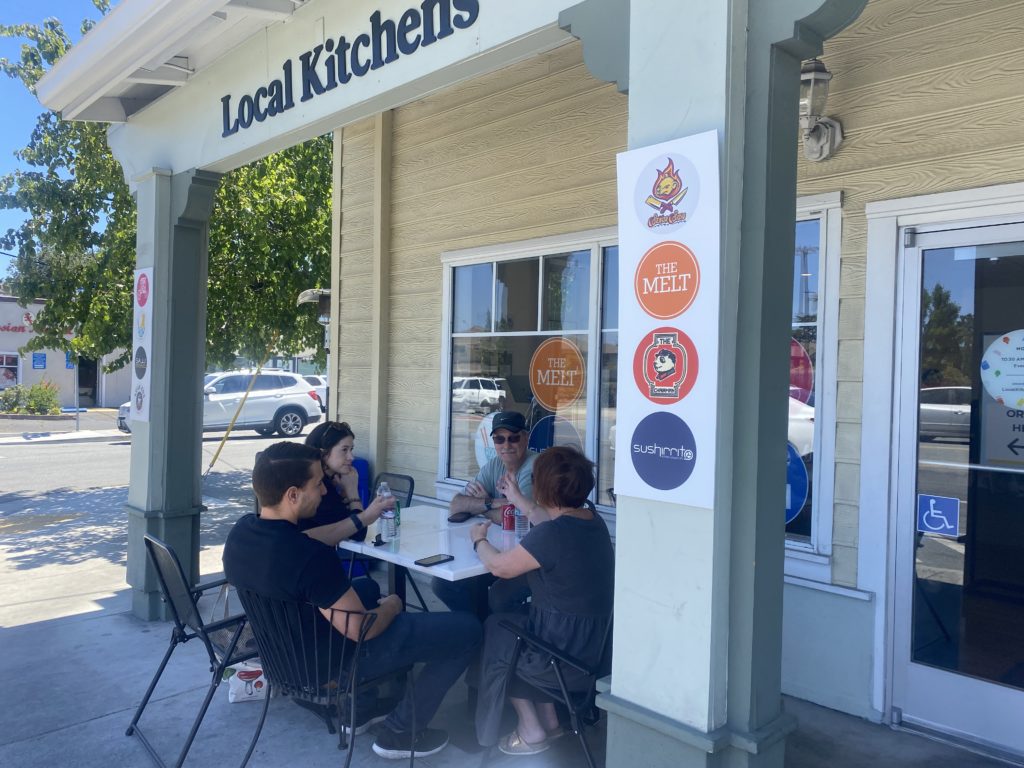 Families across Santa Clara County are flocking to food halls, one-stop eateries to order a variety of cuisines from local restaurants.

Similar to food courts, food halls—also known as “micro kitchens”—let customers come to a storefront to order food from multiple restaurants and enjoy their meal on site. Variations on the idea are popping up throughout the county and filling empty retail space, including ghost kitchens, where food is prepared for delivery with no interface with customers and for a specific restaurant.

Local leaders say they are hopeful that by combining forces to increase business, budding restaurants will be able to cut exploding costs, resolve lack of staffing and help eateries find their footing from the pandemic.

Customers wait outside Local Kitchens in Cupertino for their orders. Photo by Natalie Hanson.

Local Kitchens, a venture capital company founded by former DoorDash employees Andrew Munday and Jon Goldsmith, is making a push to open several locations in the West Valley. A hall on Stevens Creek Boulevard is already open and two other locations in Los Gatos and Campbell are slated to come online. Local Kitchens hosts multiple cuisines under one roof, where customers can order from different eateries at once.

Company representatives did not respond to multiple requests for comment.

Another contemporary food court, Eat Up! Food Hall at South De Anza Boulevard, is designed as a miniature food court with six up and coming restaurants, said Tina Kapoor, Cupertino’s economic development manager. Some restaurants have already opened in the space including Vampire Penguin, Chicken Meets Rice and Noodlosophy.

Eat Up! is a mini food court located in Cupertino with six eateries. As of Saturday, some were already operating and preparing food for customers, while others remain under construction. Photo by Natalie Hanson.

Kapoor said she is excited to see the restaurant sector evolving and experimenting with new menus and ideas, while reducing costs.

“Community members want to go for more experiential retail and eating establishments. I do think food halls can serve that purpose,” she told San José Spotlight. “It’s definitely a tool for inclusive development, sort of the coworking of the eating world.”

Rob Eastwood, community development director for Campbell, said the city is receiving interest in opening commercial kitchens and other nontraditional eateries like food halls. The first one is already being built out in a space formerly occupied by Una Mas in the Hamilton Plaza, at the intersection of Bascom and Hamilton avenues.

“Restaurateurs are finding it cheaper to consolidate their business under one roof, rather than trying to open their own brick and mortar or expand at a time when costs run high,” Eastwood told San José Spotlight.

In the last year, the city has received about five inquiries, ranging from existing restaurants looking for a separate kitchen space to a new ghost kitchen. But none progressed to permit applications, Eastwood said.

Just south of Campbell, Los Gatos is preparing to welcome another Local Kitchens at 681 Blossom Hill Road, although Mayor Rob Rennie said the space is still in the process of securing business license approval.

“I like to see new business models tried out for everyone’s changing needs and tastes, and as a way to stay competitive,” he told San José Spotlight.

Inside Local Kitchens in Cupertino, customers can access multiple eateries and place orders from different chefs, to be picked up all in one location. Photo by Natalie Hanson.

Catherine Somers, executive director of the city’s Chamber of Commerce, said the business should open sometime this summer. She said she thinks this is “huge” for the local economy, reducing people’s need to commute to other cities for a meal. Such business helps fill empty building spaces, employ residents and encourage customers to spend money on restaurants in their own town.

“I am all about convenience, so long as as the tax dollars spent stay in our town,” Somers told San José Spotlight. “This is a dream come true for a lot of families, because they’re just going down to one place to pick up food for everybody.”