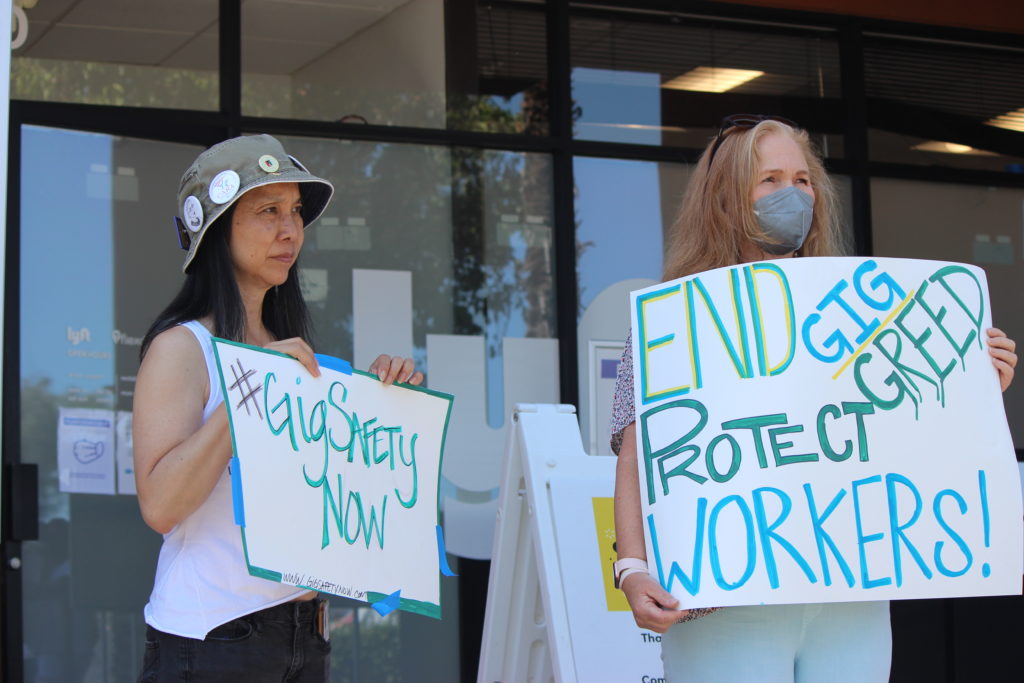 It is a simple ask: gig workers don’t want to be killed on the job.

More than a dozen Lyft drivers and other ride-share app workers rallied for more protections on Thursday in front of the San Jose Lyft office. They want corporations to invest not only in more security, but to also financially support family members when they lose loved ones at work.

Gig Workers Rising, a campaign launched by gig workers, released a report in April that found more than 50 app workers were killed from 2017-2021, and their families did not receive adequate compensation from the ride-share companies, if any at all. Many of the drivers were murdered either by riders, customers or random people, according to the report.

Three of the deaths occurred in the Bay Area: Ahmad Fawad Yusufi in San Francisco, Christina Raymond in Milpitas and Stacy Corley in Walnut Creek. California had the most deaths of any state. Across the country, roughly two workers die per month.

“There’s a crisis that cannot wait any longer to be addressed,” said Gabriel Cardenas, an organizer with Gig Workers Rising. “Death is the extreme, but the daily norm is exploitation.”

Gig workers who were employed by Lyft, DoorDash and Uber shared stories of sexual and physical harassment, inadequate compensation and a lack of support from the companies for reported unsafe conditions and experiences.

San Jose resident Elida Zabaletas said the scariest moment of her life happened while driving for Lyft. A drunk passenger verbally and physically attacked her throughout the ride. The situation became life threatening when he pulled her hair, affecting her ability to drive.

“I had to go to the doctor and have psychological therapy to overcome the trauma,” Zabaletas said, speaking through tears. “I never received a call or a message of support from Lyft during this time. I felt abandoned.”

Other drivers shared similar stories. Rondu Gantt, an organizer with Gig Workers Rising, has worked for Uber, Lyft and DoorDash full-time for the last four years. He was physically attacked and groped on the job, he said. When he got into two accidents close together, he lost his income and his apartment. He said in his time of need, the companies were nowhere to be found.

“Workers like you and me are on the roads risking our lives while Lyft CEO Logan Green is sitting pretty in his mansion with a personal net worth of more than $700 billion,” Gantt said. “And things are worse in California because San Francisco and Los Angeles are their two biggest markets.”

The report caught the eye of state and national leaders, who wrote a letter to Lyft’s CEO urging him to “promptly change direction” and make workers’ health and safety a top priority. In the letter, signed by Senators Bernie Sanders, Elizabeth Warren, Richard Blumenthal and others, they suspect the death toll is much higher than 50 people due to the lack of corporate information. The Gig Workers Rising report relies on publicly available data from news articles or social media postings.

Stacie Shih, a representative for state Assemblymember Ash Kalra, who chairs the labor and employment committee, spoke at the rally on behalf of Kalra.

“Never did I think we would have to ask our companies to protect workers so they don’t die,” Shih said. “At any other company, if a worker dies, actions are taken immediately. So why not gig companies? Maybe it’s because the corporations are hiding behind the app.”

Gig Workers Rising has four demands they believe will make these jobs safer and more supportive for workers: provide additional compensation for families of workers killed on the job; make data on deaths, accidents and harassment incidents public; no forced arbitration and they want to unionize.