What the overturning of Roe v. Wade means for Silicon Valley 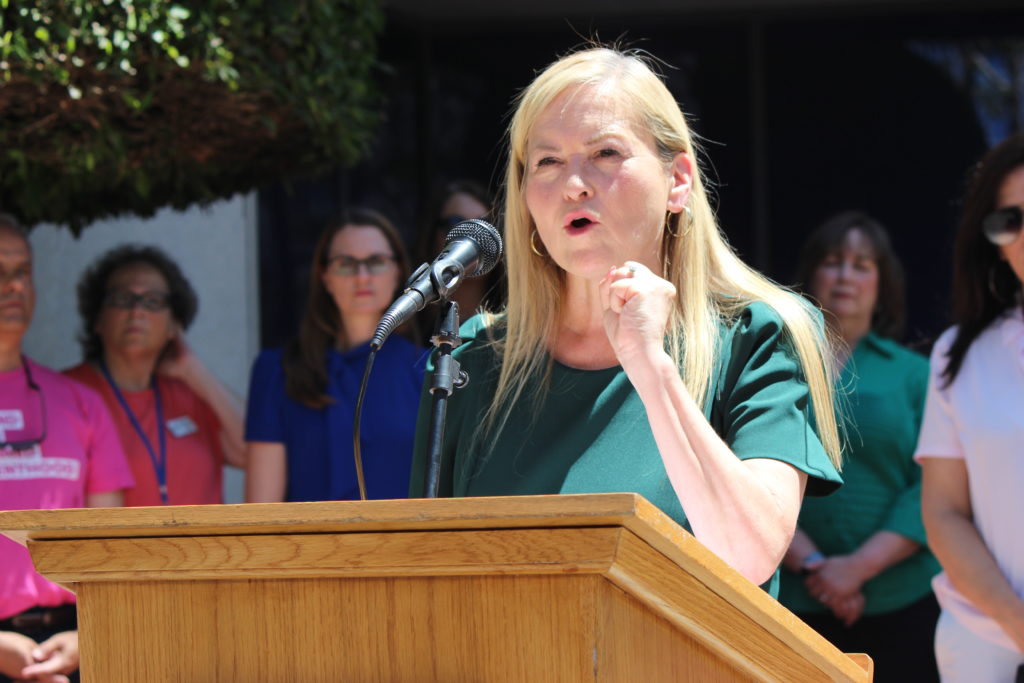 The outrage is palpable with the overturning of Roe v. Wade, but women in Santa Clara County will not be impacted.

“Absolutely nothing is changing,” Santa Clara County Supervisor Cindy Chavez told San José Spotlight. “In fact, not only are we continuing services, but we’re going to be expanding them.”

On Friday, the U.S. Supreme Court overturned the 1973 decision Roe v. Wade that protected a woman’s constitutional right to an abortion. The reversal, which now allows states to ban abortion, was anticipated after news reports in May leaked the draft opinion. After the leak, Santa Clara County Board of Supervisors unanimously allocated $3 million to Planned Parenthood Mar Monte in San Jose to help expand its medical and reproductive care services. San Jose also allocated $250,000 to support the center’s expansion.

“Those who may be living in a state where the right to choose has been fully snatched away, you are welcome to Santa Clara County to receive the care that you need,” County Supervisor Susan Ellenberg said at a Friday rally to condemn the decision.

Between last July and March, Planned Parenthood Mar Monte served 80 out-of-state patients seeking abortions, including 22 who traveled from Texas after the state enacted the most restrictive abortion law in the country. Krause said that number is expected to increase. To accommodate for the national demand, Mar Monte expanded its capacity to accept 500 more patients per week. They are also opening the new Blossom Hill center that could serve more than 16,000 patients in its first year after the expansion—a 10% increase from the current number of patients served annually.

“I want to say loud and clear that our health centers across California are open and we are open to take care of any patients that walk through our doors,” said Planned Parenthood Mar Monte CEO Stacey Krause. Her center is the largest Planned Parenthood affiliate in the nation.

Cindy Chavez assures residents that rights are not going away at a rally opposing the decision to overturn Roe v. Wade. Photo by Jana Kadah.

In San Jose, nearly two-thirds of Planned Parenthood patients are people of color. More than half have a family income below $26,000 a year.

San Jose Councilmember Magdalena Carrasco said the women who will be disproportionately impacted will be Black, Latina and poor women, those who are uninsured or undocumented because they don’t have the same access to travel to safe havens.

“What we will see in those 26+ states is certain death and health complications for these women as they are forced to find clandestine options,” Carrasco said.

Chavez said she doesn’t anticipate the increased demand on local sites will impact residents, even in disenfranchised communities, because of the increased capacity and funding. But leaders warned despite Santa Clara County or California being a bastion for progressive policies, this right is not guaranteed to be protected forever.

San Jose Councilmember Pam Foley and others said the way to protect those rights is to vote – not only for candidates who support the right to chose but a local measure that codifies a woman’s right to choose in the state constitution in California.

“We’re in California. We feel like we’re protected here. But we’re not,” Foley said. “Our rights are in jeopardy here as they are across the country.”

The District Attorney’s office and local law enforcement will not comply with any instruction that would prohibit a woman or doctor from providing reproductive services, Santa Clara County District Attorney Jeff Rosen said.

“It’s okay to be angry. It’s not okay to be angry and not do anything,” San Jose Councilmember Dev Davis told San José Spotlight. She is urging voters to pass a statewide measure on the November ballot that would codify a woman’s right to chose. “Right now we are safe, but we don’t know what congress will do in a year.”

“It is heartbreaking to watch our country go backwards and see our hard-fought progress eroded. But we cannot give up. Now, we must mobilize and do everything possible to save the right to an abortion. That means rallying a wave of public support, ending the filibuster and passing legislation in the Senate to codify Roe v. Wade. It also means addressing the politicization of the Supreme Court that paved the way for this decision. It is time to end lifetime appointments to the Supreme Court to restore judicial independence and trust in the highest court in the land.”

“With the Supreme Court leaving it up to states to uphold these rights, the State of California and State Legislature is committed to protecting reproductive freedom, so that women don’t need to resort to unsafe abortions which will be the brutal reality for many women across our country due to this unjust and hypocritical decision.”

“This Supreme Court decision is the first ever to take a constitutional right away from Americans. This is a bleak day for our country. The Court has become a partisan body, overthrowing decades of precedent to advance a right-wing political agenda. This decision is the culmination of decades of efforts by the Republican Party to place one far-right ideologue after another on the Court. Elections have consequences. Tragically, American women are about to personally suffer those consequences.”

“I asked a bunch of people, including my daughter and her friends, words that they feel right now. And a couple of them resonated with me: disrespected, demoralized, outraged, despondent, scared and betrayed.”

“The fabric of our very democracy, the livelihood of our women, it all hangs by a fine thread. Today’s decision is telling an entire generation of women that their bodies are not their own, that our system will not protect them and that they are second-class citizens. And what a slap in the face to be told that we lacked the judgment to decide for ourselves.”

“I’m devastated that today, my daughter has less freedom than I did.”

The post What the overturning of Roe v. Wade means for Silicon Valley appeared first on San José Spotlight.