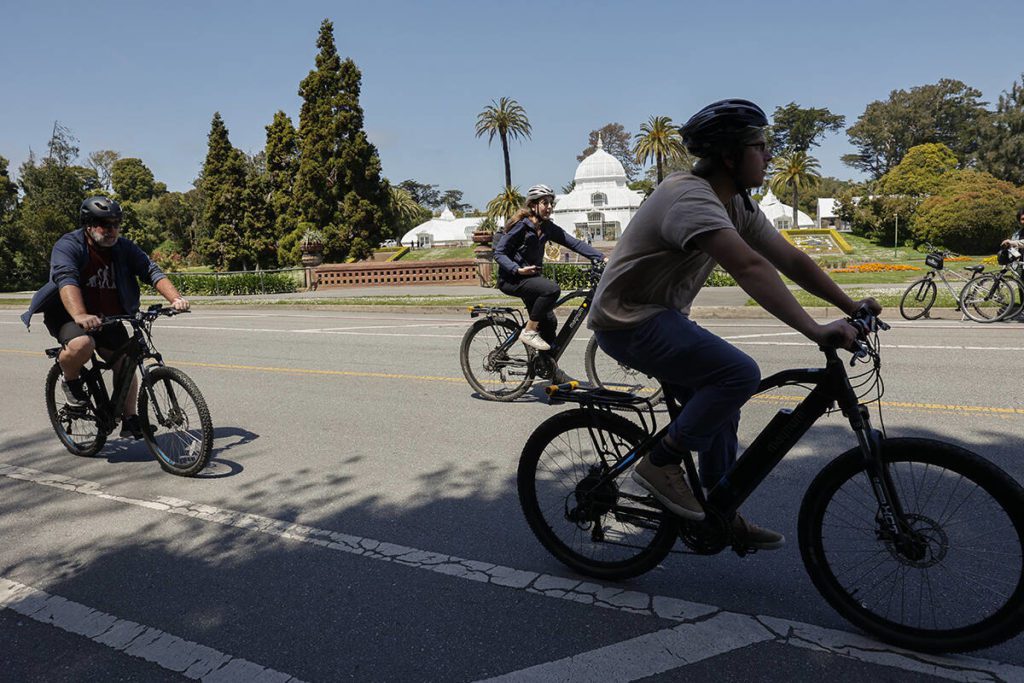 After a marathon hearing that featured more than 10 hours of impassioned public testimony, the Board of Supervisors hesitatingly agreed by a 7-4 vote Tuesday night to leave John F. Kennedy Drive in Golden Gate Park a safe haven for pedestrians and cyclists.

The board did so only after receiving assurances that The City would take action to improve access to the park, including by adding ADA-accessible parking spaces and increasing shuttle service to the park’s cultural amenities.

In a city roiled with a homelessness crisis and a drug overdose epidemic, the acrimonious debate over the future of a one-and-a-half-mile stretch of pavement in the heart of Golden Gate Park has played an outsized role in city politics.

The debate over whether to keep John F. Kennedy Drive permanently car-free has captured the fervor of transit activists and environmentalists who want to see the permanent closure of the street to cars. At the same time, it has drawn the passionate concern of disability rights groups and seniors who see the shutdown as exclusionary to those who rely on vehicles to get around The City.

Supervisor Shaman Walton also has criticized the proposal, going as far as calling it “recreational redlining,” arguing that the measure would sever park access for communities of color, and those who live in neighborhoods that lack sufficient public transportation, including those in the southeastern corner of The City.

Both sides of the debate called for a JFK Drive open “to all,” but disagreed on what “all” actually meant. Car-free JFK proponents argued that motor vehicles make the road less safe for pedestrians and cyclists, while detractors contended that the proposal would primarily benefit white people without disabilities.

Simple on its surface, the proposal quickly became factious and culminated in public testimony from scores of city residents during a public hearing on Tuesday.

“I think our city just makes everything a lightning rod,” said Marta Lindsey, communications director for the non-profit Walk San Francisco. “This is an issue that I think is actually pretty straightforward.”

In approving Breed’s legislation, the board punted on a proposal brought forward by Chan intended to forge a compromise between the two sides.

Chan proposed allowing one-way, westbound car access between Transverse Drive and 8th Avenue on a roadway shared with cyclists and pedestrians. She acknowledged Tuesday that her proposal wasn’t yet finalized or ready for a vote, but asked her colleagues to hold off on making a decision. Technically, it remains on the table.

The board amended Breed’s proposal to require the city to provide quarterly updates on its promises to improve access to the park in lieu of reopening JFK Drive to cars.

“It shouldn’t have taken a debate about JFK to make these things better, but it did,” Mar said, adding that the board could reconsider Chan’s compromise proposal if The City fails to meet its obligations.

This isn’t the first time this stretch of road has been at the center of a contentious debate over access, use and safety concerns. Since 1967, the road has been closed to cars on Sundays, but over the years, transit, bike and safety activists have agitated to extend the closure to Saturdays year-round.

The fight has long pitted the park’s museums, which say cars are necessary to access The City’s cultural center, against environmentalists and those calling for safer streets.

“Putting the two museums in the middle of the park has had some unintended consequences,” said Brian Wiedenmeier, the executive director of Friends of the Urban Forest. Unlike New York’s Metropolitan Museum of Art, which is situated close to subway lines, he said, the de Young and the California Academy of Sciences are in the middle of a park where public transit is scant.

It’s a fact that has continued to fuel the debate now that the pandemic has left the street’s identity and use case up for grabs. “We are at a point where we’re being asked as a city, are we able to take another leap of the civic imagination and imagine how this space could be used differently?” Wiedenmeier said.

The future of JFK Drive has also become a litmus test for The City’s environmental commitments as activists are quick to point out that eschewing cars for less carbon-intensive modes of transportation, including walking, biking and public transit is an integral part of The City’s climate goals.

“Twenty years ago, we made the case that this was a general environmental priority and a climate priority,” said Amandeep Jawa, a board member at the San Francisco League of Conservation Voters. “The time is long past that we should be debating this. …We’re in a mess, and we really quickly have got to convince people to get out of their cars and to take more active transportation, whether that’s public transportation or bicycles or even scooters and e-bikes.”

Although transportation emissions account for nearly half The City’s greenhouse gas emissions, the environmental benefit of removing cars from a single street is less clear. “I’m under no illusions that closing a mile-and-a-half of roadway to cars permanently is going to dramatically reduce the carbon emissions of our cities,” said Wiedenmeier. “But if we can’t do it here, how do we have any hope for the challenges that face us?”

To many who testified on Tuesday, the issue was not a matter of meeting climate goals, but of preserving access to gems like the de Young Museum and California Academy of Sciences.

A survey included in the analysis found that the frequency of park visits by residents of the three districts during the pandemic decreased from their pre-pandemic level, and many wished to visit the park more frequently.

However, the study concluded that equitable access to Golden Gate Park proved challenging before the pandemic, also, and that each of the three options – no closure, full closure, and one-way closure – could improve equitable access to the park with the proposed adjustments.

In the case of car-free JFK, the report found that access could be improved with the proposed addition of 28 ADA-accessible parking spots and several other changes, such as a park shuttle service that runs more frequently and on weekdays.

Walton commented that the study showed that access to the park has never been equitable, and argued that the JFK closure does nothing to change that.

“I really truly feel that Golden Gate Park should be reflective of the diversity that we brag about here in San Francisco, and that is not the case, and the study demonstrates that,” Walton said.

Several city residents of outlying neighborhoods, including many who spoke through an interpreter, warned that the closure would make it challenging for seniors and people with disabilities to visit Golden Gate Park.

“This is a sort of mini-war against the elderly and disabled,” said Frank Noto, representing the Golden Gate Heights Neighborhood Association.

Advocates for the return of cars to JFK Drive note that the park lost more than half of its free, ADA-accessible parking spaces when the road was closed off to cars.

Supervisor Dean Preston acknowledged the persistent disparities in access to the park but said they are best resolved through robust public transportation and the shuttle service within it.

But other supervisors remained skeptical of The City’s ability to follow through on proposed changes.

Leaders of the de Young Museum, which stands to permanently lose nearby parking spaces, have also openly opposed a car-free JFK.

“You own billions of dollars worth of art, it should be accessible to all,” said Thomas Patrick Campbell, director and chief executive of the Fine Arts Museums of San Francisco.

According to a report authored by the city’s Recreation and Parks Department, a majority of city residents live within 15 minutes of walking distance to a Muni line that offers direct service to Golden Gate Park.

Even with JFK Drive shut down to cars, about 83% of parking spots in Golden Gate Park remain accessible, according to The City.

Safety also played a key role in the debate. Numerous car-free advocates shared stories of being hit, or nearly hit, by vehicles on JFK Drive. But opponents of the proposal shared that they felt unsafe when parking far away from their destination.

The vote tally among supervisors reflected the proposal’s apparent popularity among city residents, according to city data.

An online survey conducted by The City last fall found that 70% of city residents supported JFK remaining a car-free promenade. That included majority support in people from every ethnic background, from every age group under 65, and from every city ZIP code but one. But Chan questioned the data and noted that a majority of those surveyed were white or did not have a disability.

This story has been updated to reflect that Supervisor Connie Chan’s proposal would allow one-way, westbound car access between 8th Avenue and Transverse Drive.