Making sense of the madness: The City’s redistricting process 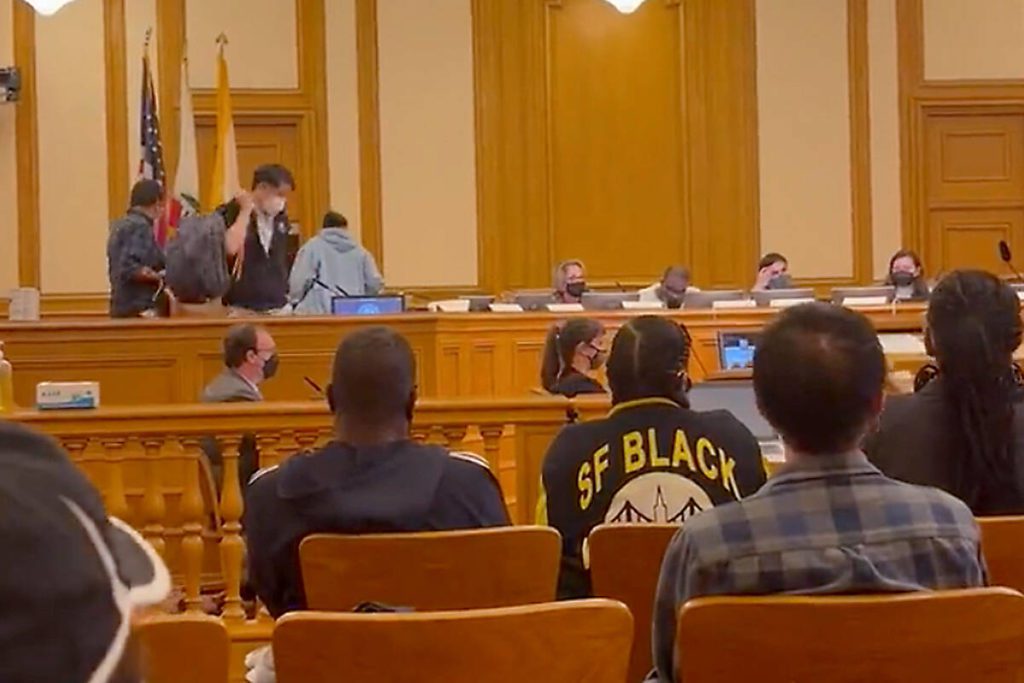 Maps, votes and even participation have changed during the San Francisco redistricting process, but two things have remained the same: Lengthy task force meetings and a flair for the dramatic.

This weekend, with just five of its nine members present, the city’s group appointed to redraw supervisorial district lines voted through a draft final map. This marked the last opportunity they’ll have to make any serious changes to what will become the city’s geographical guidebook for the next ten years.

Why was I seeing videos of San Francisco redistricting task force members walking out of their most recent meeting on social media?

Jeremy Lee, J. Michelle Pierce, Chema Hernández Gil and Raynell Cooper walked out of the meeting that began Saturday at 10 a.m. and ended just before 6 a.m. on Sunday, according to Mission Local. It was quite possibly a new record for the task force.

Lee, Pierce, Hernández Gil and Cooper — three Board of Supervisors appointees and one Elections Commission appointee — made the bold decision to leave the meeting upon the task force’s vice chair, Ditka Reiner, requesting a reversal of a prior decision. She stated she didn’t understand the initial vote. Reiner, before leaving to move her car for street sweeping with the rest of her peers, had begrudgingly approved a map that placed Potrero Hill in District 9 and Portola in District 10. Today, Potrero Hill sits in District 10 and Portola sits in District 9.

When the vote was called, the original action was reversed. This upset the four members in a new way, a way that made them feel like they had the rug pulled out from underneath them. One, Cooper, called into the meeting remotely and another, Hernández Gil, posted an official statement on Twitter.

“I believe this draft map has been carefully designed to systematically diminish the ability of many of the most marginalized San Franciscans from having fair and effective representation,” Hernández Gil went on to say Monday. “It is the result of weaponizing the Federal Voting Rights Act to pit vulnerable populations against one another, purposefully cracking their communities of interest while going out of its way to preserve the most stable neighborhoods.”

So we’re at a point in the process where we’ve pulled away from maps with numbers and letters, such as maps 4B and 4D. What is the final draft map?

The final draft map presents major adjustments from the current supervisorial map. Some changes include the Tenderloin being slated to sit in District 5 rather than District 6 and plucking Potrero Hill and Portola from their homes in District 9 and 10 in a jurisdictionally oriented wife swap, so to speak.

No district made it through unscathed, as shifting had to happen citywide in order to balance out the population sizes to meet redistricting rules. District 6, which has been a hotspot for San Francisco’s growth in recent years, has an abnormally large population that needs shrinking. As a result neighborhoods across the city will be redefined, regardless of what tweaks task force members make Monday and Wednesday.

How come foul words are being slung at task force members during every public comment session?

Many San Franciscans — including members of the task force — feel as though public input of many has been set aside for the political gain of few during the redistricting process.

Removing the Tenderloin from the area sometimes described as the Transgender Cultural District is a choice that the LGBTQIA+ community has showed up in droves to protest, especially in the last week.

Cutting Potrero Hill out of District 9 separates two boroughs of the city’s Black community from one another. This happened despite numerous requests from Black residents not to allow the move, as they felt it would dilute the voting power of their demographic.

The five aforementioned members of the Redistricting Task Force created and approved a draft map that I expect will not only be legally challenged if made final, but that will reduce the trust San Franciscans have in transparent government and our city’s commitment to the underrepresented,” Hernández Gil wrote.

Last week District 5 Supervisor Dean Preston was perfecting his use of the word “gerrymandering” on Twitter. Why has District 9 Supervisor Hillary Ronen taken up the same vocabulary?

Haney did not engage with Ronen’s post about “standing with the Black, Latinx, LGBTQ community against gerrymandering in San Francisco. However, when Haney issued a message encouraging the Elections Commission to leave the task force intact ahead of its hearing Friday, Ronen called Haney’s words “disgusting.” A few hours later, the commission offered praise of the work task force members had done and elected not to act, noting that both bodies were supposed to be independent.

“You used to stand with us before you decided to abandon your district in your first term,” she wrote. “Thought that wasn’t a betrayal because Honey Mahogany was going to win. Not with these gerrymandered districts you’re standing up for.”

To these fighting words, Haney responded with three question marks. He later elaborated.

“I don’t support the draft map currently under consideration. I want to see the Tenderloin and SoMa stay together in D6, I’ve been very clear about that. But the process is ongoing, & removing 3 appointees on the eve of the final vote after months of service is not something I support,” he said.

“Matt, are you really starting to believe your own bullshit or is this just more bullshit?” Ronen rounded out the conversation.

Here’s a question we’ve posed before: Why does redistricting matter?

When speaking to keeping their communities of interest together, many populations have pointed to their voting record. There’s a history of putting Black residents in office in District 10. District 8 is the only one to regularly turn out LGBTQIA+ politicians in the city.

These communities have created representation. The passion and pride that stem from that representation have poured over into public comment for days on end. This is why the city’s charter, in addition to many other laws, encourages keeping communities together.