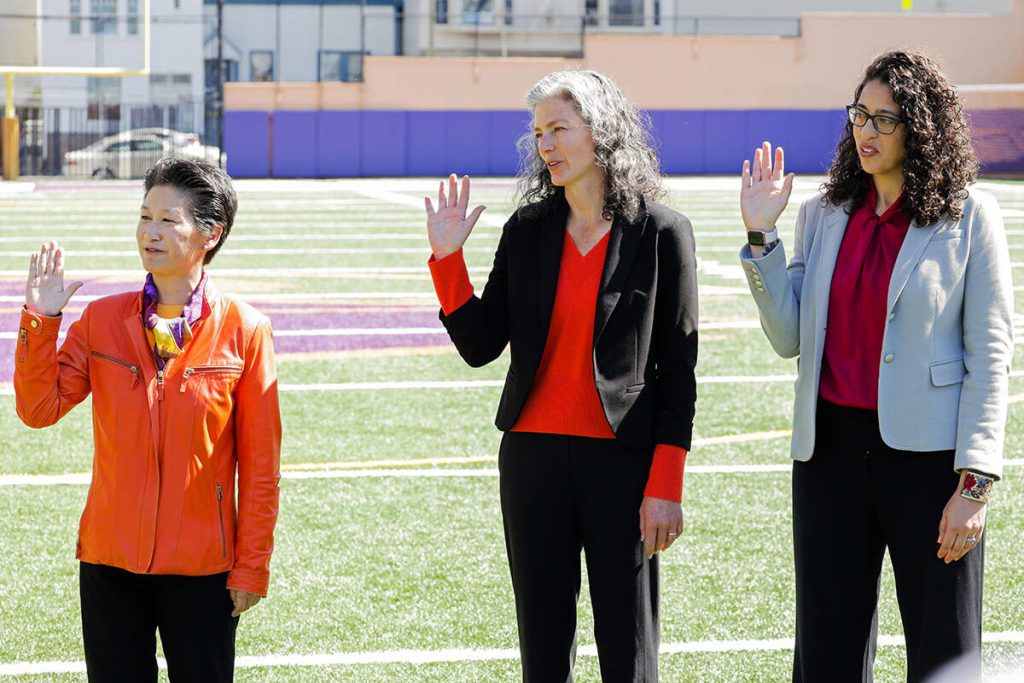 Disaffected parents led the ouster of three San Francisco school board members last month, and now they’ll be tasked with leading the district through a litany of challenges.

Although the appointees have mixed professional and personal backgrounds, all are parents of current students in the district.

The appointments are a significant decision for Breed, who supported the recall amid widespread frustration over the school board’s focus on issues such as renaming schools and its perceived lack of attention to reopening schools for in-person learning during the pandemic.

“This is the hardest decision I’ve ever had to make as a mayor,” Breed said.

The mayor made the announcement amid a jubilant atmosphere at the sun-soaked athletic field of Galileo Academy of Science and Technology, which she attended as a student.

The mood hardly hinted at the contentious nature of the year-long recall process.

The fierce fight once again drew national attention toward San Francisco politics in the weeks leading up to the vote, but ended in a landslide victory for recall proponents. More than two-thirds of voters agreed to boot each of the three board members.

On Friday, the recall effort’s leaders made clear they’re looking to the future.

“We are turning a new page. All of us want what’s best for our children,” Hsu said.

Board of Education Commissioner Kevine Boggess echoed that sentiment, saying the board’s primary task is now to “rebuild the trust of the public and the school community.”

“There is a new urgency,” Boggess said. “The recall showed the public lost faith in us and we need to rebuild it. I hope we can put all the politics and anger aside and do what is best for kids.”

The new board members will hold their seats until January, when the terms of the recalled members were set to expire.

Breed stressed that her decision was made after countless discussions with parents and residents that began before the recall of former Board President Gabriela López, Vice President Faauuga Moliga and Commissioner Alison Collins.

“As we emerge from this pandemic, we need to focus on delivering on the basic services our residents deserve, and I know these three women will be intensely focused on meeting the urgent needs of our kids and our schools, while also focusing on the long-term health of our public school system,” Breed said in a statement.

The mayor highlighted the diversity in her choices.

A leader of the recall effort, Hsu is the president of the Parent Teacher Student Association at Galileo Academy, which her twin children attend.

Breed touted Hsu’s strong ties to The City’s Chinese community. Born in China, Hsu arrived in the United States more than 40 years ago and is now a resident of the Richmond District. In addition to leading Galileo PTSA, she serves as the chairperson of the district’s Independent Citizens’ Bond Oversight Committee.

Like Hsu, Motamedi has played an active role in The City’s school system, serving as co-chair of the Public Education Enrichment Fund Committee. Breed described her as a “quiet force.”

Weissman-Ward is the associate director of the Immigrants’ Rights Clinic at Stanford Law School, where she is now a lecturer after working as an immigration attorney for a private law firm. She was educated in public schools and lives in the Mission District.

Motamedi and Hsu actively campaigned for a seat on the board in the wake of the recall and submitted candidate applications to Recall School Board Members Lopez, Collins & Moliga, the political action committee that spearheaded the recall.

Motamedi’s father was an Iranian immigrant and her mother and stepfather were longtime public school teachers in Los Angeles. She is the mother of two children in San Francisco public schools.

The City’s public schools face declining enrollment, which exacerbates the financial woes that may prompt a state takeover of the district. The district reported in fall it had lost 3,499 students in the past years, placing about $35 million of state funding in jeopardy.

The newly shaped school board will be tasked with addressing the district’s $125 million deficit, as well as finding a replacement for Superintendent Vincent Matthews, who announced he will retire at the end of the school year.

“Our priorities have to be focused on the superintendent’s search and dealing with the budget deficit and making sure teachers and staff are getting their paychecks,” Weissman-Ward said.

In addressing the budget deficit, Motamedi argued the district is designed to serve 70,000 students but only has 50,000. Therefore, she said, the district is pouring resources into maintaining buildings rather than into staff and students.

Hsu answered the same question by saying she would first need to analyze the district’s budget.

“I will take the approach of learning about how the budget is done and learning from the staff,” Hsu pledged on Friday.

The board members also will play a key role in deciding the fate of the admissions policy at Lowell High School. Amid much controversy, the previous iteration of the board voted to permanently end the school’s merit-based system, opting for a lottery instead.

In a candidate questionnaire, Hsu and Motamedi supported returning merit-based admissions to Lowell.