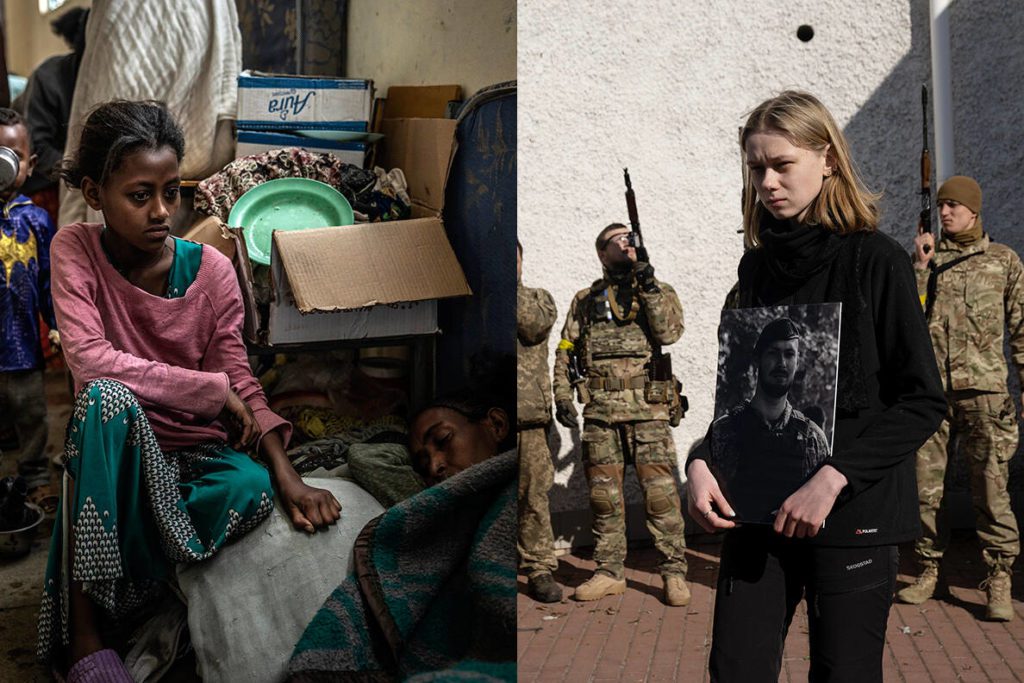 The other evening I stumbled upon a Twitter debate over whether it was “too soon” for a Trevor Noah monologue calling out television news coverage of the war in Ukraine as “racist.” The segment featured a super cut of white correspondents noting how “European” and “like us” the Ukrainians are compared to the besieged and suffering in places like the Middle East and Africa, where this sort of thing — war, fleeing refugees — is more expected.

Noah’s segment featured what may be the most notorious of many such examples, CBS reporter in Kyiv Charlie D’Agata saying, “This is a relatively civilized, relatively European — I have to choose those words carefully, too — city where you wouldn’t expect that or hope that it’s going to happen.”

D’Agata, who has since apologized for the viral statement, was one of many in the news media and in politics framing the invasion as something that isn’t supposed to happen to “Europeans,” “people with blue eyes and blond hair,” “people that you would live next door to.”

Noah reminded his viewers that war is “Europe’s thing,” referring to WWI and WWII and the Hundred Years’ War. He lampooned the offensive absurdity of positing that war is alien to predominantly white, “relatively civilized” countries.

In other parts of the mediascape, journalists of color also have been condemning coverage that seems to presume that war is for colored people. AMEJA, the Arab and Middle Eastern Journalists Association, issued a statement that read in part:

“Newsrooms must not make comparisons that weigh the significance or imply justification of one conflict over another — civilian casualties and displacement in other countries are equally as abhorrent as they are in Ukraine.

AMEJA stands in full solidarity with all civilians under military assault in any part of the world, and we deplore the difference in news coverage of people in one country versus another. Not only can such coverage decontextualize conflicts, but it contributes to the erasure of populations around the world who continue to experience violent occupation and aggression.”

To be clear, the problem is with the coverage, not with the Ukrainian people or those who support them in their fight to save their sovereign nation and their very lives. Noah’s YouTube page includes a fundraising link for aid for Ukraine. AMEJA stands with them. So do I and millions of people around the world. But it can be hard for those with ties to other war-torn and devastated countries to see the plights of their people abandoned when new international crises arise, as in Afghanistan, or ignored, as in Ethiopia.

Jerusalem Makonnen grew up in Ethiopia and has made her home in the East Bay for many decades. Her sister and other family are still in Ethiopia, a country almost three times the size of Ukraine, where 2 million refugees have left and thousands have died during more than a year of civil war and famine.

She is sympathetic to the Ukrainians, particularly the women and children. “It’s sad that this small nation that has been independent so long is about to be annexed,” she said. “I grew up during the time the Russians were in Ethiopia. It’s one of the reasons Ethiopians are all over the world.”

Although there’s not a direct comparison, Makonnen sees overlaps between Russia’s war on Ukraine and the civil war in Ethiopia — conflicts among people with shared roots, leaders who have had to call upon civilians to arm themselves and fight, brave people who love their countries.

As the civil war in Ethiopia worsened and Ethiopians in big cities around the United States held demonstrations, she kept waiting for some kind of wider solidarity for Ethiopia to catch on here. “Where’s the red and the gold and the green?” she said, referring to the colors of the Ethiopian flag. Noting that the conflicts in Ethiopia are “complicated,” she said, “I don’t expect the U.S. to be informed on stuff that happens outside of the U.S. and Europe, but it doesn’t mean that I don’t feel the emptiness.”

Makonnen recognizes Americans are more familiar with the countries of Europe than of Africa, which is often spoken of as a country and not a continent and often assumed to always be at war. “There is racial bias,” she said. “There’s this whole hierarchy: Europeans, Middle Easterners and then at the bottom, the Black people.”

We commiserated over feeling disappointed but not really surprised when news broke that African students trying to flee Ukraine were being turned back at the border. Seeing Haitian immigrants chased by U.S. Immigration and Customs Enforcement agents on horseback last year stunned both of us. Our “us” includes these people, too.

Sometimes the pain of Black and brown people does break through the media noise. Remember the Menlo Park couple who started an online fundraiser to aid the parents and children the Trump administration were separating at the Mexican border? Their goal was $1,500 and within about a week they had raised $20 million from people moved by scenes of suffering children from Latin America. People on every continent rose up in solidarity with the Black Lives Matter movement after millions of Americans took to the streets and the video of the lynching of George Floyd went viral.

It wasn’t ethical or even necessary for news outlets to make such a big event of white peril in covering the war in Ukraine. The images — and the stories the people themselves are sharing — show us who they are. Good reporters — and savvy amateurs on social media — transmitted the humanity of the border families, the BLM families and, now, the Ukrainian families in ways that draw our attention to the realities of strangers’ existences.

In each of these spaces, we have the chance to witness grace. Recently on television, I saw a young Ukrainian man who had sent his wife and two young children out of the country and was still trying to convince his father in Russia that the war is real and Vladimir Putin is lying. At the end of the interview, when he asked NATO to establish a no-fly zone, he had the most beautiful smile, like his whole heart was in his eyes. There are people like him in Ethiopia and Afghanistan, too, if only there are reporters willing to find them.

A white colleague of mine, sociologist Joshua Gamson, said he was hopeful that witnessing an unprovoked invasion by Putin, and seeing white people fleeing Russian forces, might be a “wake-up call” for at least some Americans “who have been entertained, complacent or supportive of (Donald) Trump and Trumpism, or who just thought it couldn’t happen here.”

His tentative hope is that they “might now see that this is no game, that the end result of Trump’s authoritarian impulses could plausibly be very similar to what we’re seeing in Ukraine.” Gamson added that for many white people, he suspects, the familiar whiteness of most of the Ukrainians they see in the war coverage likely makes it easier for them to imagine the possibility of a similar thing happening here, and to feel the stakes.

I confess my not uncommon American self-absorption: For most of my life, it was easy to feel superior to the rest of the world when it came to stuff like elections and democracy and science because we sent our people to tell other countries what’s what. I own my ignorance and inattention. But then the Tea Party sprouted like a plague of boils and all of the little hairline cracks I’d ignored started splitting into gaping fissures. The Jan. 6 insurrection and the toxic half life of its attendant lies killed the remnants of any fairy tale that the United States was different and better.

We’re broken, too. It’s not all that hard to look at white Ukrainians huddling in bunkers under their apartment buildings and not imagine how that could play out here. But I’m with Makonnen and her people, too: I want all of us also to be able to see ourselves in the African students trying to leave Ukraine and the Ethiopians fighting to save their country, too.