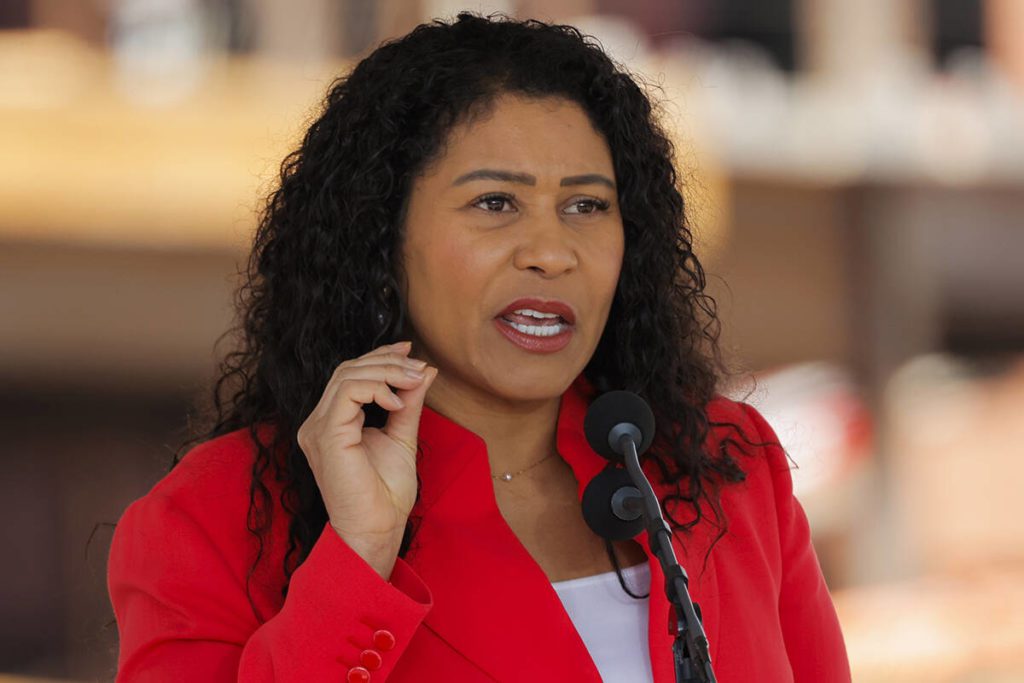 Mayor London Breed delivered a message Wednesday to those who believe San Francisco is dying: look behind her.

Breed spoke over the din of construction in Mission Bay, on a lot undergoing a transformation into eight acres of open space and more than 1,000 apartments. It’s just one development in a cluster in what was once a strip of land along the waterfront.

“This doesn’t happen in a city that’s dying; it happens in a city that is growing and thriving,” Breed said during her annual State of The City address.

The mayor used her State of The City speech to counter the persistent narrative in conservative media outlets that San Francisco is a crime-ridden city from which people and businesses are fleeing.

She described San Francisco instead as a city that has weathered the challenges of the COVID-19 pandemic better than its peers, a bastion of progressive values and poised for continued growth.

“Too many people across this city don’t feel safe,” Breed said.

She rejected the notion that public safety could be addressed without police, and noted that the San Francisco Police Department’s staffing is at a “crisis level,” short 540 police officers of what a city-commissioned study claimed is needed.

“We simply do not have the police staffing to meet the needs of a major city,” Breed said.

She credited The City’s police department with embracing reform, diversifying its ranks and decreasing its use of force. But while she defended police, Breed did not point to law enforcement as the cure to The City’s ailments.

She touted community investments like the Dream Keeper Initiative, which launched last year and aims to address racial disparities with $60 million commitment this fiscal year to The City’s Black communities.

Such programs focus on the root causes of crime, which Breed said point back to poverty.

“Let’s be the national model for reform, for alternatives and for safety,” Breed said. “We can do it all, and we don’t have to choose.”

Breed declared a state of emergency in the Tenderloin in December amid a surge in fentanyl use and overdose deaths.

The emergency declaration allowed The City to quickly open the Tenderloin Linkage Center, which aims to connect people with myriad social services, like drug addiction treatment, and offer access to basic human necessities, like showers.

The swift opening of the linkage center was coupled by the mayor with a promise to crack down on illicit and illegal activity in the Tenderloin.

Breed touted The City’s expansion of shelter and housing for the homeless since 2018, and on pace to exceed its goal of 1,500 new units of permanent supportive housing. She said she would push legislators to reform mental health laws that limit when a person can be forced into treatment.

“I’m done arguing if it’s OK for people to remain on the streets when we have a place for them to go, because it is not. It just isn’t,” Breed said.

On the housing front, Breed acknowledged that The City has fallen short of her goal of 5,000 new housing units in both 2020 and 2021. She lamented that much of The City’s new housing has come in the form of major projects like those she stood in front of on Wednesday.

Families and working people need housing of all sizes in a variety of neighborhoods, and one way to accomplish that, Breed argued, is for voters to support her proposal to streamline the review process for certain housing projects.

The proposal, which will come in the form of a charter amendment on the November ballot, has been rebuffed by the Board of Supervisors.

Breed also noted she’ll be responsible for appointing replacements for the three school board members recalled last month, which she supported. She didn’t indicate who she’ll pick, but did describe the recall as a strong signal from voters to focus on “the basics.”

Despite the litany of challenges The City faces, Breed struck a decidedly hopeful tone.

The City — which navigated the pandemic with a relatively low death rate and high vaccination rate — has lifted its mask mandate and vaccine requirements for indoor businesses.

Despite lethargic applause when she mentioned The City’s reopening, she insisted, “I look forward to going to a club to have a good time — without my mask,” Breed said. “It’s time.”