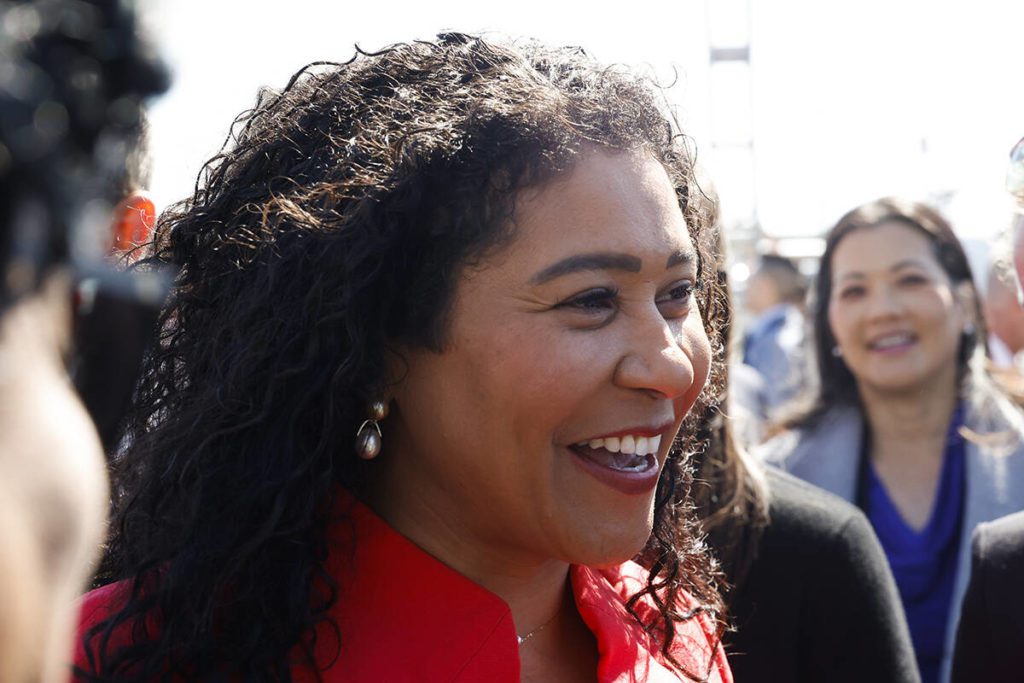 London Breed delivered her “On the Waterfront” address Wednesday, painting a rosy picture of San Francisco’s resurgence against a backdrop of Mission Bay construction.

Housing. Investment. Rebirth. She repeatedly referred to our eastern shoreline as a symbol of hope, contrasted against pandemic despair.

You have to hand it to Breed, who wowed a who’s who of local poobahs in her annual State of The City speech, hitting on all the right themes and inspiring the crowd. (Even hardened hacks like me.) She’s a gifted speaker. And for a second there, it sure felt like everything’s gonna be alright.

And, who knows? Maybe it will.

Breed’s riding a wave of political goodwill, for a change, and she is clearly tacking to the center-left in her mindset and rhetoric, telling the invite-only gathering, “As we look ahead to the decisions about where to take this city, we need to listen to our residents. Last month, the voters of this city sent a very clear message.”

They sure did. The overwhelming recall of three very progressive school board members sent an abundantly clear message to City Hall. And Breed was clearly listening.

“They sent a message that we must do better by our children,” Breed continued. “But they also sent a message that while big ideas are important, those ideas must be built on a solid foundation. On the basics … like a well-run school system … like a government that delivers essential services … like accountability and competence.”

Now you’re talking Herhonor. So, who do you have lined up to do all that?

Mayor London Breed chose Mission Bay as the site to deliver her State of The City address to San Francisco’s movers and shakers. (Craig Lee/The Examiner)

Breed gave plenty of lip service to public safety issues facing San Francisco, highlighting the scary staffing crisis at the SFPD, with Chief William Scott sitting right there. To hear Breed tell it, The City has 1,630 active police officers, which is 250 fewer than we had three years ago. The current staffing remains 540 cops short of what’s needed, according to a recent independent analysis.

So, that’s where Breed’s rose-colored glasses get a little foggy. Public safety begets confidence, which begets engagement, which begets prosperity. If you miss that first step, you’re not climbing out of anything.

“Right now, too many people across this city don’t feel safe,” said Breed. “Asian seniors are fearful of leaving their homes. Tenderloin families are being victimized by drug dealers, disruptive behavior and violence. Bayview families living with random gunfire. Homeowners are fortifying their garages after yet another break-in. Small business owners are sweeping up broken glass and painting over graffiti on a regular basis.

“These are complicated problems, with twisted roots that reach well below surface-level solutions. But, again, we have the tools to deliver both the basics and the big ideas. First, we need law enforcement. To keep people safe. To make arrests. To hold people accountable. And to support victims.”

You could practically hear District Attorney Chesa Boudin sweating in the crowd.

Kidding aside, Breed’s vision sounds great, but will be tough to carry out. The mayor is saying what the people of San Francisco want to hear. But will she be able to deliver? She adroitly pointed out that it starts by getting new recruits into the police academy, where we can grow a new generation of law enforcement that can keep the peace while maintaining the spirit of reform.

But she also promised a larger police presence in the Tenderloin in December, to much political acclaim. So far, not much has changed there. Like I said, no safety, no economic rebound.

Which brings us to The Great Return, another key element of Breed’s speech and a growing phenomenon this week. You could feel it in the streets downtown and the BART cars underground. The trickling creek of returning workers growing into a steady stream.

I saw it with my own eyes at City Hall Tuesday, stopping in to see the first open Board of Supervisors meeting in two years. It was still painfully boring, but the body’s president Shamann Walton told me before Breed’s speech: “It was just great to see everyone back together again.” He almost made me believe the supes were happy to see each other again.

I saw it over in Union Square, stopping by a ribbon-cutting ceremony for the refurbished Hotel Stratford on Powell Street. Business leaders like Rodney Fong, from the Chamber of Commerce, sounded expectedly bullish.

“We’ve been calling for the return to the office,” said Fong. “And so many of our member companies, from Wells Fargo Bank to JP Morgan Chase to Google, are making commitments this month to come back to San Francisco and come back to the office. We’re starting to feel it on the streets here in San Francisco.”

Joe D’Alessandro of S.F. Travel had a more sobering perspective.

“It’s going to take a while for us honestly,” he said. “We’re seeing hotel occupancy start to increase. We’re seeing airlines reinstate service in SFO, especially international carriers. But San Francisco was hit harder than any other major city in the country in terms of visitors during the pandemic, simply because we rely on international travelers. But we’re optimistic and we’re seeing the sparks right now of the return starting to happen.

It’s clear Breed’s picking up what the biz leaders are putting down.

“For too long, we took our economic success for granted. We assumed that the offices would be filled, that the conventions would all come to town and that the taxes would stream in,” said Breed in her speech. “When I put out the call to businesses about committing to bring workers back into the office, so many answered. They are investing and returning.

Preach it Mayor Breed. And remember: It’s inspiring to hear a talented politician talk. It’s even more inspiring to see them do.

Editor’s note: The Arena, a column from The Examiner’s Al Saracevic. explores San Francisco’s playing field, from politics and technology to sports and culture. Send your tips, quips and quotes to asaracevic@sfexaminer.com.