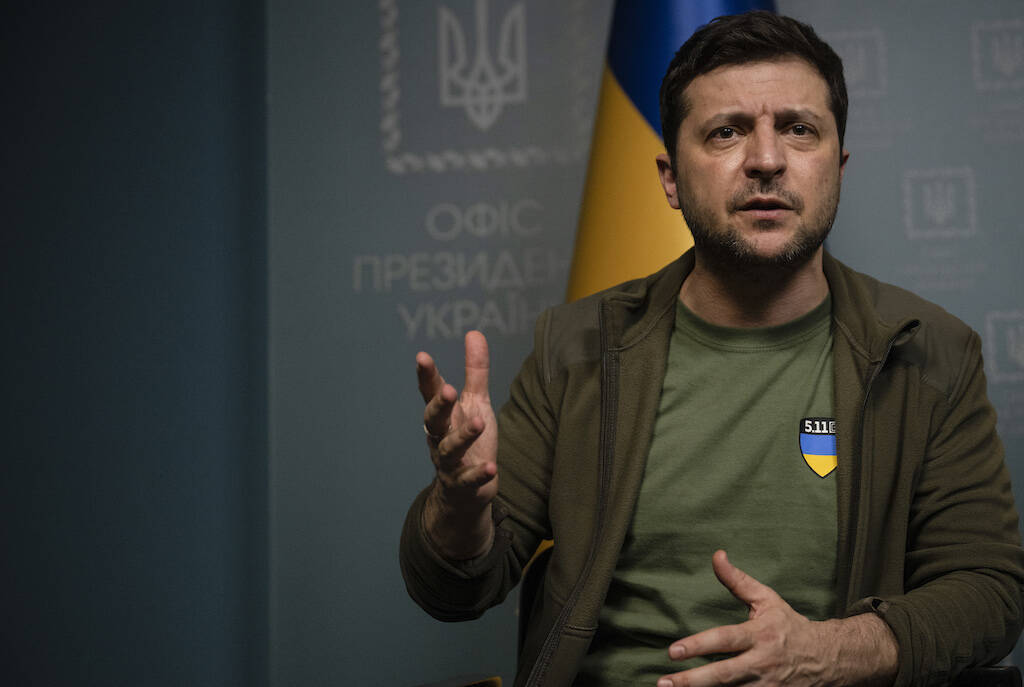 Ukrainian President Volodymyr Zelensky came to America a few months back to cajole and plead for support — both military and political. He saw the storm coming. It is now a Putin-driven hailstorm of rockets and bullets raining down on cities and civilians. Urban residents have gone from sheltering-in-place against COVID to picking up arms to fight in the streets. Europe is again embroiled in a war that will not end all wars.

San Francisco feels a million miles away from today’s shooting and mayhem. Yet when Zelensky came to visit President Biden in September, he made a pilgrimage to America’s largest Ukrainian community: California. He gave a critical speech warning of Russia’s intentions at Stanford’s FSI center, the academic home of Mike McFaul, the former U.S. ambassador to Russia.

Zelensky then jumped in a car and headed to Mountain View to visit the Adjutant General David S. Baldwin, to review the California National Guard at Moffett Field. I was there for much of Zelensky’s time with my wife, Lt. Governor Eleni Kounalakis, and felt both the urgency of Zelensky’s appeal and his ability to cajole and convince his hosts for the material support that the last presidential administration held hostage.

Looking back at Zelensky’s visit, I vividly recall F-15 fighter pilot Colonel Robert “Tigger” Swertfager talking with the president about his time in Ukraine, as part of a cycling contingent of California National Guard who have trained with Ukrainians both here and in-country since 1993. The airman had maintained close personal ties with his Ukrainian pilot friends — there may have been drinking involved — and spoke of both their daring and the danger they faced. He then reached up to his shoulder and ripped from his flight suit a special patch, handing it to Zelensky.

The Ukrainian President touched the unique patch to his heart and said he would carry it with him always. When I see Zelensky now in an online video or sandbag-backed press conference, I think of the patch that likely is in his pocket. If the order comes, the California aviator would be among the first to enforce a no-fly zone over Ukraine. A no-fly zone over Ukraine, however, runs the risk of a wider war — one that would evolve into a Russia-NATO conflict and might trigger the use of tactical nuclear weapons that are at Putin’s fingertips.

Anyone watching the war on cable news channels knows that it is both far away and very close. We feel the immediacy; we are pained by the suffering of innocents. Eating dinner while viewing the growing stream of fleeing refugees to Poland and other bordering countries makes us feel grateful for our own peace and prosperity.

The juxtaposition of war abroad and peace at home creates for a schizophrenic present, for cognitive dissonance. America just pulled out of its longest war in Afghanistan — a war that was mostly out of sight and, for both citizens and political leaders, is now out of mind.

Ukraine is different. Not because it is a war against white Europeans who are dominantly Christians. It is different because it is being attacked by Putin’s Evil Empire. He has sent the equivalent of the Death Star to descend on Kyiv, and the rebel forces are outnumbered and outgunned. But they are not out of luck or pluck; they are standing their ground.

The Taliban was outgunned and outmanned, too, but the U.S. was not going to enter into World War III to oppose the Taliban. Also, nuclear conflagration from Afghanistan was never a threat. Putin, on the other hand, is ready to pull the nuclear trigger.

Wars of this magnitude and consequence used to require significant citizen sacrifice. Gas going up 26 cents a gallon is an annoyance, but does not qualify as broad societal hardship. There are a few who recognize the gravity of the moment and have shipped off to Ukraine to fight in the International Brigade, a ragtag fighting force reminiscent of the American Lincoln Brigade that went to fight in the Spanish Civil War (for a refresher, read Hemingway).

How this war ends is unclear. Ideally, Russians rise up to remove their dangerous leader, who is in his 22nd year in power. As Putin walks through his gilded Kremlin corridors, he has become increasingly isolated and paranoid, aware that his future holds only three options: 1) power, 2) prison or 3) death.

What can San Franciscans do? Lifelong Giants fans know how to root for an underdog. San Franciscans are showing blue and gold flag Zoom backdrops, sending aid and demonstrating publicly. We are rooting for Ukrainians, rooting for Zelensky. Because a loss for Ukraine will bring darkness to all, delivering a temporary but significant blow to freedom and democracy.

Putin knows Zelensky symbolizes hope and freedom and will do everything in his power to destroy him. Zelensky’s survival means that democracy has another day of life. America is using sanctions and other tools short of direct confrontation with Russia or no-fly zones to save the nation. It must do everything it can to help President Zelensky and the people of Ukraine.

Markos Kounalakis is author of “Freedom Isn’t Free: The Price of World Order” (Anthem, 2022) and a visiting fellow at the Hoover Institution.