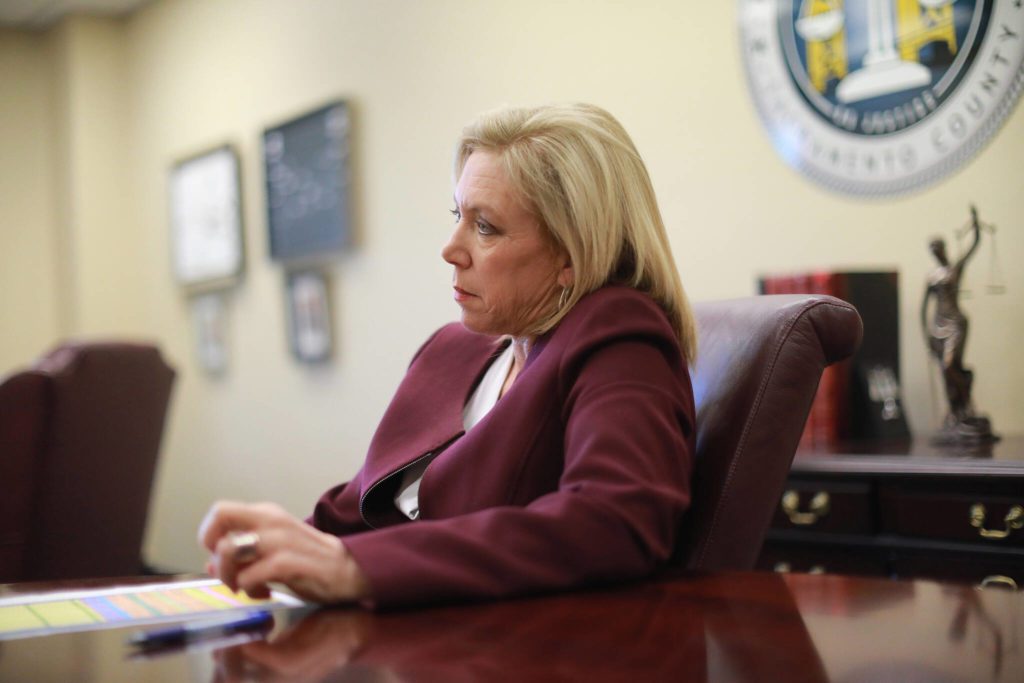 Smiley Allen Martin led a life of violent crime for years before becoming a suspect in the recent Sacramento shooting that killed six people. Exactly why the 27-year-old was allegedly on the streets with an automatic weapon instead of behind bars has become the subject of a political blame game in the tragedy’s aftermath.

Sacramento County District Attorney Anne Marie Schubert, a former Republican running for California attorney general as an independent, rushed to blame criminal justice reform. The truth, however, contradicts Schubert’s talking points and raises questions about her own failure to fully prosecute a 2017 case in which Martin violently assaulted a woman.

“Martin pleaded no contest and was sent to prison on charges of corporal injury and assault likely to cause great bodily injury in January 2018 under a plea deal in which prosecutors dismissed charges of kidnapping — considered a violent felony — and intimidating a witness or victim,” reported the Associated Press.

Plea deal? Dismissed charges? If this had happened in San Francisco or Los Angeles, critics would be roasting District Attorneys Chesa Boudin and George Gascón for leniency. Yet there’s been little criticism over Schubert’s decision to drop a felony kidnapping charge that might have lengthened Martin’s prison sentence.

An August 2017 filing by the Sacramento DA’s office lists the kidnapping charge as Count One. It alleges that Martin “did unlawfully, forcibly and by instilling fear, steal, take, hold, detain and arrest [victim’s name redacted] in Sacramento County, California, and did take the said [redacted] into another country, state, county and another part of Sacramento County.”

It also notes that the crime would count as another violent “strike” under state law.

Martin broke into a house, beat a woman bloody, abducted her in a car and assaulted her with a belt. So why did Schubert let him off the hook? Her office did not respond to questions about the decision to dismiss the kidnapping charge.

DA Boudin, however, took the time to explain the challenges facing prosecutors in such cases.

“In the millions of cases that are processed across this country every year, 95-plus percent of them get resolved through some kind of negotiated disposition, and there are lots of reasons for that,” Boudin said. “First and foremost among them: We simply do not have the resources to take every single case to trial.”

Boudin said in certain types of cases, like domestic violence and pimping, it’s not uncommon for victims or witnesses to refuse to cooperate with prosecutors.

“In those cases, what we do – and what most prosecutors do – is we evaluate whether or not we can prove the charges without the victim,” Boudin said.

Boudin’s office faced withering criticism last year for not prosecuting a felony domestic violence case in which the DA’s office said the victim refused to cooperate. The suspect in that case, Joseph Williams, was later arrested for killing a child.

“Domestic violence is a crime against the state of California, and the district attorney’s job is to work with what the Police Department has gathered at the crime scene and develop the evidence to present a case,” Kathy Black, an advocate for domestic violence victims, told the San Francisco Chronicle’s Heather Knight. “That’s his job – it’s not the victim’s job.”

“It’s true that such a lack of cooperation can make proving a case more difficult, but it certainly doesn’t make it impossible,” wrote Knight.

Yet Boudin is not the only DA dismissing charges or making plea deals in these cases. Schubert dropped the most serious charge against Martin after he apparently intimidated the victim out of cooperating.

“While incarcerated awaiting trial, he was recorded on jail calls instructing R. Doe how to testify,” wrote Anita Chabria of the Los Angeles Times, using an alias to protect the victim’s identity. “On the stand, she denied his involvement and said she didn’t recall the injuries, and was dating Smiley Martin. He pleaded his case down and was sentenced to five years, which was doubled to 10 years because of a prior ‘strike’ offense of robbery of a Walmart in 2013.”

Can a prosecutor pursue charges despite a victim’s lack of cooperation?

“You can, but you have to pick and choose,” said Boudin, noting that it can be much harder to win a conviction without victim testimony. “You can’t do that in every case. There’s not enough resources, courtrooms … not enough lawyers, not enough police officers to be on standby to testify.”

Despite Schubert’s regular attacks on him, Boudin declined to return the favor.

“There was some deal negotiated … that’s a normal part of what happens in the criminal courthouse,” he said. “What’s problematic is when people like her politicize other decisions made in other counties … when they’re doing the same thing.”

On Wednesday, the recall campaign against Boudin released an ad attacking his record on domestic violence prosecutions. Two of the recall’s billionaire backers, William Oberndorf and David Sacks, also support Schubert’s attorney general campaign. Perhaps they don’t know that crime has risen more in Sacramento than in San Francisco and that Schubert’s office regularly makes plea deals with criminals.

“I’m no fan of Chesa Boudin or George Gascón … I believe they should both be recalled,” said Early. “Schubert shouldn’t be hiding behind those two because her record is perhaps at least as bad as both their records.”

Early said Schubert should have prosecuted Martin for kidnapping.

“They should not have entered that plea deal,” Early said. “They should have pressed forward with the felony kidnapping, and this fellow Smiley would still be locked up.”

It’s not yet clear what, if any, role Martin had in the shooting. This has not prevented Schubert and others from trying to weaponize his story against Democrats, with plenty of help from certain reporters who swing at every pitch the supposed “lock em’ up” politicians toss their way.

Many of Schubert’s early claims about the case have been debunked. This should damage her credibility and provide a cautionary tale about the dangers of rushing to publish dishonest “copaganda.” It should also inspire California’s mostly-white newsrooms to examine their own prejudices toward criminal justice reform.

Schubert is quick to talk tough and cast blame, but when you examine the facts, she’s not so different from Boudin. Instead of giving her a platform to attack others, let’s question whether she can withstand her own “tough on crime” critique.

“Crime and homelessness have gone through the roof in Sacramento on Schubert’s watch,” said Early, unleashing a line of attack often used against Democrats. “It’s time to stop Schubert from failing upwards. If your policies have not led to the lowering of crime in Sacramento, please don’t go and take the most important law enforcement job in the state. Stay in Sacramento and make things better in Sacramento before you take your failures statewide.”