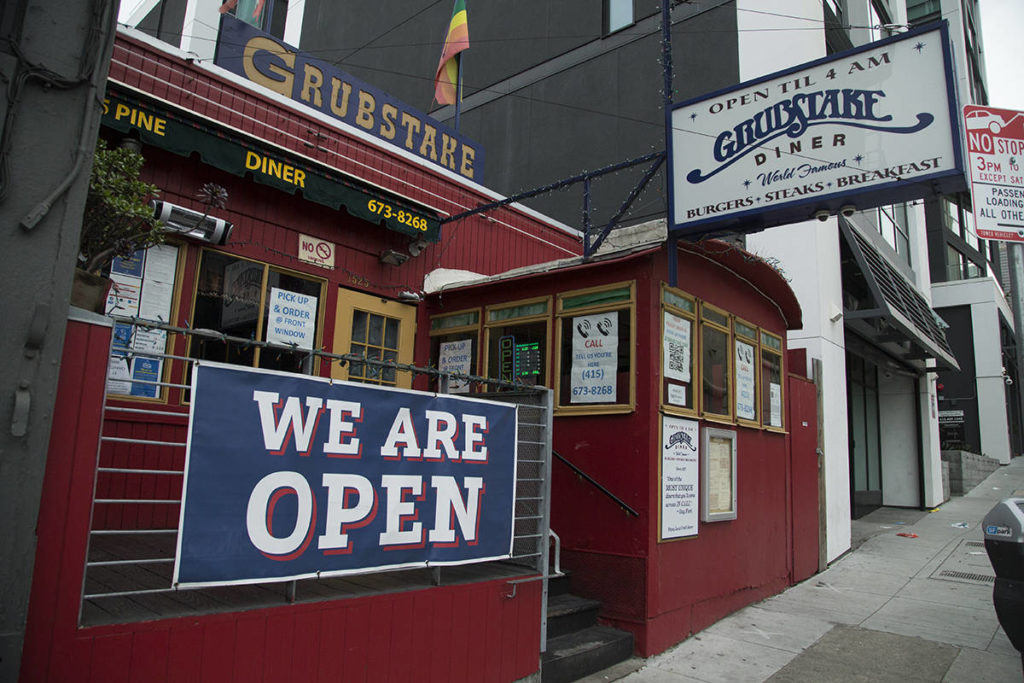 Revised plans to erect an eight-story mixed-use building at the Grubstake Diner site on Pine Street will be considered during this week’s Planning Commission meeting.

Grubstake Diner has operated at 1525 Pine St. between Polk and Van Ness since the 1960s, and a diner has been operating at the site for over 100 years. Plans to demolish the one-story building and construct a new development with housing and a ground-floor restaurant have been in the works for over six years.

In January, Planning Commission staff issued a finding that the proposed project, which would include 21 units on top of a rebuilt, larger diner, would not have adverse environmental impacts. That staff finding was appealed in February, on grounds including the historic significance of the building, which is part of the Polk Gulch LGBTQ Historic District.

However, staff are defending the preliminary mitigated negative declaration that the demolition of the diner and construction of the new building would not adversely impact the neighboring environment.

The Grubstake Diner has cultural significance the Polk Gulch area, because it, along with other bars, night clubs and restaurants, welcomed LGBTQ patrons in the 1960s when other places shunned them. Yet the building it’s in has not been identified as a historical resource, and the diner will return when the new building is constructed. Plans call for it to increase from its 1,661-square-foot footprint to more than 2,900 square feet, with a modern kitchen and two small dining areas.

While the existing Grubstake structure will be demolished, there are plans to salvage, restore and reinstall many historic aspects, including signs, windows, murals and lighting. A virtual museum was developed to commemorate the building’s history and facilitate preservation of some features.

The project sponsor, 1525 Pine Street Holdings, LLC, which also owns Grubstake, is seeking a state density bonus to increase the height from the zoning-code permitted 65 feet to 83 feet. The proposed state density increase would accommodate an additional six residential units — up from 15 units initially proposed.

The Planning Commission will have two votes on the project at its March 18 meeting: one on whether to uphold staff’s findings on environmental impacts and the second on whether to approve a conditional use application to convert the space into mixed-use and utilize the density bonus. The second vote will also consider whether several variances to zoning codes are allowed, including the project’s lack of a rear yard and limited open space.

The proposed building would have active use of both of its street frontages — the redeveloped Grubstake on Pine, and a residential entry lobby on Austin Alley — and only six of the units have small balconies. The design includes a 749-square-foot shared roof deck, but that’s smaller than the more than 1,000 square feet of open space that would be required for the building’s size.

As proposed, the new development would also need to be exempt from new dwelling unit mix requirements adopted since the initial project application was filed in 2016. Rather than complying with the Polk neighborhood’s existing code, which requires 35% of new units to be two- or three-bedroom, the proposed project would have just 28% of new units larger than one bedroom, three each of two- and three-bedroom units.

The Polk district’s zoning also limits retail activity to 6 a.m through 2 a.m. Yet the Grubstake Diner has operated through 4 a.m. and the owners intend to operate a 24-hour diner once the restaurant reopens. The change in operations requires approval from the Board of Supervisors and the Planning Commission.

Separately, the most recent design plans do not include a 10-foot setback along Austin Alley, which has caused some neighbors to oppose the project due to its potential to shade and invade the privacy of residents in neighboring buildings. The plans have no off-street parking, other than 32 bicycle parking spaces.

Planning Commission staff have recommended that, although the proposed project has been appealed, its height, setback modifications and operational variances should be approved with some conditions. The Planning Commission meeting will be hosted virtually at 1 p.m. on March 18, and the 1525 Pine St. project is listed as agenda items 10 and 11.