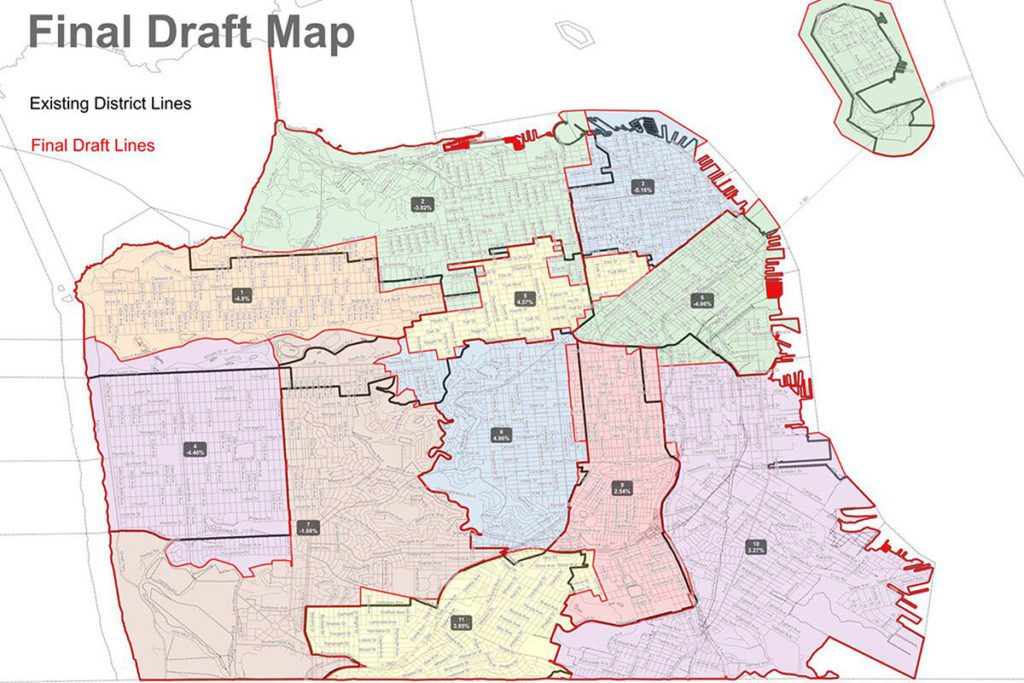 The San Francisco Redistricting Task Force lived up to its unpredictable reputation Thursday night, voting down an option to work from a previously preferred map and instead approving a final draft that redraws supervisorial districts and splits SoMa and the Tenderloin.

Nevertheless, the nine-member appointed panel left open the door for some minor tweaks next week, despite pressure from the City Attorney’s Office to finish the maps, which were due April 15.

The vote upset many residents who came to comment on the plan, leading to an outburst of yelling. “People, people!” shouted task force chair Arnold Townsend as he successfully pushed a compromise to take Portola out of District 10 and replace it with Potrero Hill and the Potrero Annex.

This move was the first of many changes meant to improve the lines. For example, the map was altered to shift West NoPa into District 5 and Lone Mountain into District 1. All the while, as the map took new form, task force members tried to balance out population averages; this led to other changes, such as moving all of Presidio Terrace into District 1, requiring a vote.

Some attempted moves, such as moving Chase Center from District 6 into District 10 and reuniting the Tenderloin and SoMa neighborhoods in District 6, failed to garner enough support from the task force.

Public comment covered issues across all districts and lasted until approximately 9:30 p.m. The comment period was dominated by requests to move the Tenderloin back into District 6.

“Those may not be the richest people or people you want to live next door to you but I don’t think they should be treated any less than anybody in D1 and that’s what I see happening,” said resident Brenda Barros. “That’s not OK.”

Ultimately, six hours later, the task force voted to accept the map as it was with the Tenderloin in District 5.

Task force member Chema Hernández Gil pointed out damning factors around the task force’s map as well as its productivity as a group.

“This is our 44th meeting and we are entering the 222nd hour. … For the sake of comparison, the previous task force only met 30 times for a total of 100 hours. This task force released their first working map on March 9 while the previous task force released its working map on Jan. 4,” he said. “We have had no in-district meetings other than the ones held at City Hall, and we have never discussed how to apply statutory criteria or how to fairly organize hundreds of public comments that we received.”

Hernández Gil went on to slam the map.

“Now we find ourselves here, having approved a second final draft map that moves more than 34,000 people living in the Tenderloin out of District 6,” he said.

Speaking over residents riled up by the appointee’s commentary, Deputy City Attorney Andrew Shen requested that the task force get him the map and its subsequent data as soon as possible so that he and his staff could turn it around for public review.

“We are simply running out of time at this point,” Shen said.

The lawyer issued a memo to the task force Tuesday requesting that it finalize a map Thursday evening in order for San Francisco to follow the Elections Code and host two public hearings. After blowing through the April 15 deadline set by the City Charter, the task force came to a decision so that small, clean up-type switches can be made to the map by the state’s May 2 deadline.

The task force will meet Monday and Thursday.