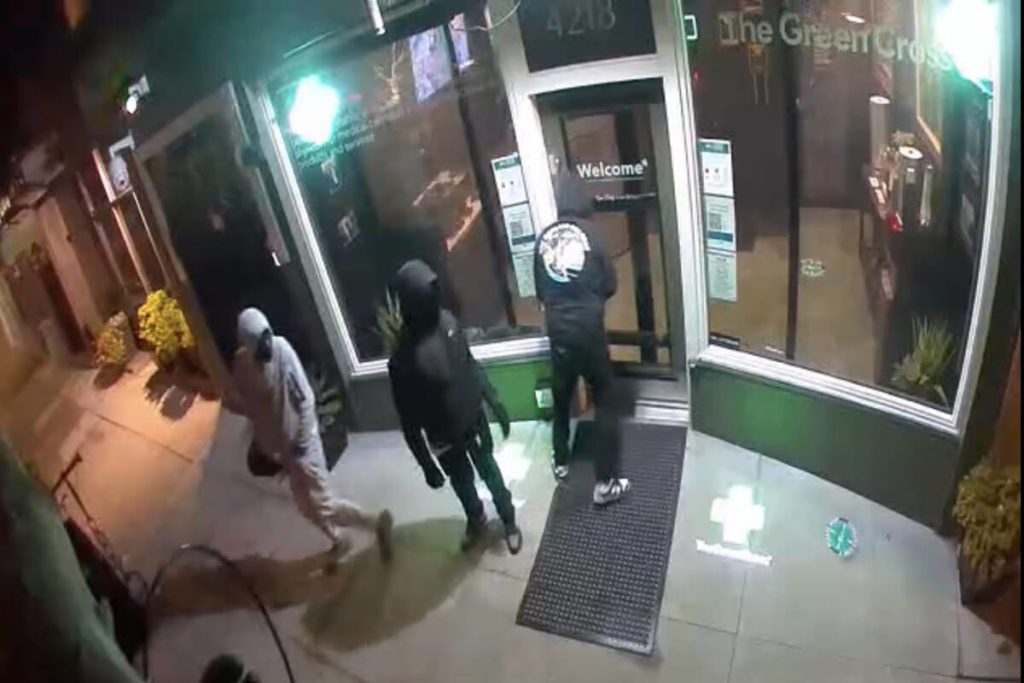 Among the more than a dozen smash-and-grab robberies in the Bay Area in recent weeks, cannabis facilities may have been the hardest hit.

In San Francisco, at least four cannabis businesses have been robbed in the last two weeks, according to news reports. At least 20 have been hit in Oakland, where most of the Bay Area’s cannabis cultivation, manufacturing and distribution facilities are located.

“It’s proving to be unbearable for cannabis operators,” said Amber Senter at an Oakland press conference held by cannabis business owners on Monday. Senter owns multiple cannabis business licenses in San Francisco and Oakland, and is also executive director of the industry group Supernova Women. “We need more protection, and we need more funds and resources to improve security, so we can protect ourselves.”

Alarmingly, many of the robberies have turned violent. Oakland Police Chief LeRonne L. Armstrong said in a press conference on November 22 that more than 175 shots were fired during recent cannabis robberies in Oakland this month alone.

Many cannabis business owners say police, both in Oakland and San Francisco, are slow to act. They point to surveillance video made public last week in which police appear to calmly stand by and watch as three suspects steal trash bags full of product from the dispensary BASA, in the North of the Panhandle neighborhood of San Francisco.

Cannabis businesses are a tempting target in part because weed is illegal under federal law. That makes it difficult for business owners to work with banks, most of which operate under federal charters. As a result most cannabis businesses operate in cash, and have at least $10,000 or more in cash on hand. Further, stolen cannabis products are incredibly easy to resell on the unregulated market.

At the Monday press conference, owners were quick to point out the robberies come on top of what they consider excessive taxation on cannabis products. Taxes, they say, are supposed to pay for public services, like the police, and they don’t believe they’re getting what they pay for. In Oakland, cannabis businesses are taxed at least 6% on sales, while other retailers are taxed at 0.12%.

“We’re paying all this money for basic government services — 600 to 900 percent more in sales tax, depending on the amount of revenue you generate, than a typical Oakland business,” says Senter. “This means we should have basic protection, right? You would think. But we’re just not getting that.”

The boarded-up storefront at The Green Cross cannabis dispensary following a November robbery attempt. Thieves have targeted the Excelsior District dispensary numerous times over the past year, most recently causing $18,000 in damages to their storefront windows. (Kevin Reed photo)

In San Francisco, a cannabis business tax which ranges from 1% to 5% dependent on gross receipts was already once delayed by the Board of Supervisors last year, due to what they considered an increased burden on small businesses amidst the pandemic. On Tuesday, supervisors passed another ordinance by Supervisor Rafael Mandelman of District 8 to suspend the imposition of the city’s Cannabis Business Tax again until Dec. 31, 2022.

The recent ordinance wasn’t originally intended to be a response to the rash of robberies. Rather, it was meant to encourage people to operate within the current regulated cannabis market.

High taxes, many believe, disincentivize illegal operators to join the legal market and customers from buying legal weed. A report by the California Legislative Analyst’s Office, for example, found that increasing taxes by 10% would result in a 7 to 22% decrease in legal cannabis consumption.

However, suspending the tax coincidentally responds to the call from business owners to lower taxes in the wake of the robberies, which Mandelman now willingly acknowledges.

“Cannabis businesses, along with many other retailers in San Francisco, are struggling under the weight of out-of-control retail theft,” said Mandelman in a press release. “San Francisco needs to do more to protect these businesses, their employees, and their customers before we hit them with a new tax.”