Breed taps Dorsey to replace Haney on Board of Supervisors 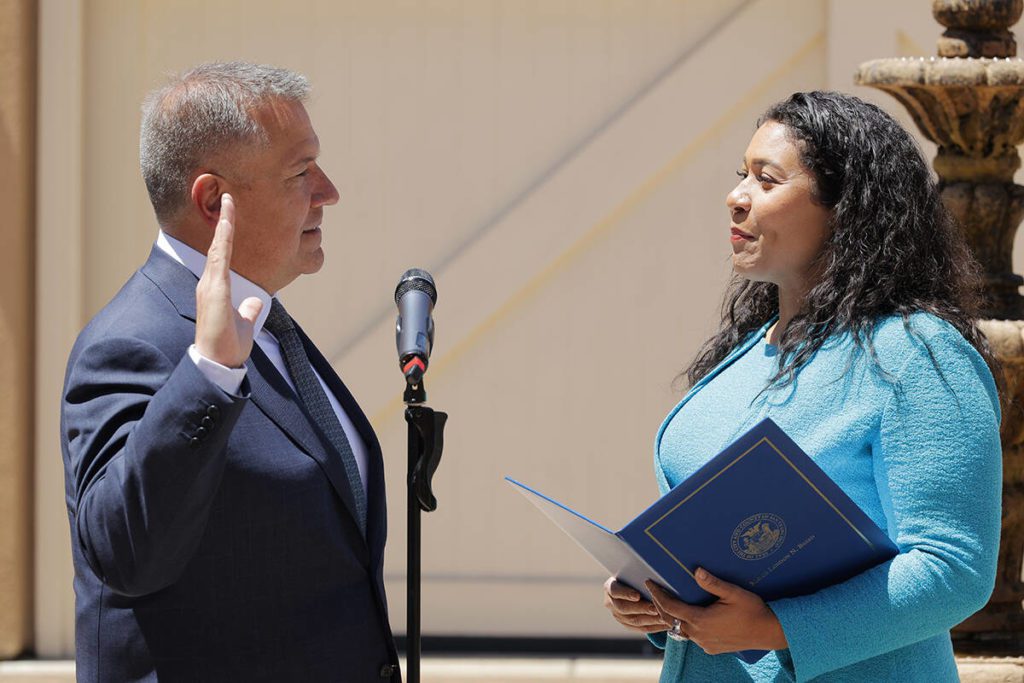 San Francisco’s political elite gathered on a sunny Monday afternoon to welcome a new member to the club, as Mayor London Breed swore in Matt Dorsey to the Board of Supervisors’ seat vacated by newly elected state Assemblyman Matt Haney.

Dorsey, 57, is a longtime behind-the-scenes operative in city politics, most recently working as director of communications for the San Francisco Police Department and collaborating closely with Chief Bill Scott on messaging and public relations. Prior to that, he held a variety of positions in governance, including a 14-year stint working under former City Attorney Dennis Herrera as a senior adviser. He will serve out Haney’s term and stand for election in the newly configured District 6 in November.

The newest supervisor, who was sworn in by Breed at the plaza adjacent to the Delancey Street Foundation’s treatment center on the Embarcadero, is a recovering addict who has suffered from drug and alcohol issues. He’s also a proud member of San Francisco’s gay community and is living with HIV. For those reasons, among many others, he says he feels uniquely suited to get the job done.

“People may know my resume and how it applies to work on the Board of Supervisors,” Dorsey told The Examiner. “But they may not know some of my personal stories, where my heart is and what led me to ask Mayor Breed to consider me for this appointment. I’m a person in recovery. I identify as an addict, an alcoholic. I have spent most of my adult life in recovery. But I’m also a three-time rehab graduate. And I’ve had setbacks, including one during the COVID lockdown.”

Dorsey, who ran nine marathons in his 40s and lives at Eighth and Market streets, told me his struggles with substance abuse give him an interesting perspective on The City’s growing drug problem, which is very much prevalent in SoMa. He thinks his life experience can help fix the problem.

At the podium of Monday’s ceremony, Breed spoke of a “very difficult process” in choosing Haney’s replacement, one that included hearing from District 6 residents and activists. She also referenced public safety as the key issue that surfaced during those conversations. Dorsey’s recent past with the SFPD is a clear signal to residents concerned about crime.

“As a longtime public servant, Matt Dorsey knows how The City works, and as a member of the recovery community, he can bring new energy and commitment to the crisis of addiction that is fueling our overdose crisis and impacting neighborhoods throughout this city,” Breed said in a statement to The Examiner. “San Francisco is facing a number of interwoven challenges around issues like housing, homelessness, mental illness and public safety. We need leaders like Matt who have the vision and experience to make the hard decisions. I’m confident he will be a passionate, collaborative member of the Board who is clear in his convictions, and that he will be a strong representative for the residents of District 6 and all of San Francisco.”

Scott joked he’s “a little ticked because we’re losing such a great guy.” But then got serious, saying Dorsey “always puts The City first.” Another former Dorcey boss, Herrera, told the mayor, “You could not have made a better selection. … People have been benefiting from Matt Dorsey’s public service for 20 years. They just didn’t know it.”

Dorsey’s name had surfaced in recent weeks as a strong candidate for the position. Haney recently won a runoff election against his prime competitor, David Campos, to join the state Assembly as the representative from District 17, once held by David Chiu, who was appointed City Attorney.

Haney was known as a relatively progressive member of the Board of Supervisors, representing a district that included San Francisco’s troubled Tenderloin neighborhood. Due to redistricting, Dorsey will inherit a different geographic area, which will include 76,000 San Francisco residents spread across South of Market, East Cut, Rincon Hill, South Beach, Mission Bay, Mid Market, The Hub (near Market and Octavia) and Showplace Square (Southwestern SoMa). Supervisor Dean Preston represents the Tenderloin, which is now in District 5.

“In the last two-plus years, I’ve worked on the command staff of the Police Department. The No. 1 issue I’ve worked on there is our city’s record-setting overdose drug crisis,” Dorsey said. “I’m on a monthly call with the office of the chief medical examiner, the Department of Public Health and others to preview the number of people who’ve died in the previous month. It’s hard to be somebody who works for a city department in a city that has the resources to do better than it’s doing. And I think we can debate whether the crisis in drug overdose deaths is a public health crisis or a failure in policing. But my sense is, fundamentally, it’s a failure in politics.”

That’s a pretty honest point of view, given Dorsey’s role with the police and the city attorney’s office prior. But he sounds straightforward about his motivations.

“I’m tired of feeling helpless. And I think being a voice from the substance abuse recovery community could bring perspective,” said Dorsey.

From a political perspective, Breed’s choice is clearly a move toward the center. Just six months ago, many assumed San Francisco’s current Democratic Party chair, Honey Mahogany, a progressive transgender political leader, was the front-runner for the position. But with Haney’s recent landslide election, in a race where he ran as a more moderate choice, and the ongoing polling that suggests progressive District Attorney Chesa Boudin could very well be recalled on June 7, Breed is clearly taking notice of which way the political winds are blowing. Dorsey is not a conservative by any stretch, but he’s center-left. And that seems to be where The City’s political future lies.

“It’s hard to know right now where the political winds are right now. My sense is that people are demanding solutions. There’s a quote from FDR, right before he became president, that is pertinent,” said Dorsey, who worked in the Clinton administration, focusing on Hillary Clinton’s health care initiatives.

“The country needs and, unless I mistake its temper, the country demands bold, persistent experimentation. It is common sense to take a method and try it: If it fails, admit it frankly and try another. But above all, try something. … We need enthusiasm, imagination and the ability to face facts, even unpleasant ones, bravely.”

Well, you can’t fault anyone for quoting Franklin Delano Roosevelt. But following up on these grand ideals is easier said than done. Dorsey acknowledges that and has some ideas on how to move forward. Asked what he will do for his constituency, he spoke plainly.

“I’m going to do the best I can to bring my personal and professional perspective to bear to solve our city’s problems,” said Dorsey. “My pitch to the mayor, about how I felt about The City and the difference I can make, is focused on the issues I want to work on. It’s not just about addiction and recovery. It’s about building more affordable housing, transportation and good government.”

The Arena, a column from The Examiner’s Al Saracevic, explores San Francisco’s playing field, from politics and technology to sports and culture. Send your tips, quips and quotes to asaracevic@sfexaminer.com. Sign up for his weekly newsletter here. And follow him on Twitter @alsaracevic.

Share
Facebook
Twitter
Pinterest
WhatsApp
Previous articleOpinion: How is a woman’s choice to carry a pregnancy to term a state issue?
Next articleOpinion: Recalling Chesa Boudin for not being ‘tough on crime’ makes no sense
- Advertisement -