The unfolding drama of redistricting 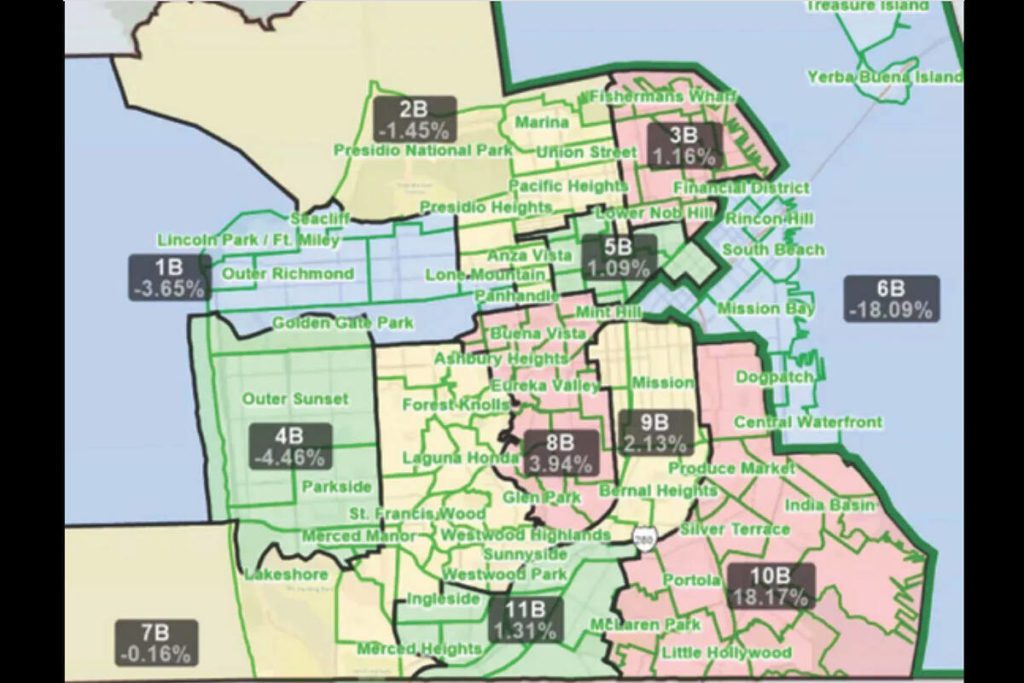 By the end of next week, San Francisco’s Redistricting Task Force will have voted on a new redistricting map, a guidebook by which supervisorial districts will abide by for the next decade.

But the journey of getting to the destination of redrawn lines is proving to be difficult for the task force.

After seemingly coming to a consensus last Saturday, the nine-member group reversed its selection of a preferred map at its following meeting Tuesday. In a shift from map 4D, the task force chose map 4B as a base to begin drawing district lines.

It was a contentious move. The subsequent meeting Wednesday night was dominated by more than 120 stakeholders who thought that there was a mutual understanding between the task force and its public – that a submitted “unity map,” which most closely resembled 4D, was the favored option.

In person and on Twitter, havoc ensued until past 3 a.m. Thursday.

What announcements were made as the Wednesday night redistricting meeting took form?

On Thursday morning, San Francisco Senator Scott Wiener confirmed the special meeting in a statement, but called it a “power grab.” However it’s unclear which members are being targeted.

The Elections Commission website Thursday afternoon lists a special meeting but does not clearly identify an agenda item that could potentially strip any member of their position.

“If the commission makes this move and replaces its appointees, those appointees will take their seats… literally the day before the task force is required to publish its final map,” Wiener wrote. “They would cast that critical vote without having participated in the months-long public process.”

“This undermines and corrupts what is supposed to be a transparent and non-partisan process,” Breed said. “This is neither transparency nor good government. The Elections Commission should recognize that a decision to remove members of the public who have served this city for months would destroy the integrity of the redistricting process.”

Regardless of who ends up on the task force, what are the potential effects of choosing either 4B or 4D?

The initial map, map 4D, keeps the SoMa and Tenderloin neighborhoods together in District 6. Though residents from other districts made their requests of the task force, the unification of the two neighborhoods was an ask from many surveyed in earlier months.

Map 4B, on the other hand, breaks up the SoMa and the Tenderloin by grouping parts of both with the Western Addition in District 5.

Many members and allies of the LGBTQIA+ community stood at the podium Wednesday and asked the task force to leave the community’s boundaries as is.

“This is a Goliath effort to make this area more conservative,” said Tenderloin resident Jupiter Peraza. “The Tenderloin and SoMa are filled with people just like me, first-generation immigrants and working class people who are translating their diasporas into tangible, visible reminders of where they come from.”

The first attempt to alter the map resulted in some consensual changes and other changes left at an impasse. For example, the task force agreed on keeping Potrero Hill whole through 16th Street in District 10 but disagreed on expanding District 4 into the Inner Sunset.

Why is the redrawing/remapping of supervisorial districts so contentious?

Redistricting, according to the city’s own website, is conducted with the results of each census in order to make sure districts are fair and proportionate. The San Francisco City Charter ensures that district boundaries adhere to local, state and federal laws — laws that call for equality not only through reasonably equal populations but also the grouping of communities who share similar ethnic, political or social interests (conveniently named “communities of interest”).

Keeping communities of interest together is beneficial to residents seeking “effective representation,” staff and consultants say.

Both District 5’s Preston and District 6 Supervisor Matt Haney oppose map 4B because, they argue, it would separate communities of interest.

“West SoMa, Central SoMa and the Tenderloin should stay together and stay in D6. Any map that pulls them out of the district or separates them is unacceptable and wrong,” Haney wrote.

Is there merit to the allegations coming from Supervisor Dean Preston that map 4B would gerrymander his district?

“The most conservative forces in this city realize they can’t win district elections in a fair fight, so they’re not just moving the goalposts, they’re throwing the rules out the window,” said Preston, who describes himself as a “progressive champion.”

While no task force member has responded to the claim of gerrymandering, Wiener generally slammed Preston for his suspectedrole in trying to remove three members and accused him of favoritism.

“It also speaks volumes that Supervisor Dean Preston… is leading the charge to get the Elections Commission to take this inappropriate, unprecedented step, based on his unhappiness with the proposed lines for his own district,” Wiener wrote.

As a practical matter, how much of a difference does redistricting make? Why should residents care?

The League of Women Voters of San Francisco, an entity that has been engaging the community about redistricting in its ongoing mission to improve and protect voting rights, explained that redrawn district lines affects political power.